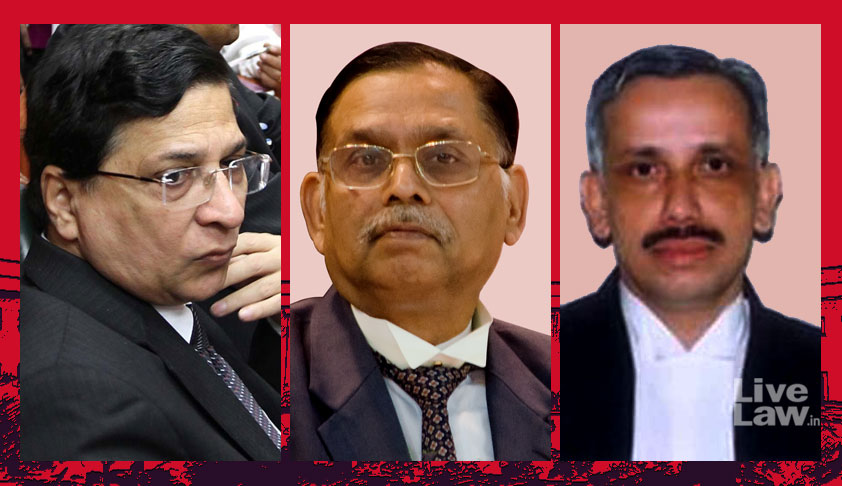 The Supreme Court bench of Justices Dipak Misra, Ashok Bhushan and S.A.Nazeer, today decided to begin hearing the Babri Masjid title dispute on the eve of the 25th anniversary of the demolition, on December 5.   Although the bench was keen to schedule the hearing earlier, it was the counsel, who sought more time from the bench, some of them wanting the bench to start hearing the case...

The Supreme Court bench of Justices Dipak Misra, Ashok Bhushan and S.A.Nazeer, today decided to begin hearing the Babri Masjid title dispute on the eve of the 25th anniversary of the demolition, on December 5.   Although the bench was keen to schedule the hearing earlier, it was the counsel, who sought more time from the bench, some of them wanting the bench to start hearing the case from January next year, as translation of the evidence, to English from languages like Sanskrit, Parsi, Urdu, Arabic etc., would take more time.   The  bench was not willing to schedule the hearing from January, as suggested, but agreed to postpone the hearing by two-to-three weeks from the date it originally suggested.    Uttar Pradesh insisted on early hearing, and suggested that translation of 8000 pages should not pose a problem.

However, counsel representing Sunni Waqf Board, Anup Chaudhary and senior advocates, Kapil Sibal and Rajeev Dhawan, representing some appellants, resisted early hearing, saying translations have to be reliable.  Although the bench was not happy about the time sought for translation, it agreed to give 10 weeks for the purpose.

When some of the counsel said, “heavens would not fall”, if the hearing starts from January, the CJI-designate, Justice Dipak Misra, quoting a writer, said the phrase is something of a oxymoron.  To this, counsel Rajeev Dhavan said, “heavens have already fallen” (meaning demolition has already taken place).  When the exchange appeared to become sarcastic, the Additional Solicitor General Tushar Mehta, representing Uttar Pradesh, intervened to suggest that the subject is too serious to be referred to sarcastically.  Rajeev Dhavan added to the sarcasm any way by suggesting that the bench’s suggestion to read the writer on “heavens would not fall” phrase, would mean taking more time, to schedule the next hearing.

The Shia Central Waqf Board of Uttar Pradesh, one of the appellants, told the bench that the translation of the evidence is not complete yet.  The bench then asked the U.P.Advocate General, whether he could organize a team for translation of the documents at the earliest.  There are 523 exhibits in the Allahabad High Court case, which is now under appeal in the Supreme court.

The hearing saw some interesting moments as the BJP leader and Rajya Sabha MP, Subramanian Swamy, sought to be considered as intervener in the case.  He said that after right to property ceased to be a fundamental right after the Emergency, following the 44th Amendment, fundamental rights take precedence over the right to property.  He suggested that his right to worship – a fundamental right flowing from Article 25 which guarantees right to profess belief and practice one’s religion – is at stake in the case.  The bench said it would give him the opportunity to make submissions after all parties are heard.  Earlier, Swamy insisted that he must be heard because another bench had tagged his petition with these title suits.

The bench made it clear that no adjournment would be granted and parties must abide by the time-frame.

The bench noted that there are 13 appellants.  According to the agreed plan, the main parties, namely, the deity Ram Lalla, U.P.Central Sunni Waqf Board, Nirmohi Akhara, the State of Uttar Pradesh, and several legal heirs and representatives of the deceased petitioners and appellants, would make their opening statements on December 5, and for two more days in  December before the Court would close for Christmas vacations.

In its interim order in 2011, the Supreme Court, while staying the Allahabad High Court’s verdict on the Ayodhya titlte suits, observed that the High Court’s September 30, 2010 decision, stipulating partition of the land where the Babri masjid stood between the two communities on the basis of the title dispute was strange and surprising.

Two parts of the complex were given to Hindu parties and one part to a Muslim party.  The High Court verdict was criticized for placing faith above law and, seemingly, expediency over legal principle.

The title suits had originated from the surreptitious installation of idols in the medieval mosque in 1949. But it conferred legitimacy on the 1949 act by accepting the claim that Lord Ram was born exactly where the central dome of the Babri masjid once stood.

The HC did not let the illegality of the 1949 and 1992 events have a bearing on the title suits.

On May 11, 2011, the Supreme Court bench of Justices Aftab Alam, and R.M.Lodha admitted a batch of appeals from both Hindu and Muslim organizations, and stayed the September 30, 2010 judgment of the Lucknow bench of the High Court that directed division of 2.77 acres of land of the disputed site into three parts among Hindus, Muslims and the Nirmohi Akhara.

Those who filed the appeals included the Sunni Central Wakf Board, U.P., the Nirmohi Akhara; the All-India Hindu Mahasabha and Bhagwan Shri Ram Virajman.

Justice Lodha had then asked the counsel, how could a decree for partition be passed when none of the parties had prayed for it.

The Wakf Board and Jamait Ulama-I-Hind have submitted that the High Court’s verdict should be quashed as it was based on faith and not on evidence.  The High  Court, they said, committed an error by holding that the building stood at the place of birth of Ram.

The claims of the three sets of plaintiffs were mutually exclusive in the sense that each set of plaintiffs claimed the entire property as its own and no one sought a decree for partition of property, it was pointed out.