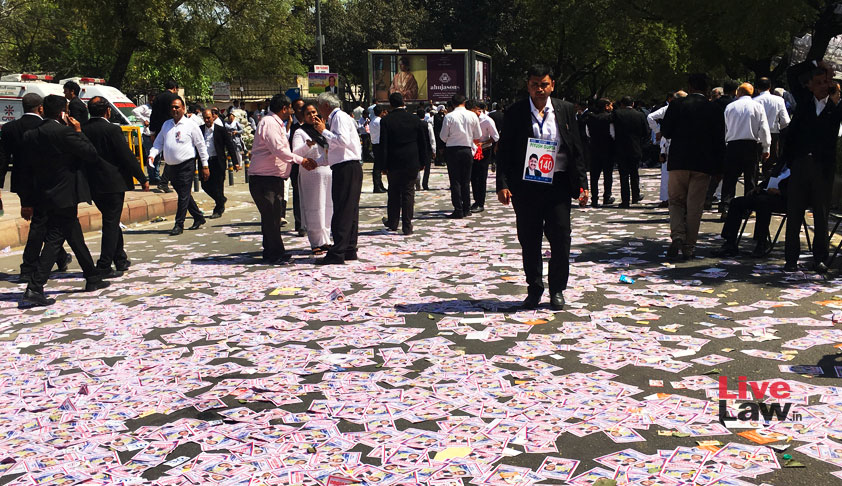 The former Acting Chief Justice of the High Court of Karnataka, Dr Justice GC Bharuka passed away in New Delhi in the early hours of Thursday and the cremation was happening on 16th morning (Friday) at Lodhi Road crematorium, New Delhi. A lawyer contesting in the Delhi Bar Council elections was found at the crematorium, shamelessly asking for votes. Shame on us!!! Right persons manning the institution is important to all institutions, and it is all the more crucial with respect to disciplinary authorities like the Bar Councils. Making the process democratic by way of electing the office bearers, is meant to serve the purpose. The membership in such institutions demand exceptional integrity, discipline, ethics, and morals, but the election campaigning modes adopted by many slay all expectations. 16th and 17th March were the voting days for election to Bar Council of Delhi. The Mathura Road and Sher Shah Road which converges at the High Court, where the polling was held, was strewn with banners and posters, resembling the general elections. All the littering and defacement of public roads and property were signatured by those who promise to bring in momentous changes in our legal landscape. All this is despite the fact that the Courts have repeatedly admonished such littering and defacement. If lawyers cannot follow such minimum etiquette and comply with judicial directives, nothing remains to be expected of others who aren't as acquainted as lawyers in matters of law. The least we expect of them is to maintain the dignity and decorum of the electoral process and give the noble profession the sanctity that is due to it.

To add insult to injury was the grotesque sight of lawyers in full robes, acting as walking election posters, with election banners and materials splattered all over and soiling the solemnity of the advocate’s attire. Such scenes are unseen even in college elections.

The candidates have even used their vehicles as billboards since hoardings are not allowed. Partying with expensive drinks unlimited is the new style of campaigning. Invitations to such parties are extended with an added request, the invitee could further invite as many lawyers as he possibly could. Numbers do matter, after all.