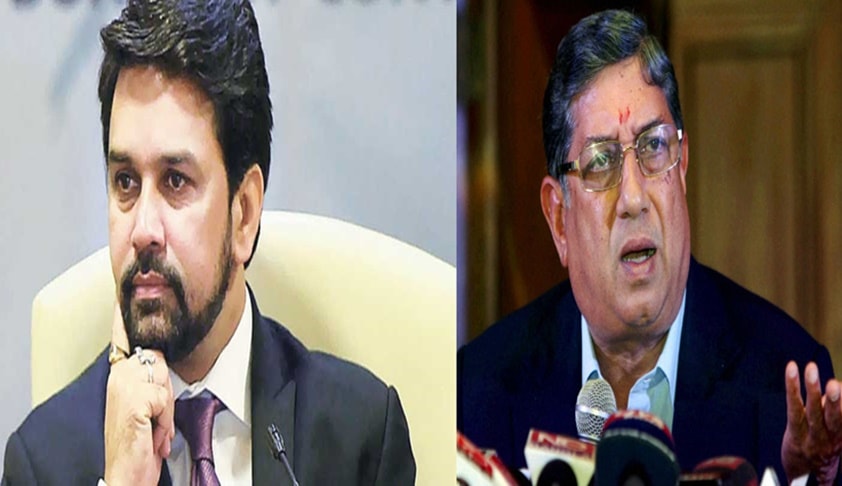 The Supreme Court today dropped perjury and contempt proceedings against former BCCI President Anurag Thakur after accepting his unconditional apology but its yet another former President N Srinivasan in trouble.

"I humbly submit that it was never the intention of the deponent to undermine the majesty of this court and since unintentionally some kind of misinformation and miscommunication has occurred, I unhesitatingly tender my unconditional and unequivocal apology to this court," Thakur had said in his affidavit filed yesterday.

Srinivasan who had been removed after being slammed by Supreme Court for blocking reforms made by the RM Lodha panel to change the governance structure in the Board of Control for Cricket in India has now offended the court by attending two BCCI meetings on May 7 and June 26 despite a bar.

The bench headed by justice Dipak Misra has issued a notice to Srinivasan.

Alongwith N. Srinivasan, former BCCI secretary Niranjan Shah of Saurashtra Cricket Association has also been sent a notice for attending BCCI meetings flouting age and tenure guidelines issues by the RM Lodha panel. Both Srinivasan and Niranjan Shah are above 70 years old and are thus ineligible to represent their associations at BCCI.

The fresh case against Srinivasan and Shah will be heard on July 24.

The Committee of Administrators, headed by ex-CAG Vinod Rai, in their fourth status report to the Supreme Court, complained against “disruptive and subversive conduct” of officials for blocking the Lodha reforms.

The Court meanwhile relieved Ramachandra Guha and Vikram Limaye from the four-member CoA that was appointed to oversee the implementation of Lodha panel reforms on the BCCI.

The court has asked for fresh names in a sealed envelope to replace Guha and Limaye, who has been appointed as Managing Director and CEO of National Stock Exchange.

Senior advocate Gopal Subramanium, who is assisting the court as amicus curiae in the matter, suggested six names for filling up the post of administrators fallen vacant after these resignations but the apex court sought suggestions from senior counsels like Solicitor General Ranjit Kumar, Kapil Sibal and others appearing for various parties in the matter in 10 days in a sealed cover, to be considered on September 5.