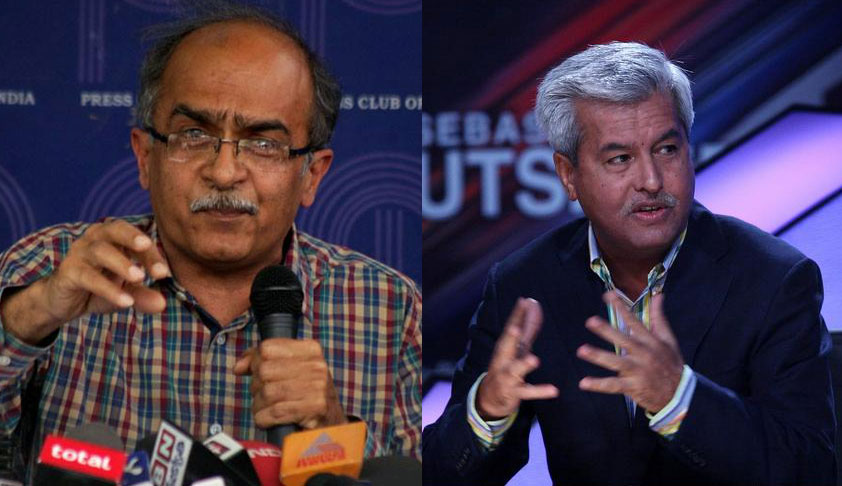 The Bar Council of India (BCI) has referred to Bar Council of Delhi (Special Committee) a complaint filed by Advocate R.P. Luthra demanding immediate disciplinary action against Mr. Prashant Bhushan and suspension of his certificate of practice for "gross professional and other misconduct". This Committee has been directed to constitute a sub-committee comprising any High Court Judge, a...

The Bar Council of India (BCI) has referred to Bar Council of Delhi (Special Committee) a complaint filed by Advocate R.P. Luthra demanding immediate disciplinary action against Mr. Prashant Bhushan and suspension of his certificate of practice for "gross professional and other misconduct".

In its resolution dated 21 January, the BCI General Council (GC) has directed the State Bar Council to ensure that the complaint is disposed of within 15 days, i.e. before 5 March.

Mr. Luthra's complaint had also leveled allegations against Mr. Dushyant Dave. The GC's resolution had then requested the Chairman, Vice-Chairman and the Chairman, Executive Committee to examine the material available on record and pass appropriate directions. Thereafter, on 24 January, the trio passed similar orders in relation to allegations of misconduct against Mr. Dave as well, directing the Bar Council of Gujarat(Special Committee) to look into the matter and decide on the complaint by 28 February.

The order makes reference to Mr. Dave's conduct in the Petition filed by Congress leader Tehseen Poonawalla demanding an independent probe into the alleged mysterious death of CBI Special Judge B.H. Loya. There were reports that allege that Mr. Dave had advised Mr. Poonawalla to withdraw his petition from the Apex Court "casting some allegations against one of the Hon’ble Judge of Supreme Court".

Commenting on his conduct, the order states, "This conduct prima-facie appears to be unprofessional.  The various statements of Mr. Dave made in and outside the Court make it clear that Mr. Dave is acting at the instance of some lobby which is at work to maneuver a particular case in a particular manner either to score political points at the forum of Supreme Court and other Courts and/or to gain publicity on the media.  Prima-facie, it appears that by doing this, Mr. Dave has been maligning the image of the profession as well as of the Institution."

The order also talks about a recent hearing in Judge Loya case, wherein Mr. Dave had opposed Mr. Harish Salve's appearance on behalf of the State, citing a conflict of interest as he had appeared for Mr. Amit Shah in the Sohrabuddin case. This had led to a heated exchange between the two lawyers, prompting the Bench to intervene. You may read the entire exchange here.

The order, therefore, asserts, "... from the entire conversation, as well as the regular derogatory statements issued by Mr. Dave for last few months against the Judges or some Advocates, prima-facie it appears that Mr. Dave has been committing serious misconduct. The media reports prima facie show that the entire legal fraternity as well as the institution is being damaged by such reckless, deliberate, contemptuous and derogatory statements of Mr. Dave."

In his complaint, Mr. Luthra makes reference to the petition filed by Mr. Bhushan in the medical college bribery case, highlighting the fact that it was filed despite the pendency of a similar petition filed by Advocate Kamini Jaiswal.

It may recalled here that the Apex Court had dismissed CJAR's plea, observing that it was "wholly frivolous…contemptuous, unwarranted, aims at scandalizing the highest judicial system of the country". The Court had also imposed costs of Rs. 25 lakhs on it.

Quoting several passage from this judgment, Mr. Luthra also raises the issue of the complaint made by the executive committee of the Campaign for Judicial Accountability and Reforms (CJAR) seeking an in-house inquiry against Chief Justice of India Dipak Misra in relation to the same case. The complaint had been made to five senior-most judges of the Apex Court after the CJI i.e. Justice J. Chelameswar, Justice R. Gogoi, Justice M.B. Lokur, Justice K. Joseph and Justice A.K. Sikri.

Censuring Mr. Bhushan for this complaint, Mr. Luthra now asserts, "Even after such serious remarks/ strictures against him, Mr. Prashant Bhushan has not only filed this frivolous and scandalous complaint but has also released it in media. By doing so, Mr. Prashant Bhushan has again committed a gross professional misconduct and has made a deliberate attempt to tarnish the image of our apex Court and its Judges...

...We all know that such claim is baseless, but such statements and acts are badly maligning the image and reputation of our senior-most 2-3 Judges in public. And these matters have nowdays being openly discussed on media channels."

He further alleges that Mr. Bhushan and Mr. Dave have been "gossiping" in the Supreme Court that a "very senior Judges" and his relative who is a High Court Judge are "managing the High Court and some Supreme Court Judges and earning huge money". This issue, he says, needs an in-house enquiry.

The complaint finally states, "Therefore, I humbly request the Bar Council of India, the apex Statutory Body of Advocates to suspend the Certificate of Practice of Mr. Prashant Bhushan for whole life so that the dignity and decorum of the Institution could be maintained and such nasty activities could be stopped."

Dynamic Injunctions In India
Latest News
+ More
1Child In Conflict With Law Gets Bail After 3 Yrs Custody; Orissa High Court Raps Police For 'Lackadaisical Attitude'
2'Litigation Dragged To Court, Reflects Sorry State Of Affairs': Jharkhand High Court On Govt Dept's Failure To Satisfy Compensation Award
3We Have To Address The Issue Of Freedom Of Speech Together As A Society: Justice Ravindra Bhat
4Bombay High Court Weekly Round-Up: May 9 To May 15, 2022
5Commission Paid To Persons Who Are Not Beneficial To Business Of Assessee Is Taxable : Orissa High Court
6Arbitration Cases Weekly Round-Up: 8th May to 14th May, 2022
7Gujarat High Court Weekly Round Up: May 9 To May 15, 2022
8Tax Cases Weekly Round-Up: 8 May To 14 May, 2022
लाइव लॉ हिंदी
+ More
International
+ More
1Abortion Laws In The US And Other Countries
2Leaked Draft Judgment Of US Supreme Court Indicates Overruling Of Roe v.Wade Abortion Rights Decision
3The Indian Connection With Pak Decision To Live-Stream Court Proceedings
4Russian Suspension At The Human Rights Council: Band-Aid On A Bullet Wound?
Environment
+ More
1Supreme Court Permits E-Rickshaws In Matheran As Pilot Project To Check Feasibility
2In Case Of Doubt, Protection Of Environment Would've Precedence Over Economic Interest: SC Revokes Approval For Doubling Castlerock to Kulem Railway Line
3NGT Bars Auroville Foundation From Township Construction Till Environmental Clearance Is Obtained
4Ghazipur Landfill Fire: NGT Says Dump Sites In Cities Are Like 'Time Bombs', Constitutes Joint Committee Headed By Former Delhi High Court Judge