Before Blaming Lawyers, Judges Need To Introspect: BCI Resolution Requests SC, HC Judges To Not take Up Post-Retirement Jobs For At Least 2 Yrs 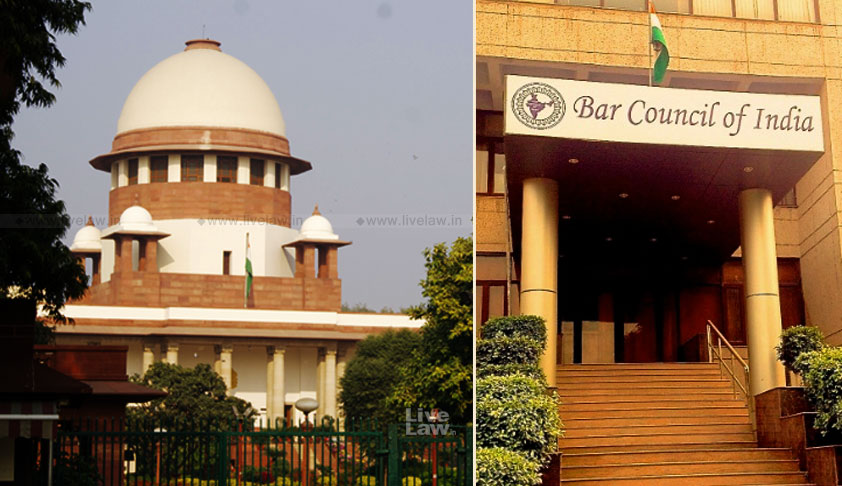 It ends with posing faith in outgoing Chief Justice of India Dipak Misra, expressing hope that he would not take up any post retirement job, following the example set by Justice Chelameswar.Asking judges to introspect before “blaming or controlling the Bar”, the Bar Council of India (BCI) has requested the judges of the Supreme Court and all High Courts to not take up jobs for at least...

It ends with posing faith in outgoing Chief Justice of India Dipak Misra, expressing hope that he would not take up any post retirement job, following the example set by Justice Chelameswar.

Asking judges to introspect before “blaming or controlling the Bar”, the Bar Council of India (BCI) has requested the judges of the Supreme Court and all High Courts to not take up jobs for at least two years after their retirement. The resolution, it said, was passed during a joint meeting of the BCI with the representatives of State Bar Councils and High Court Bar Associations.

In a press release, BCI recalls the furore over former CJI, Justice P. Sathasivam’s appointment as the Governor of Kerala after his retirement, and asserts that such post-retirement assignments, “put a question mark on the fair discharge of judicial functions by the Judge in question during the concluding part of his tenure”.

It then spirals back to the judgment in Mahipal Singh Rana vs. State of Uttar Pradesh, when the Apex Court had highlighted an urgent need for review of the provisions of Advocates Act, 1961. A three Judge Bench comprising Justices Anil R. Dave, Kurian Joseph and Adarsh Kumar Goel had also requested the Law Commission of India (LCI) to take up the matter.

The LCI report released pursuant to this judgment had suggested drastic changes to the Advocates Act, attracting the wrath of lawyers throughout the country. Making reference to this judgment and LCI report, the release points towards the role of a particular Supreme Court judge in passing orders “with sole intent to shut the mouth of the Bar”. The same judge, it said, was a part of the bench that had opined that “strikes are in violation of law laid down by this Court”, and that “the office bearers of the associations who give call for the strikes cannot disown their liability for contempt”.

Without taking any names (but with a more than clear indication towards speaking about Justice AK Goel, who is now the NGT Chief), the release then raises doubts over the veracity of these judgments, in the light of the fact that the judge was offered a “very lucrative assignment” after retirement. Pointing towards judges being influenced by such offers, it then states,

“The feeling of Bar was/is that such impractical, utopian orders are passed at the behest of some powerful people, so that they can do anything, could make even anti-people or anti lawyer draconian Laws; and Bar could be compelled to be a silent spectator. The opinion of Bar Leaders in the joint meeting is fortified with the fact that the said Judges got a very lucrative assignment within a month of his retirement from Supreme Court. How the people of this country can have faith in this type Judges?(sic)”

The BCI also tries to justify its stand, stating that BCI and State Bar Councils are never in favour of strikes, and have in the past taken stern action against erring advocates, if such strikes have been found to be unjustified or uncalled for.

“Bar Council of India has always tried to maintain the decorum of the Institution and to protect it. For improving the standard of profession and of Legal Education, Bar Council of India and State Bar Councils have been taking all possible steps. On all fronts, we have tried to involve the Judges (sitting and former) in order to seek their guidance…

…But we fail to appreciate the hostile attitude of some of the Judges of the country towards Bar and their Institution,” the release says.

It in fact alleges that the judiciary is being used to throttle the bar’s voice, and then calls for introspection by the judges, stating, “Before blaming or controlling the Bar, our Judges will have to introspect themselves. They forget that they were also the members of same Institution before their elevation and they are to join this institution again after their retirement.”

It thereafter expresses its dissatisfaction with the sort of cases that it feels judges are focussing on, stating that traditional litigations are suffering due to “media-popular matters”. It states, “The traditional litigations, for which the courts are made, are being ignored, most of the Judges have no interest in such cases and the result is that theses cases poor and common litigants are rejected mercilessly.

Major time of courts are wasted on media-popular matters with which 99% of citizen of our country have no concern at all. It appears that most of our Judges are far-far away from the ground realities and the public opinion over the social issues. Orders are being passed, Laws are being laid down against all sorts of set social and religious values and norms.”

The release then lauds the initiative taken by Justice J. Chelameswar and Justice Kurien Joseph in publicly announcing that they would not take up any post retirement jobs. It states that this “would go a long way in promoting a healthy democracy in the country”.

It ends with posing faith in outgoing Chief Justice of India Dipak Misra, expressing hope that he would not take up any post retirement job, following the example set by Justice Chelameswar.