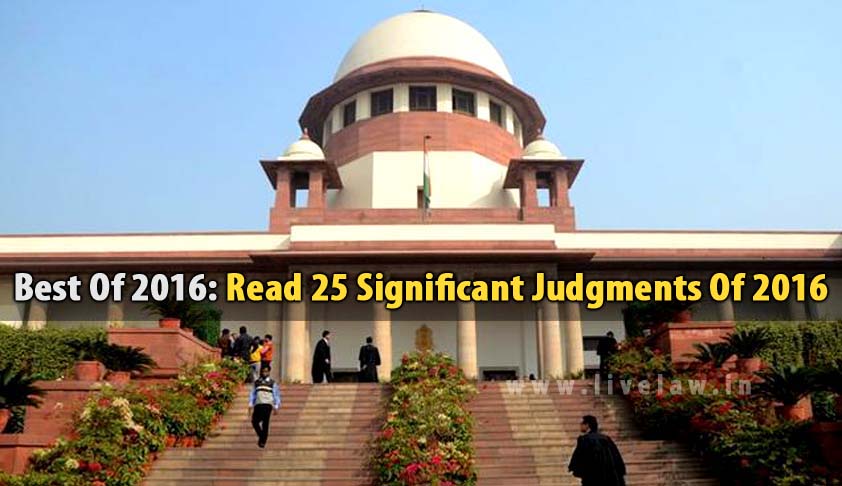 In 2016, the Supreme Court has pronounced over thousand judgments, and it is pleasure to announce the Live Law has reported most of it.  While all of them are significant, as it comes from the Apex court of the country whose rulings have a force of law, some are more significant in view of the subject it dealt with and also the law it laid down. Following is a list of such 25 significant judgments of the year 2016. The list features judgments like the one which upheld constitutionality of the criminal defamation law, that which made it mandatory to make FIRs available online, and also touching Cauvery dispute and the NEET entrance test.

Supreme Court of India issued a direction to all the concerned authorities to follow the Constitutional bench judgment in Kedar Nath v State of Bihar (1962) which limited the scope of Sedition Law (Section 124A) in India. The Supreme Court has said that all authorities would be bound by the Kedar Nath judgment when dealing with cases of sedition. Supreme Court made the observations in Petition filed by NGO ‘Common Cause’ and Dr. S.P. Udayakumar.

And the most controversial order of 2016

National anthem must in Theatres [Shyam Narayan Chouski vs. Union of India] The Supreme Court made it mandatory for all cinema theatres to play the national anthem before a movie begins during which the national flag is to be shown on the screen. A bench of Justice Dipak Misra and Justice Amitava Roy also said that everyone present in cinema hall should rise up and pay respect to the anthem when it is played.