Bharat Bandh: Know your rights and duties during Hartal 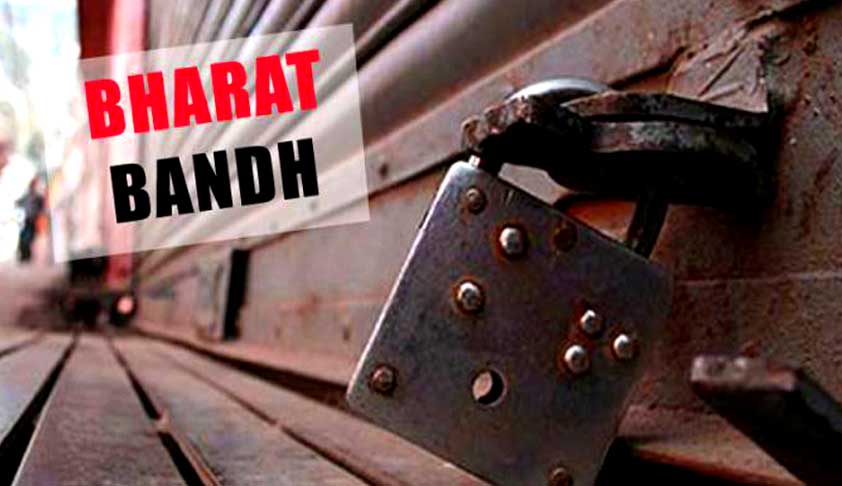 Are you legally bound to stay put in your home on a hartal day? Is it legal to bring essential services like banking and public transport to a grinding halt? What are your rights and duties on a hartal day? To know, read on…

Over 15 crore workers in central public sector undertakings are expected to go on a nation-wide strike today in response to the Bharat Bandh call by 10 Left-affiliated unions in protest against ‘anti-labour’ policies of the government, bringing normal life to a halt. The possible fallout of the strike could mean a shutdown of banks, factories and government offices across the country.

However, the political parties and organizations that call for strike, purportedly espousing the cause of public, should realize that they are, in effect, harming the public itself.

Citizens should realize that they have fundamental rights and that the Indian Penal Code and other penal legislations, which criminalizes intimidation, restraint, etc., has application during hartal days also.

Calling for a bandh by any association, organisation or political party and the enforcing of that call by it is illegal and unconstitutional. We direct the State and its officials, including the law enforcement agencies, to do all that is necessary to give effect to this declaration. Bharat Kumar K. Palicha and Anr. Vs. State Of Kerala AIR 1997 Ker 291

In The Communist Party Of India (M) vs Bharat Kumar the Supreme Court has confirmed the Kerala HC Judgment. The Bench held as follows:

"There cannot be any doubt that the fundamental rights of the people as a whole cannot be subservient to the claim of fundamental right of a n individual    or only a section of the    people. it    is on    the basis of    this distinction that the High Court has rightly concluded that there cannot be any right to call or enforce a "Bandh" which interferes with    the exercise of the fundamental freedoms of other citizens,    in addition to causing national loss in may ways.    We may also add that the reasoning given by the High Court, particularly those in paragraphs 12, 13 and 17 for the ultimate conclusion and directions in paragraph 18 is correct with which we are in agreement.    We may also observe that the High Court    has drawn    a very appropriate distinction between a "Bandh"    on the    hand and a call for general strike    or "Hartal" on the other.    We are in agreement with the view taken by the High Court".

2004: SC holds that there is no right to cause inconvenience in the name of hartal

In the name of hartal or bandh or strike, no person has any right to cause inconvenience to any other person or to cause in any manner a threat or apprehension of risk to life, liberty, property of any citizen or destruction of life and property, and the least any Government or public property. James Martin v. State of Kerala (2004 (1) KLT 513 (SC)).

2004: Kerala HC says hartal should not obstruct others’ fundamental rights

A Full Bench observed: But whatever name it is called, whether general strike, hartal or any other name, nobody can create a Bandh-like situation or obstruct the fundamental rights of others….Those who call for ‘hartals’ or strikes by whatever reason must make it clear in their call that nobody will be compelled to participate in the ‘hartals’ or strikes, that traffic will not be obstructed and those who are willing may go for work and that fundamental right of others to move about will not be affected. They must also instruct their supporters to see that no coercion or force is used for compelling others to participate in the strike or ‘hartal’. (Kerala High Court: George Kurian vs State Of Kerala 2004 (2) KLT 758)

The High Court observed in The Proper Channel vs. Managing Director, KSRTC:

“It is therefore necessary that the Government should step in and provide a simple and easy method to any person, including statutory Corporations like KSRTC or a private individual, to claim compensation for any loss they may suffer on account of such `forced hartals'. Appropriate legislation should be enacted granting suo motu powers to a competent authority to call for claims, assessment of compensation, recovery etc. Unless such measures are taken, the menace of `forced hartals' cannot be curbed.”

From the reading of the above judgements it is very clear that there is no right for organizations to call hartal/strikes. Instead, it is the right of an individual to get assurance from such organizations that call for hartal/strikes that he will not be stopped from travelling or working despite the hartal. On any day, a citizen of India has the right –

Meanwhile, the organizations that call for hartal should follow the dicta laid in the judgments of the Supreme Court and the High Court. They are duty bound to: