Bhima Koregaon Case: Just Because Adv. Surendra Gadling Argued For Prof. Saibaba, He Is Being Treated Like A Third-Grade Criminal: Anand Grover To SC 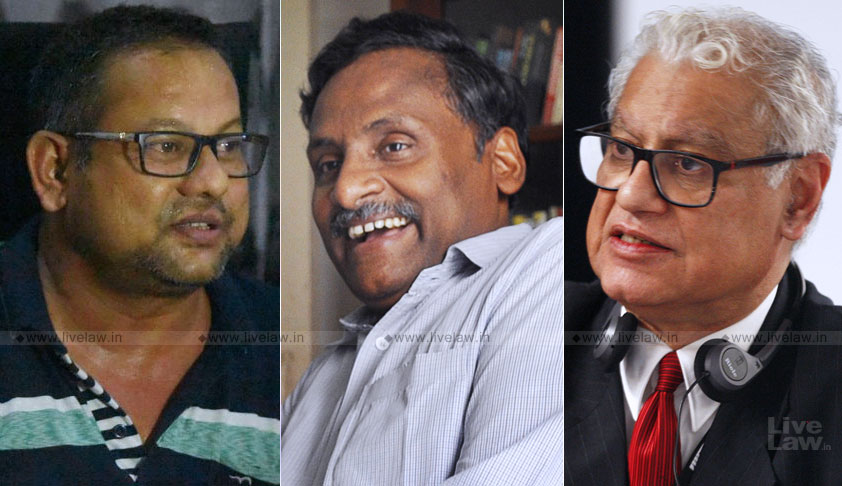 The Supreme Court bench of Chief Justice Dipak Misra, Justice D. Y. Chandrachud and Justice A. M. Khanwilkar adjourned to Monday the hearing on the PIL by historian Romila Thapar and four other eminent persons over the arrest of five activists in connection with the Bhima-Koregaon violence.

The bench clarified that the its interim order placing the five accused under house arrest shall continue until the next hearing.

On Thursday, Senior Counsel Anand Grover, appearing on behalf of lawyer Surendra Gadling, one of the accused, drew the attention of the court to an additional document- “It is the Hon’ble Chief Minister’s speech...we have put it on affidavit that the advocate was threatened...’You will be next’, it was said...the lawyer is in hospital and wants to argue his case but is not being allowed...”

“He is an advocate of 25 years of experience...”, he continued, stressing that Gadling had appeared as a defence counsel for Delhi University Professor and Maoist activist G. N. Saibaba.

“When a lawyer is arrested, we know our responsibility...”, countered ASG Tushar Mehta, adding that he shall show the bench the relevant records.

“No, you do not! Just because he appeared for Saibaba, he is being treated like a third-grade criminal”, argued Mr. Grover.

Further, in context of Gautam Navalakha’s, another accused, transit remand from Saket to Pune, which the Delhi High Court had earlier stayed, subsequently halting the proceedings in deference to the hearing in the apex court, the ASG objected to taking recourse to two remedies, before the High Court as well as the Supreme Court.

“Please take it as a jurisprudential issue now. The affected parties have joined as intervenors here while their cases are also being examined by the jurisdictional courts...others (the other activists) have also moved the High Courts, like the Punjab & Haryana High Court”, advanced the ASG. Justice Chandrachud noted that Navalakha is not a party before the apex court.

It may be noted that last week, four out of the five accused, namely Advocate Sudha Bharadwaj, Vernon Gonsalves, Varavara Rao and Arun Ferreira, have filed a supplementary affidavit seeking impleadment to the proceedings before the Supreme Court.