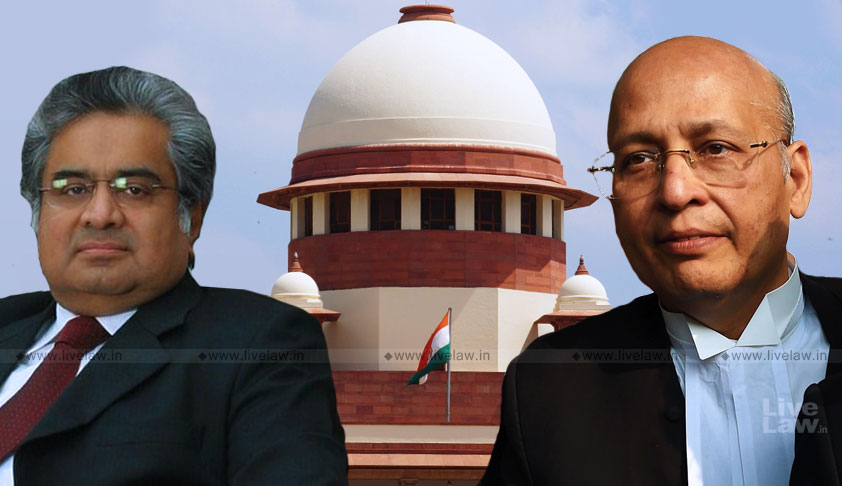 As the hearing on the plea for a SIT probe into the Bhima-Koregaon violence resumed on Thursday, ASG Tushar Mehta, appearing on behalf of the state of Maharashtra, continued walking the apex court through the evidentiary material retrieved from the laptops, harddisks and pendrives of the accused activists.In the light of Justice D. Y. Chandrachud’s remarks on Wednesday, he assured the...

As the hearing on the plea for a SIT probe into the Bhima-Koregaon violence resumed on Thursday, ASG Tushar Mehta, appearing on behalf of the state of Maharashtra, continued walking the apex court through the evidentiary material retrieved from the laptops, harddisks and pendrives of the accused activists.

In the light of Justice D. Y. Chandrachud’s remarks on Wednesday, he assured the bench headed by Chief Justice Dipak Misra that he shall toe the line of distinction between documents that simply embody an opposition to the government and those which represent a subversion of the law and order against the government.

The ASG drew the bench’s attention to several pieces of communication exchanged between the activists, reading excerpts from them- “uncertainty is growing....the enemy forces are strengthening....we are in the process of regrouping and deploying more guards....we need to increase our strength in this region as we have suffered a major setback here....we are waiting for information to gauge the strength of the enemy forces, the ROP (Road Opening Party) shall go before we launch the attack....”

He indicated the mention of guerrilla warfare and Low Intensity Conflict (LIC).

The ASG quoted the talk about “transfer of funds towards the expenditure of further operations” and the supply of some other material which he deliberately refrained from naming. He showed that an activist lawyer, who was subsequently arrested, was being scolded for having been unable to arrange the funds and that the advocate even offered a justification.

Mr. Mehta referred to a statement in the communications recovered that “there are less enemy forces in these six regions and we will find it easier to ambush”. “Four of these places were actually ambushed!”, he corroborated.

A few exchanges the ASG cited were in Hindi-

“in the previous attack, 10-12 members of our group were killed. This will affect the morale of others. So go and say that those died were ‘Adivasis’ (tribals)”

“The investigation is ongoing at the ACP level, supervised by the DCP and under the overall care of the DG....the laptops, computers, harddisks, pen drives, memory cards of the accused were forwarded to the FSL (Forensic Science Laboratory) and the time and date of the document and who sent it to whom is clear....we could not have been planting these materials for 6 years only to recover them now....we also have the last log-in and log-out timings which show there has been no interception”, advanced Mr. Mehta.

He urged that the bench not allow the prayer for an independent investigation relying on several cases- “we are at a very premature stage right now....we are not questioning Your Lordships’ jurisdiction but this is not the case where it needs to be exercised....there is no vested right of the accused to seek a monitored investigation....no interference in criminal matters is permitted at the behest of strangers under the garb of a PIL”

On Wednesday, the ASG had argued that of all the activists rounded up in the investigation, only Advocate Surendra Gadling and Shoma Sen have applied for bail; the others not having done so because “they know what has been recovered from them”. “Even Gadling has not proceeded with his bail application. Should he want to, I have no objections. Your Lordships may direct the bail to be decided on merit”, he concluded.

In his turn, Senior Counsel Harish Salve, representing the original complainant and an intervenor before the Supreme Court, Tushar Damgude, submitted, “Yesterday Your Lordships took the view that when such kind of cases come before the court, they shall be examined with a hawk’s eye. That should be the approach where civil liberties are involved....we do have challenges where there is an amalgam of ideologies. But to what extent do we allow an ideology in the market place of ideas? Where do we draw the line?....The second area is what constitutes sedition. Merely saying that the country is not governed well or that the Constitution is not good enough is not seditious. Several senior politicians have made such statements. But there is a distinction between free speech, free thought and unlawful activity....”

“It has become a ‘cut, copy, paste’ template prayer to ask for a SIT. But it has to be seen if the investigation in question is intended to foster a political idea or directed towards detecting acts contrary to the law. In case of the latter, the investigation must be allowed to continue. A SIT may not be set up where an investigation is underway unless Your Lordships have reason to believe that such investigation is not proceeding correctly. A SIT is intended to avert the risk of an investigation being derailed by those who can intercept....if there is no evidence, the accused shall be acquitted upon trial. Even in the 2G case, which involved investigation into allegations of bribery against a minister in office, all accused were freed by the judge, stating that no sufficient evidence was produced in two years....this is, in fact, a problem in our system that our trials are adversarial and not inquisitorial and the judge is confined to the evidence lead by the prosecution”

“To say that we subscribe to a particular ideology and hence, cannot trust this government is a motion of no-confidence against the entire system. Then you cannot trust the Maharashtra government or the NIA (National Investigating Agency) or any other entity....there are four tiers of adjudication- the magistrate, the sessions court, the High Court and ultimately, Your Lordships are here. These prayers for a SIT are not called for. It cannot be a ritual in continuation that I am not happy with the investigation, so I will throw some muck and get a SIT”, Mr. Salve rested his case.

Commencing his rejoinder arguments, Senior Advocate Abhishek Manu Singhvi advanced, “it is common ground that the two FIRs (of January 2 and January 8) do not mention anyone of those in my batch (the five activists arrested in August)....the retired judges who had organised the event (Elgar Parishad) have agreed to it in writing, which forms a part of my rejoinder, and on the TV, but they have not even been interrogated so far because the truth is inconvenient!”

Indicating three letters of the months of April December of last year and one undated, which form a part of the total of 13 which were flashed and distributed by the Maharashtra police on August 31, he argued, “these letters were intended to create a subtext of a real threat by connecting these people to a Maoist plot....letter dated April 18, 2017 is from one ‘R’ to ‘Prakash’ and speaks of a ‘Rajiv Gandhi kind of incident’, the one dated December 26, 2017 is again between the same persons and talks of the purchase of equipment. The third is from ‘Prakash’ to Rona Wilson and discusses the funds utilised by the Tata Institute of Social Sciences....there is no mention in either FIR of this plot to attack the office of the Prime Minister on the lines of the Rajiv Gandhi assassination? Not even a fresh FIR?”

“The heart of the case diary was distributed! A day later, NDTV held a programme where these letters were discussed. I have attached the CDs and the transcripts of both this programme and the press conference by the ADG of Maharashtra Police”, he continued.

Cutting through Dr. Singhvi’s monologue, Mr. Salve raised objections- “I have not seen these papers. The Maharashtra Commissioner has to answer if he has distributed these. The person who is alleged to have distributed them should have been in possession of these documents. How do we know they (the petitioners) have not given them?”

Dr. Singhvi replied that he has procured the documents from the concerned TV channels.

“Did Parambir Singh (Maharashtra ADGP) flash some letters at the press conference or not?”, inquired Justice Chandrachud.

“This is too serious a matter to be filed on affidavit”, responded Mr. Salve.

“The incident transpired in December last year, the raids were conducted in April, the first round of arrests was made in June even without an interrogation and then, in August, my batch was picked up on the allegation of some Maoist plot? If the Maoist plot had surfaced in April, why were there no arrests until August? This is an ex-post facto prosecution, this allegation is an afterthought! There is no whisper of a maoist plot in the FIRs! It comes up only in these letters which were found on the computer of a third person and which were not placed on record in any court of law, not even in the transit remand applications!”, Dr. Singhvi pressed.

It was his case that such a disclosure would be inadmissible under the Unlawful Activities (Prevention) Act by virtue of section 25 of the Evidence Act.

He repeated that the letters are fabricated as they have been either written to or by one ‘Comrade Prakash’, who is none other than Delhi University Professor and Maoist activist G. N. Saibaba and who has been in jail since March, 2017 and consequently, could not have addressed such communications. He reiterated the finding recorded in Saibaba’s conviction order that the latter operates under the name ‘Prakash’. Countering the ASG’s submission that the said order also avers that post the trial, Saibaba had changed names from ‘Prakash’ to ‘Chetan’, Dr. Singhvi said that Saibaba has several pseudonyms, though the name ‘Prakash’ has not been found to correspond to any other individual.

“Republic TV had hosted a show on July 4 over these letters. The very next day, Sudha Bharadwaj (advocate and one of the accused activists) had issued a public statement denying it. Subsequently, she had sent a legal notice on July 16. Republic TV had replied on August 7 that they have received the letter from a confidential source and that they stand by it. This is the level of the percolation into the press!”, contended the Senior Counsel.

He once again expressed his surprise at the ‘Panch’ witnesses having been clerks in the Pune Municipal Corporation in a departure from the procedure which envisages local residents- “they were imported over a distance of 600 kilometres from Pune? the ‘Panchas’ are not appointed to ensure that the conviction succeeds (in response to the ASG’s explanation that responsible government servants were chosen as witnesses to avoid a situation where the ‘Panchas’ turn hostile)....this fails section 41B (of the Cr. P. C.)”

The bench, also comprising Justice A. M. Khanwilkar, reserved its judgment on Thursday.