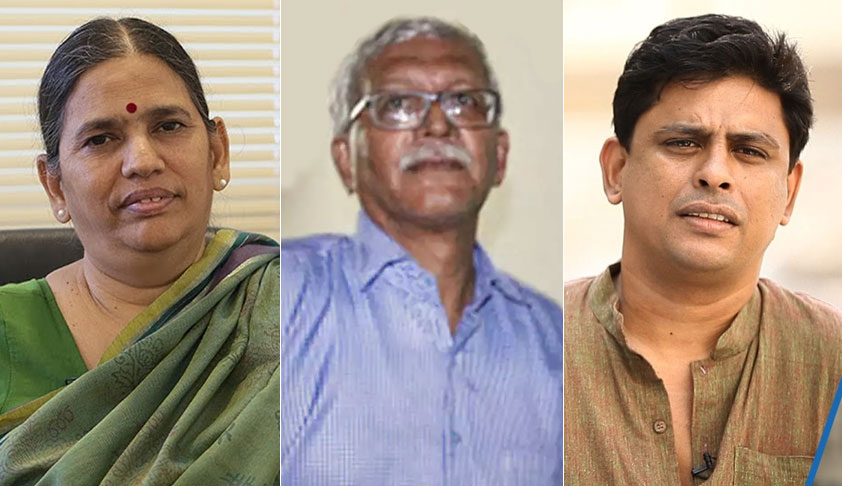 A Pune court on Saturday remanded rights activists Sudha Bharadwaj, Vernon Gonsalves and Arun Ferreira, accused of having Maoist links, in police custody till November 6.Bharadwaj, under house arrest in Faridabad, was taken into custody by police this morning and brought to Pune.Gonsalves and Ferreira had been taken into custody by the Pune Police Friday evening after the court rejected the...

Bharadwaj, under house arrest in Faridabad, was taken into custody by police this morning and brought to Pune.

Gonsalves and Ferreira had been taken into custody by the Pune Police Friday evening after the court rejected the bail applications of all three, observing that the material collected by police, on the face of it, shows their alleged links with Maoists.

District and Sessions Judge K D Vadane sent Gonsalves and Ferreira to police custody till November 6 after they were produced in the morning. The judge remanded Bharadwaj in police custody for the same period later in the day.

Public prosecutor Ujjwala Pawar argued that as all the accused were under house arrest (according to the Supreme Court's directions), they could not be interrogated, so their police cusody was needed.

Seeking their police custody for 14 days, Pawar said the preliminary investigation has revealed that the three had links with the banned CPI (Maoist) and were involved in recruitment as well as raising funds for Maoist activities.

They were involved in "larger conspiracy to threaten the democratic set-up of the nation", Pawar told the court.

The Pune Police arrested Ferreira, Gonsalves, Bharadwaj and two others -- Telugu poet Varavara Rao and activist Gautam Navlakha -- in August this year in connection with the probe into violence in Koregaon Bhima in Pune on January 1 this year.

Gonsalves and Ferreira were brought to Pune from their residences in Mumbai on Friday after the bail pleas were rejected by the court. Their four-week period of house arrest also ended on Friday.

Seeking Bharadwaj's police custody, prosecutor Pawar claimed she was a key office-bearer of the Indian Association of People's Lawyers, "a frontal organisation of CPI (Maoist)".

Bharadwaj had the responsibility to recruit students from institutes such as the Jawaharlal Nehru University (JNU) and the Tata Institute of Social Sciences, she said.

"After the recruitment, the students were sent to the interior parts which are called guerrilla zone," said Pawar.

Documents seized from Bharadwaj revealed that she guided Maoists on tactics, and she had asked Maoist leaders to follow the tactics of Kashmiri separatists to disturb law and order situation in other parts of the country, said Pawar.

Bharadwaj filed an application in the court Saturday in which she said she suffered from high blood sugar and some other health issues, and she should be provided the same facilities in jail which the government had "promised" to fugitive businessman Vijay Mallya.

"The applicant must be provided with condition of incarceration, bathing and toilet facilities which are on par with those promised to be provided to Mr Vijay Mallya by the state and central government," the application said.

The court ordered that the required medical facilities be provided to her.

Opposing the police custody, defence lawyer Rahul Deshmukh, who represented Gonsalves, argued the police in remand report have not mentioned that they need to recover any material from the accused. The material seized earlier is already in their possession for nearly two months, he said, adding "so there is no need for police custody".

Citing a CrPC section, he argued that the house arrest is nothing but a "judicial custody".

"While seeking the police custody of the accused, who are already in judicial custody, the prosecution needs to submit an affidavit... No affidavit was submitted, so there is no need to give police custody," Deshmukh said.

Advocate Siddharth Patil, representing Ferreira, argued the period of the house arrest specified by the SC was valid till midnight of October 26.