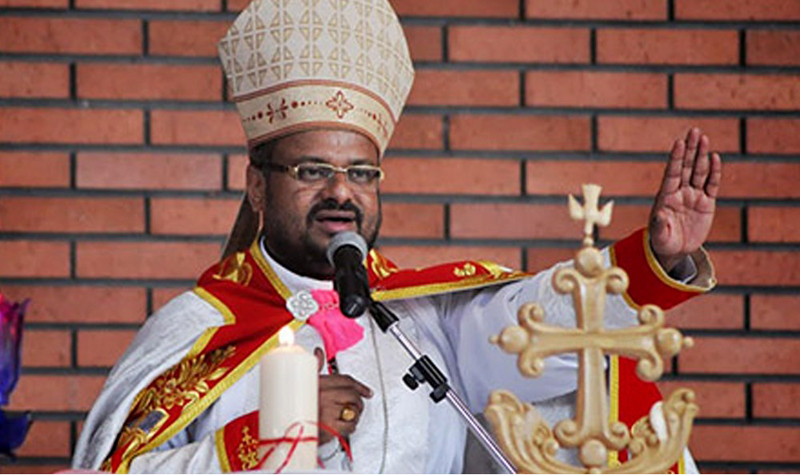 The court said that it was premature to consider plea for CBI investigation.Today, the High Court of Kerala considered three petitions seeking proper investigation of criminal case against Franco Mulakkal, Bishop of Jalandhar Diocese of Catholic Church, who stands accused of raping a nun.The Division Bench of Chief Justice Hrishikesh Roy and Justice AK Jayasankaran Nambiar perused the...

The court said that it was premature to consider plea for CBI investigation.

The Division Bench of Chief Justice Hrishikesh Roy and Justice AK Jayasankaran Nambiar perused the progress report of investigation, which was produced in a sealed cover by the prosecution. The Director General of Prosecutions Manjeri Sreedharan Nair submitted that meticulous investigation spanning over seven districts in Kerala, and five States was under progress, and statements of 81 witnesses have been taken. It was submitted that there were contradictions in the witness statements, and the police was in the process of cross-checking them. It was also submitted that notice under Section 41A of CrPC has been served on Franco Mulakkal to appear before police on September 19 for interrogation. The DGP submitted that decision regarding his arrest can be taken only after his interrogation and verification of contradictions in the evidence.

The Court recorded prima facie satisfaction of the investigation on the basis of progress report submitted by Dy.SP Vaikom, the investigating officer, and held :

"...we are of the prima facie view that the investigation is being conducted in a fair and professional manner, and at this stage, it would be inappropriate for this Court, to issue any specific direction on the conduct of the investigation"

During hearing Adv.Sandhya Raju, the counsel for Kerala Catholic Reformation Movement, submitted that the non-arrest of Bishop, even after more than 70 days of nun’s complaint, was unusual, giving rise to strong suspicion that the investigation had been compromised. She added that in ordinary course, an accused in such a case would have been arrested long ago. At this, the Court stated that general practice of immediate arrest may not be applicable in the instant case, as the alleged incidents occurred almost two years ago. “Arrest is a matter of discretion of police”, the bench observed. The bench added that it was only concerned with whether investigation is going on fairly, and that it cannot compel police to carry out investigation in a particular manner.

Adv. Joseph Rony, the counsel for George Vattakulam, voiced the apprehension that witnesses were being intimidated and induced. He also highlighted that no witness protection scheme has been implemented in the state, despite SC directions in Manu Sharma case. Responding to this, the DGP submitted that all steps were taken to afford protection to the victim and the witnesses from threats and inducements. Round-the-clock protection is given to the convent where the victim and witnesses are staying, the DGP assured.

The Court said that it was taking care of the situation, and will monitor the case to ensure that victim and witnesses are not intimidated or induced. The police should take care to avoid inducements and threats by persons sitting at the top of the hierarchy, the bench orally observed.

Adv. C.Rajendran, the counsel for the petitioner seeking handing over investigation to CBI, submitted that the accused ought to have been subjected to medical examination, as per Section 53A of Code of Criminal Procedure. The court expressed that the question of such examination will arise only after arrest, as evident from the language of Section 53A. The court said that it was premature to consider plea for CBI investigation.

Taking note of the fact that the Bishop has been summoned on September 19, the Court adjourned the matter to September 24. The police have to apprise the Court of progress of investigation. It will be open to the victim or the witnesses to approach the Court in the event of any threat, intimidation or inducement.

In early August, one PIL was filed seeking arrest of the Bishop. That case was closed by the High Court on August 13, noting that no directions were necessary as investigation was progressing on right track.