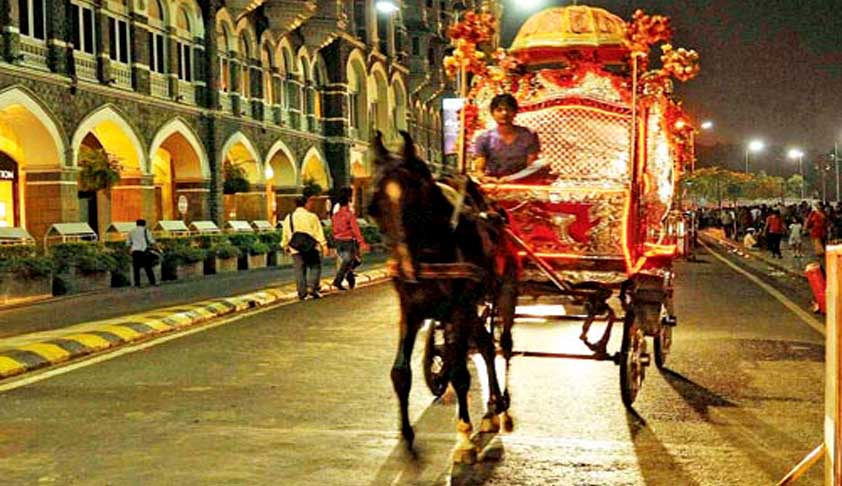 Bombay High Court declares Victorias or horse-drawn carriages completely illegal and instructed the government to effect a ban on them within a year from the Judgment. The Court speaking through Justice A S Oka and Justice A K Menon said that “We hold that the use of horse-driven carriages / Victorias in the city of Bombay for joy rides is completely illegal. We direct the state government...

Bombay High Court declares Victorias or horse-drawn carriages completely illegal and instructed the government to effect a ban on them within a year from the Judgment. The Court speaking through Justice A S Oka and Justice A K Menon said that “We hold that the use of horse-driven carriages / Victorias in the city of Bombay for joy rides is completely illegal. We direct the state government to come out with a scheme for rehabilitation of the families of those who are associated with the business of running carriages driven by horses in the city of Bombay for joyrides”

Victoria which is primarily meant for joyride, according to the Court, does not fall in the category of "Public Conveyance" under the Bombay Public Act 1920. The petitioners pointed out the 44 carriages and 10 Stable with 158 Horses have been operating without obtaining a license. Moreover there is no provision in Bombay Public Conveyance Act, 1920 to grant licenses for horses/ponies used for joy rides.

The petitioners who were supported by People for Ethical Treatment of Animals (PETA) had also alleged cruel treatment of horses. But the respondents maintained that the breeds used by them are adapted to traffic conditions and concrete roads in Bombay. The Court observed that “There is material on record in the form of opinion expressed by a large number of experts after visiting the stables that the same are in unhygienic conditions and the same lack the basic facilities for animal housing”. It was also suggested by the court that “If any animal welfare organization comes forward to take care of the horses, the state government shall be free to consider the said option.”

It was made clear in the Submissions by the respondents that approximately 700 persons are directly associated with the business as owners, attendants, drivers and stable boys. It is alleged that the livelihood of appropriately 700 families is depending upon the business relating to horses in the City of Bombay. An allegation was also raised against one of the petitioners who is into construction business has vested interest in the Ambedkar Nagar Slum Redevelopment Scheme where stables are maintained by the horse owners.

Whereas an affidavit filed by Shri Dilip Vishnu Raut, Police Inspector, in charge of Public Land Conveyance Licence Branch at Bandra East, Mumbai states that operation of the victorias in the City is now restricted to only few areas. It is stated that the motor vehicles in Mumbai have been increased by 203% between 1991 to 2001. He has stated that the horse carriages in the City of Mumbai are hazardous to both people and animals. It is stated that the use of horse carriages in the city creates tremendous traffic congestion.

The Court while disposing off the petition by ordering to close down all the stables in the city, directed the State Government to formulate the Schemes to rehabilitation of the affected group and place it on court records on or before 31st December 2015.

Dynamic Injunctions In India
Latest News
+ More
1We Have To Address The Issue Of Freedom Of Speech Together As A Society: Justice Ravindra Bhat
2Bombay High Court Weekly Round-Up: May 9 To May 15, 2022
3Commission Paid To Persons Who Are Not Beneficial To Business Of Assessee Is Taxable : Orissa High Court
4Arbitration Cases Weekly Round-Up: 8th May to 14th May, 2022
5Gujarat High Court Weekly Round Up: May 9 To May 15, 2022
6Tax Cases Weekly Round-Up: 8 May To 14 May, 2022
7Allahabad High Court Weekly Round Up: May 9 To May 15, 2022
8Gujarat High Court Sets Aside Injunction Passed By State Waqf Tribunal On Construction Of Railway Tracks Near Dargah
लाइव लॉ हिंदी
+ More
International
+ More
1Abortion Laws In The US And Other Countries
2Leaked Draft Judgment Of US Supreme Court Indicates Overruling Of Roe v.Wade Abortion Rights Decision
3The Indian Connection With Pak Decision To Live-Stream Court Proceedings
4Russian Suspension At The Human Rights Council: Band-Aid On A Bullet Wound?
Environment
+ More
1Supreme Court Permits E-Rickshaws In Matheran As Pilot Project To Check Feasibility
2In Case Of Doubt, Protection Of Environment Would've Precedence Over Economic Interest: SC Revokes Approval For Doubling Castlerock to Kulem Railway Line
3NGT Bars Auroville Foundation From Township Construction Till Environmental Clearance Is Obtained
4Ghazipur Landfill Fire: NGT Says Dump Sites In Cities Are Like 'Time Bombs', Constitutes Joint Committee Headed By Former Delhi High Court Judge