Book Launch: Hope in a Challenged Democracy – An Indian Narrative 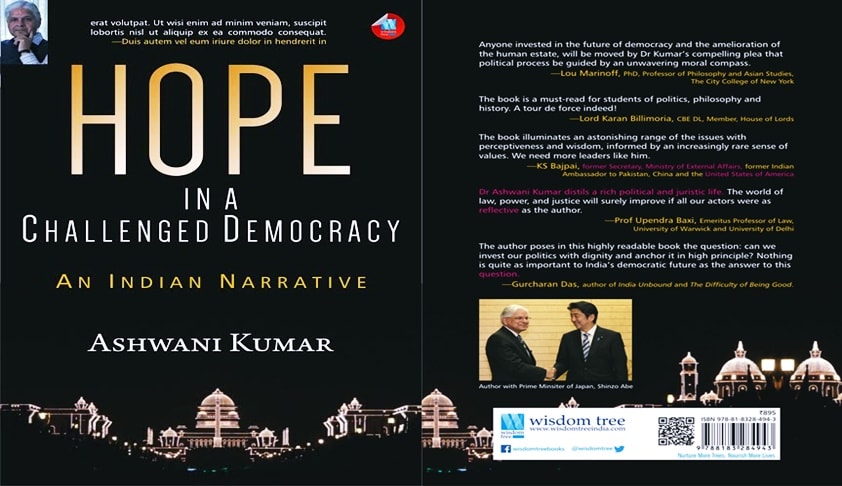 Subscription starts from
₹ 599+GST
(For 6 Months)
View Plans
Premium account gives you:
Subscribe Now
Already a subscriber?
Login
Eminent lawyer, author and veteran parliamentarian, Dr Ashwani Kumar's second book Hope in a Challenged Democracy – An Indian Narrative, will be launched  in New Delhi on April 10, 2017 by Dr. Manmohan Singh.The function will be presided over by Shri Hamid Ansari, Vice President of India as the Chief Guest. Shri M. N. Venkatachaliah, former Chief Justice of India, will be the Special Guest. The event is likely to be attended by eminent personalities from different walks of life. By invitation only.

Dr Kumar was the member of the Rajya Sabha for fourteen consecutive years till his retirement in April 2016. During this time, he held various ministerial positions including Minister for Law and Justice, Special Envoy of PM Manmohan Singh to Japan (2013) and chaired several important parliamentary committees. Dr Kumar represented the Indian government at the highest forums of diplomacy including in the United Nations General Assembly (UNGA) and the World Economic Forum. He is a senior advocate of the Supreme Court, a former Additional Solicitor General, widely recognized for his eloquence as a spokesperson of the Congress party and for the intellectual depth of his writings and parliamentary interventions. He was honored with Honoris Causa by Punjab University in 2005.

The book goes beyond semantics and critically analyses issues of fundamental importance in the framework of the dignitarian goals of the republic, the role of a ‘living Constitution’, the necessity of equilibrium between executive, legislature and judiciary, the role of media, importance of equitable growth, a responsive justice system and a rising India’s engagement with the world. It provides a statesman’s perspective on addressing challenges and optimizing responses with a view to transforming our democracy as a true reflection of the collective conscience of the nation.

The book has been appreciated and endorsed by many legal luminaries and international personalities such as: