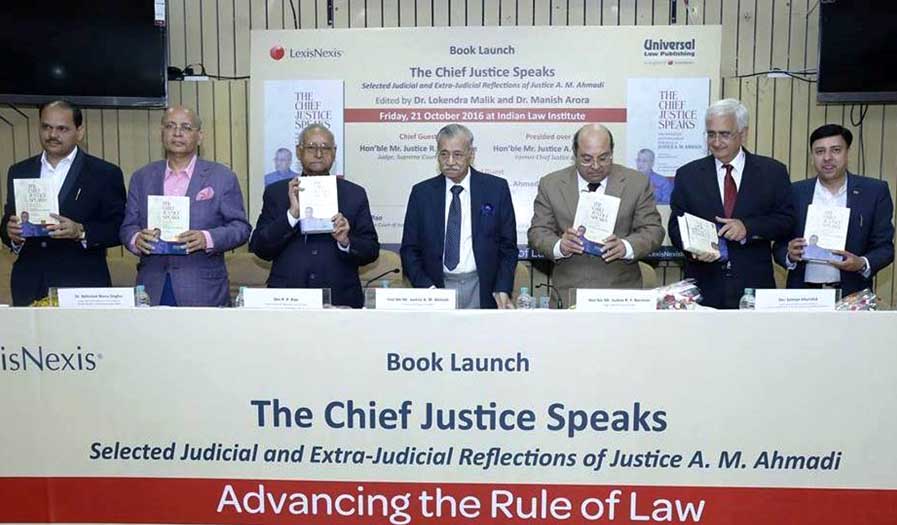 During the occasion, Justice R. F. Nariman congratulated Dr. Lokendra Malik and Dr. Manish Arora for writing a wonderful book and said, “It is very interesting to know that apart from a large number of articles and speeches, the editors have also included extracts from Justice Ahmadi’s judgments, like S. R. Bommai’s case and the Supreme Court Advocates-on-Record Association case. This book includes some very interesting observations made by Justice Ahmadi on reforming the prevalent justice system and also some suggestions offered by him, of which 2-3 are very unique, like setting up an independent authority fully insulated from political interference and having an independent investigation agency again fully insulated from political interference.” He further added, “I exhort all of you to read this book. It is imbued with practical wisdom. I think these two words describe Justice Ahmadi.”

During the occasion, Dr. Abhishek Manu Singhvi said, “The basic overriding characteristic of Justice Ahmadi is the rich and sheer humongous diversity of his experience, which I think animates his life. His knowledge of procedure, knowledge of nitty-gritty, knowledge of real life, grassroots and how the common man interacts and where the interaction fails in the judicial system is remarkable. Justice Ahmadi single-handedly, to a large extent, is responsible for the shinning glory of a fundamental pillar of democracy we have in the India today - the Election Commission of India.”He added, “The 80s-90s were some of the most difficult times in the judiciary and difficult times for Justice Ahmadi, but the way in which he carried on with sobriety, balance and dignity is the testimony to the calibre of the man and the fibre of the man, and therefore, I salute him for that.”

Overwhelmed with the exceptional praise from the dignitaries present, Justice Ahmadi said, “You would be able to read me through this book. It speaks for itself. Whatever I have to say is covered in the judgement and speeches extracted in the book.”

Senior Advocate Mr. PP Rao seeing the audience remarked that the presence of such distinguished audience is the testimony of the importance of the function and how much respect Justice Ahmadi commands. He said, “The book contains his views on various range of topics, not only democracy, human rights, and right on minorities but also social activism, appointment of judges and what not. There are several aspects I have gone through and I would recommend this book to all.”

Talking about Justice Ahmadi and the book, Mr. Salman Khurshid said, “The volume containing selected judicial pronouncements and extra-judicial writings of the former Chief Justice of India Mr. A. M. Ahmadi is an admirable initiative that will add great value to the reservoir of the legal literature of the country. The issues addressed in this volume are highly relevant, contemporary and need a serious consideration. In the present context, Justice Ahmadi’s legacy will inspire succeeding generations to contribute their best to the cause of justice. ” He also added, “The book is both a tribute to Justice Ahmadi’s contribution within and outside the courts for developing constitutional jurisprudence dynamic enough to sustain the world’s largest democracy and an independent judiciary based on the rule of law.”

Mr. Vikesh Dhyani, Director, Marketing, Customer Discovery & Innovation, LexisNexis India-South Asia, said, “Chief Justice Ahmadi is well-known for his scholastic personality and compassionate nature. The book contains a number of his judgments and extra-judicial writings. The book also contains a brief biographical sketch of Justice Ahmadi and has covered many aspects pertaining to law and governance in his judgments and extra-judicial writings that makes it an interesting read for lawyers, judges, academic and all those who look forward to know about the judicial system of the country.”