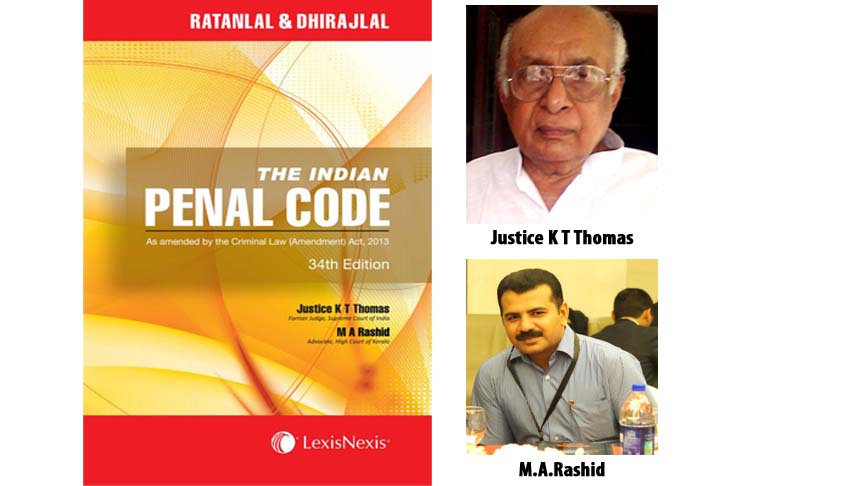 Title : THE INDIAN PENAL CODE AS AMENDED BY THE CRIMINAL LAW (AMENDMENT) ACT, 2013

Indian Penal Code, 1860 (hereinafter “The Code”) is a land mark in criminal jurisprudence. It was the first code of criminal law in common law jurisdiction. The Code was largely the manifestation of the work done by the Indian Law Commission, 1834 headed by Lord Thomas Babington Macaulay. The Code was built around the principles of uniformity, diversity, comprehensibility, precision and certainty and was intended to be the singular standard of justice aimed to enhance the rule law.

Legal commentators are a part of great lineage of pathfinders whose invaluable contribution played a significant role in the evolution and development of law. Commentaries attempt to analytically or descriptively expound law (statute/code or branch of law) by delving into a deep and broad discussion into basic principles of law taking aid of letter of law, case laws. Through that the commentator comments what is law and what should be the law. In its bare form Indian Penal Code was devoid of the very principles it was built around, viz., certainty, uniformity, comprehensibility and precision. This ignominy was removed by two authors- Ratanlal and Dhirajlal who heralded a new dawn in the Indian legal literature.

Into its 118th year, Ratanlal& Dhirajlal, The Indian Penal Code is the oldest commentary on Indian Penal Code. The fact that this book is into its 34th edition (herein after ‘the current edition) is a testimony of its biblical value. This edition has been brought forth by two authors who have affixed their indelible imprint in their respective fields. Honourable Mr. Justice K.T. Thomas is a doyen in the legal echelons. Amongst the pantheons in the temple of justice, His Lordship has captained and stewarded several landmark cases in Constitutional law and Criminal law. Adv. M.A. Rashid is an erudite exuberant and an enterprising author who has rendered pioneering contribution to legal literature.

This book can be divided into three parts- ‘the general introduction’, ‘the text’, which has commentary on Indian Penal Code and ‘the summary’. ‘General Introduction’ provides a brief insight into the evolution of criminal law and development of modern criminal law in India. ‘Summary’ also gives inputs pertaining to development of Indian Penal Code besides a cursory glance about entire commentary.

Structurally the commentary is linear. Comments are provided after every section. Comments are augmented by a comparative analysis of various other statutes and international instruments. Typical example is found on the comments to sections 2 and 4 of the Code.  In Enrica Lexie case, the Supreme Court directed the Central government to set up a special court in accordance with the provisions of the Maritime Zones Act, 1976, Indian Penal Code, the Code of Criminal Procedure.  The Apex Court also underlined the fact that ‘sovereignty over the maritime zones can be asserted by the Parliament’. In depth coverage of various issues pertaining to admiralty jurisdiction including piracy, SUA Act, UNCLOS, 1982 etc is worth appreciating. Readers can obtain a comprehensive output on this aspect through this book.

Copious and generous amount of case laws are analytically and descriptively discussed in the current edition. Up to date case laws enrich this edition. Another notable feature of this edition is tabular presentation of guidelines laid down by the courts in multitude of cases.

Criminal dereliction of duty by public servants who are duty bound under law is not unheard in India. Increasing crimes against women in India is a matter of grave concern. Even greater concern is the callousness of the law enforcement agencies to abide by the letter of law. The obnoxious laxity with which police handled the Delhi gang rape case (Nirbhaya case) led to obloquy of police. To address this, Criminal Law Amendment Act, 2013 inserted Ss. 166A and 166B. In Lalitha Kumari v. Government of Uttar Pradesh, constitutional bench of the Supreme Court has issued guidelines for registration of FIR in certain offences deserves mention. These guidelines will truly augment these provisions and will act as a pathfinder to public servants in performing their legal duty. This edition has highlighted lalitha kumari’s case in a tabular format.

Society built around ‘rule of law’ cherishes human life. Henceforth, as a corollary, it prohibits killing of any human being by another. Homicide, as was foretold is considered to be one of the heinous of all offences. Based on the culpability, Penal Code distinguishes between lawful homicides and unlawful homicides. Lawful homicides are those falling within ‘General Exceptions’ laid down in Chapter IV of the Code. Unlawful homicides covered under the Indian Penal Code include culpable homicide not amounting to murder (S. 299); murder (S. 300), rash and negligent homicide (S. 304A) and suicide (Ss. 305, 306). Among them culpable homicide (S. 299) and murder (S. 300) are considered most pivotal. The academic distinction between ‘murder’ and ‘culpable homicide not amounting to murder’ has vexed the courts for more than a century. Their difference is hedged on the subtle difference between interpretation and application of two words- ‘intention’ and ‘knowledge’. This distinction was explained in R v. Govinda   and in State of Andhra Pradesh v. Punnayya. The authors authoritatively assert that the dictum laid down in Punnayya’s case is the law of the land by virtue of Article 141 of the Constitution of India, besides laying down the distinction in a tabular format.

Forensic dilemma of awarding death sentence is compounded by the prevalence of alternative punishments and apprehension of judicial discretion in awarding death sentence.  Sentencing depends upon facts and circumstances in a particular case. In Jaganmohan Singh v. State of Uttar Pradesh, Supreme Court while upholding constitutionality of death penalty, held that discretion in the matter of sentencing, especially while choosing between two alternative sentences under s. 302 IPC has to be exercised by the judge judicially, after balancing all the aggravating and mitigating circumstances connected with the particular crime under inquiry.

This edition has analytically assessed evolution of sentencing policy in India. First phase focused on crime instead of criminal. Second phase commenced with a shift in focus from the crime to crime and criminal. Thus in Bachan Singh v. State of Punjab, Supreme Court observed that for persons convicted of murder, life imprisonment is the rule and death sentence is exception. The Constitution Bench further held that death sentence ought to be given only in the rarest of rare cases where the option of awarding sentence of life imprisonment is unquestionably foreclosed. Rarest of rare test (RR test) received further impetus when Apex Court in Machhi Singh v. State of Rajasthan, considered the factors for determining rarest of rare cases. However, the application of ‘RR test’ was not followed uniformly. The bone of contention herein was the inconsistent application of ‘balance-sheet theory’ on a case-to-case basis to remove the vice of arbitration from capital sentencing system.  Apprehension was raised in some cases that the real intention behind Bachan Singh’s decision to bring in ‘principled sentencing’ has been hijacked by a ‘judge-centric sentencing’.  In Mohinder Singh v. State of Punjab, Supreme Court held that, ‘a conclusion as to the ‘rarest of rare aspect with respect to a matter shall entail identification of aggravating and mitigating circumstances relating both to the crime and the criminal and the expression ‘special reasons’ obviously means (exceptional reasons) founded on the exceptionally grave circumstances to the particular case relating to the crime as well as the criminal. Thus it was unambiguously declared that court should award death sentence only in such situations, due to constitutional compulsions, reflected by the will of the people and not the will of the judges.

Authors have to be credited for accommodating certain case laws which have assumed contemporary relevance. They are- a) curb on appropriate government’s power to grant remissions ; b) commutation of death sentence on account of delay in execution; c) acceptance of passive euthanasia under exceptional circumstances under strict monitoring of the Court ; d) upholding the constitutional validity of s. 377 IPC and criminalising unnatural offences (LGBT) .

One of the paramount thoughts behind bringing forth this edition was to highlight the drastic changes made to the Code in the light of growing incidents of crimes against women in India. Thorough documentation of all provisions inserted by virtue of Criminal Law Amendment Act, 2013 is exemplary. Exegesis of these provisions enriched by comments of case laws can be expected in the subsequent editions.

This book also sets a bench mark for affordability. At 650/- INR (paperback) this book is easily within reach of the entire spectrum of legal community. This book exhorts others to follow its path. To conclude, this book is a sumptuous symphony of a rich sonata of updated case laws and legal provisions, incisive analysis, descriptive tabular representation which is uniformly presented, precisely worded, comprehensively discussed legal commentary.