A Critical Comment On The Book Sixteen Stormy Days 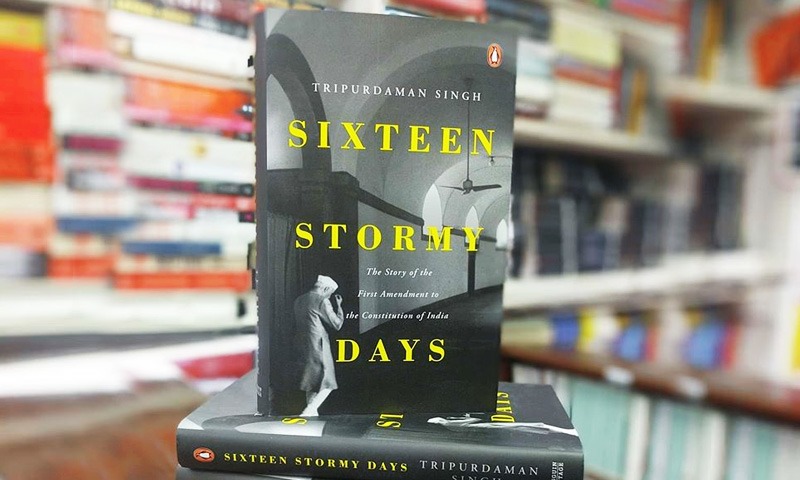 The changes brought in by the first amendment of the Constitution of India is worth examining before venturing to analyse the views presented by the author. Remarkably, the amendments were debated by the ad hoc parliament before the first general election being taken place in independent India. The Parliament was lacking the two houses as envisaged by the constitution at that time. The Constitution (First Amendment) Act, 1951 brought changes to three Articles in part III of the Constitution of India. Article 15 prohibits the state from discriminating citizens on grounds of religion, race, caste, sex and place of birth. The amendment added a fourth clause to Article 15 enabling the state to make special provisions for disadvantaged classes notwithstanding the original Article 15 and Article 29(2). It proffered changes to Article 19(2) and Article 19(6) imposing more restrictions on free speech and on freedom of trade and profession. The amendment incorporated two new provisions namely, Article 31(A) and 31(B) in the Constitution. While Article 31(A) facilitates acquisition of private property by the government, Article 31(B) brought in ninth schedule to the constitution to veil legislations from judicial scrutiny.

The first amendment was subjected to many criticisms. Prolific literature was contributed to the subject. Deliberations were made on the necessity, appropriacy and the haste in bringing the amendment as well as on its reverberations. Creation of the Ninth Schedule and veiling the statutes from constitutional challenges were considered as anathema to the constitution. Regarding amendment to Article 15, two views were respectively held by pro and anti-reservationists. Amendment to Article 19(2) also created divergent opinions. While the propertied class criticized amendment to Article 31(A), the socialists supported the move towards attaining social parity. Literature shows that opinions were divergent in the case of changes to different Articles. They confined the discussion to legal aspects of the subject while examining the wisdom of the amendment. Intention or motive of the amendment was not their theme.

The book, quite the contrary, claims to unravel disingenuous motives, that triggered the amendment. This forms the theme of the book. It sheds some light on certain unknown aspects of the subject and unveils new information. The work is rich in style, language and articulation. It is commendable for the coherence of ideas and is academically worth reading. Still, the book entails a different note as regards its theme. The author makes some propositions in pursuance of his theme. Nonetheless he could not succeed in establishing such propositions with acceptable evidence.

The book is expected to scrutinize the rationale of the amendments and its legal repercussions. Lack of proper judgment on the part of the government to weigh various options than resorting to constitutional amendment can be the core theme of the book. But, in the course of exploration, the author seems to have shifted focus to its political fallout. Thereafter, he was making more political statements than legal. A deliberate attempt is seen to have made to present the first Prime Minister of India, Jawaharlal Nehru in poor light. The political statements, that he attempts to make can be summarized as follows.

Nothing prevents the author from making an enquiry in to the political aspects of the amendment and to make his findings on them. But such an enquiry should conform to standard procedure while the findings should base reliable materials. However, the author trusts on weak sources for making the aforementioned propositions. His sources can broadly be classified in to two, namely press reports and other published works. He mainly uses the source of press reports for drawing most of the political conclusions. He extensively relies on the news items reported in two newspapers, namely, 'The Times of India' and 'The Hindustan Times'. The other sources cited by the author are collections of Nehru's letters and correspondences, Parliamentary debates and some other published works. The extracted passages from the latter sources do not support the views articulated by the author. He is appeared to have drawn conclusions and made the statements relying on his inclinations rather than on source materials. This very tendency of the author is conspicuous throughout the book.

As aforementioned, the author heavily relies on the reports of two selected newspapers, for making controversial political statements, which are hither to alien to Indian political history. A scrutiny of various parts of the book would show how such reports analysed the events leading to the first amendment, and how the author indiscriminately accepted them without any critical evaluation. The author depicts the events that led to the amendments as a confrontation between the government and the constitution[1]. He attempts to portray Nehru as a man of radical and authoritarian impulses as against the calm and pragmatic Patel. No or weak sources are relied on to drive in these views. The author quotes with approval the opinion of the Times of India regarding acceptability of the amendment by the people on condition of genuine intention and its accusation of lack of such genuine intention on the part of the government[2]. He shows the credulity to accept this view without critical examination. He looks gullible in accepting the version of the press that the magnitudes of the proposed amendments were misinterpreted to them, without ascertaining from independent sources that if at all the government made any such representation[3]. The attempt to suggest unjust motive on Nehru and government in the context of the Allahabad High Court Judgment upholding UP Zamindari Laws, is ludicrous. The author's apathy in not ascertaining the general public opinion and views of other newspapers while replicating the editorial criticism of the 'Times of India' is glaringly manifested[4]. The declaration that the first amendment marked the first step towards creation of Nehruvian state and the dominance of a personality driven social agenda remains unsubstantiated. The attempt to call the 'heavy rain with thunder on the day of debate as nature's fury' on the amendment is felt inane[5]. The selection of the word 'guillotine was applied' to refer to voting[6] is a further hyperbole. The author, thus, draws many of his conclusions based on untested and selectively read news reports.

Press reports, it is submitted, is a fragile source for political statements. They cannot be equated with public opinion too, for more reasons than one. That, the press makes various statements and reports without verification of their authenticity and reliability, is common knowledge. The press used to claim that it is entitled to make reports without disclosing sources. It often contends that it can rightfully err in making reports. The press is self-proclaimed source of unverified facts. It is possible that many of the newspapers may make interested press reports. Often newspapers write editorials based on their political and ideological leanings. In the present book, the author has shown an apathy to consider, reproduce or even mention the press reports and editorials of other leading newspapers of the time. He has not ventured into verify the source or reliability of the press reports, that he relied on. On the other hand, he accepts all those news reports as gospel truths and thus deem that they represent the public opinion. Resultantly, the propositions of the author suffer from grave weakness to be accepted as historical findings.

The second category of sources of the author is found in some of the published works. He extracts passages from such sources at various parts of the book, before drawing his conclusions. A review of the extracted passages would show that many of the conclusions drawn on them are injudicious. The author unjustifiably calls the government and congress figures as anti-constitutionalists and intolerant like its colonial predecessors[7]. On many occasions, the statements sound deceptive in attributing unintended meaning to the words of Nehru. One such instance is found when he reads fundamental right for the word lacunae mentioned by Nehru. The author tries to present the words of Nehru against judicial interpretation of the Constitution as his antagonism against constitutional democracy[8]. This contradicts the admitted statements of Nehru advising to make reservation conforming to the constitutional principles[9]. While suggesting that the entire congress had turned against the constitution, he contradicts the same by asserting that Nehru was the sole architect of the amendment. These statements are the conspicuous contradictions of the book. Austin's findings that the Ninth Schedule found its source with V.K.T Chari, the Advocate General of Madras is relevant in this context[10]. The author's acknowledgement of the contribution of Alladi Krishnaswamy Iyer to the amendments too underscores this contradiction. Austin notes that Nehru's was cabinet government at its best, where ministers and even bureaucrats expressed views frankly[11]. He gives credit to Nehru for showing respect to the judiciary and for protecting its independence[12]. Austin paraphrases the words of M.C Mahajan C.J, who absolves Nehru of responsibility on Ninth Schedule[13]. A dispassionate analysis of the historical events suggests that the amendment was the collective exercise of the government and the ruling party to overcome their perceived wrong interpretations of the judiciary.

At the beginning of the Constitution, the judiciary was more conservative in interpreting the constitution so that it failed to breathe life to the constitutional texts. Such conservative approach ended up in serving the cause of the elite class while the constitution originally intended the upliftment of the downtrodden. The view that the amendment practically attempted to address this issue can not be dismissed summarily. The later developments such as transformative constitutionalism and living tree concept would more travel along with the amendment brought in than the conservative approach of the judiciary of the time. Further, legislature/executive - judiciary friction is minimal in the present scenario. In this context, the very relevance of the book itself is open to question. Moreover, the authoritative historical facts do not suggest unjust motives either on the part of Nehru or the government in bringing the amendment. The researches conducted on the subject do not suggest such motives behind the amendment. None of them has accused Nehru and his team as anti-constitutionalists nor has impeached them for overturning the constitution. But, interestingly, the author has made a proposition doubting the integrity of the government in general and Nehru in particular. He strikes a surprise by presenting Nehru in poor light as an anti-constitutionalist. Ironically, the extracted sources would not prove this proposition. The interested news reports, chosen for the purpose by him, cannot be reliable and sufficient materials to rewrite the history. Thus, the author fails to prove his propositions. So, the inevitable conclusion at the end of the day is that the propositions and conclusions in the book are based on personal inclinations rather than on reliable sources.

(Author is a practising Lawyer at Kerala High Court)