'Black Warrant: Confessions Of A Tihar Jailer' - A Gripping Account Of Prison Life 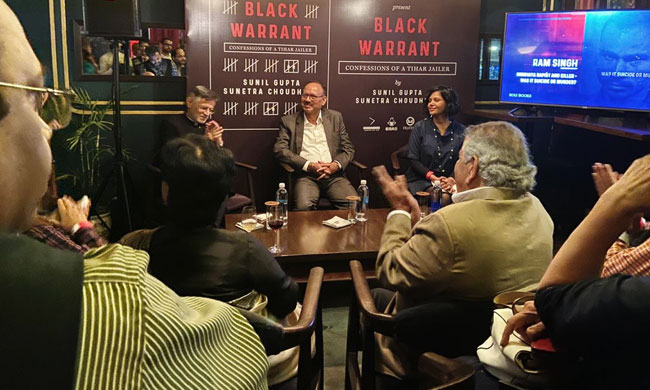 One word that can be used to describe "Black Warrant: Confessions of a Tihar Jail" by Sunil Gupta and Sunetra Choudhury is – gripping. An absolute page-turner, the non-fiction novel recounts the experiences of Mr. Sunil Gupta who spent 35 years as a jailer at the infamous Tihar jail and then as the Legal Advisor to the Director Of Prisons. What struck me right off the bat was...

One word that can be used to describe "Black Warrant: Confessions of a Tihar Jail" by Sunil Gupta and Sunetra Choudhury is – gripping. An absolute page-turner, the non-fiction novel recounts the experiences of Mr. Sunil Gupta who spent 35 years as a jailer at the infamous Tihar jail and then as the Legal Advisor to the Director Of Prisons.

What struck me right off the bat was the simplistic language employed in the book. As journalist and co-author, Sunetra Choudhury stated at the book launch, "It had to be a genuine Sunil Gupta voice. You have to be honest; people will only like your book if you speak the truth." Staying true to her words, Choudhury has managed to make Gupta bare it all for the readers and has avoided any visualization of the prison through rose-colored glasses.

The commendation of her portrayal of Tihar lies in her ability to restrain herself from inculcating her personal opinion in the narrative, no matter how contrary it is to that of Gupta's, and her making way for Gupta to take over the reins. In this regard, Gupta manages to reveal the nitty-gritties of the happenings at Tihar without any moral encumbrances.

We are all aware of how the rich manage to get their way inside the jail, for instance, Subrata Roy of Sahara fame being allotted his own conference room with his lackeys and internet access. The disparities on the economic scale and the consequences of belonging to the lower economic state of society are something that constantly gnaw at Gupta. At the book launch, he stated, "80% of the prisoners have an income which is less than Rs. 8000. Alcohol can reach the rich people inside the jail, but not the poor people. State, if it wants, can put anyone in jail. It tells you how utterly compromised our criminal justice system is. We are compelled to believe what the law enforcement agencies and the society is telling us." In one account, he asks Ram Singh (of Nirbhaya rape case) who later allegedly committed suicide in his cell, "Why did you do it?" Ram Singh responds, "We were drunk. Where we live, people are not good. They drink and they curse and I have also become like that, like an animal."

Gupta also reveals how the prison administration itself is deeply entrenched in the corrupt system that regulates the functioning of the jail. Any attempt to civilize and do away with such practices results in a backlash from your own colleagues. Gupta's complaint to the Delhi Chief Minister, Arvind Kejriwal regarding the special treatment meted out to Subrata Roy resulted in him being implicated in a false case and completely sidelined at the fag end of his career.

Apart from the chronicle on caste discrimination, rampant and blatant corruption, and the role society plays in the shaping of the mentality of a criminal, what sets this book apart is Gupta's account (and Choudhury's portrayal) of the eight hangings that took place during his appointment. It is absolutely raw and gory. During the book launch, Gupta explained what Black Warrant meant – "It is a warrant that is taken out when a hanging has to take place." He talked about the human element of these executions. From the judges who sign the warrant to the jail officials who try to ignore the narrative of a criminal outside the walls of Tihar, everyone ends up feeling terrible during an execution. However, Gupta admits to his perverse excitement at witnessing an execution as well. One can say that Black Warrant has not minced any words.


Gupta talks about how everyone is conditioned to hate the prisoners. At the book launch, Choudhury conveyed her difficulty in accepting Gupta's perspective on the events that transpired. For instance, the case of Manu Sharma (Jessica Lal murder case) was touted to be the toughest part for her. "I could not take his narrative on Manu Sharma. And, that is the toughest part of this book. It is not my voice. Because for him, Manu Sharma is a good guy. But, he was able to convey to me how terrible it is to be surrounded by so much of negativity." Gupta's rationale was that Manu Sharma was symptomatic of the corruption and discrimination that pervades Tihar. A jailer's sole purpose was to exploit the goodness of the person.


Gupta's accounts on Afzal Guru and Maqbool Butt's executions are fantastic. He not only displays the humane side of the two terrorists, but also manages to jolt the reader's conscience by displaying that a sinner can be separated from his sins because of the inherent defect that exists in society. His belief that reform and rehabilitation are the primary goals of incarceration is the underlying theme of the book.On being asked at the book launch about his stand on the death penalty debate, Gupta comments, "If I go by my heart, I do not think in a civilized society, we should have a death penalty. This may fit in the system of Saudi Arabia. It does not fit in our system. We are God-fearing. When someone is in the jail, he might not have heard the name of God when he was outside, but inside, they become super spiritual. There are a lot of temples constructed by prisoners inside. When we can't give life to someone, we have no right to take away the same life." He also comments on how the entry of NGO's in prison functioning has managed to change a lot in 25 years; when prisoners see others trying to help them, develop a bondage with outside society and that's when reformation takes place. Reform activities are constantly carried out. Justice Krishna Iyer's judgements on prison reforms has always been a guiding light for the management of Tihar.


In conclusion, "Black Warrant" is a must-read for anyone willing to comprehend how Tihar jail is a microcosm of the society we all live in. It is no different from the outside world and every paragraph is a hair-raiser as it confirms our suspicions about the perverted operations in Tihar. Sunil Gupta's anecdotes and Sunetra Choudhury's rendition of them ensures that the non-fiction earns the title of an insightful page-turner. I do sincerely hope that we all collectively heed Gupta's warnings and try to incorporate his solutions in the proper restitution of prisoners.