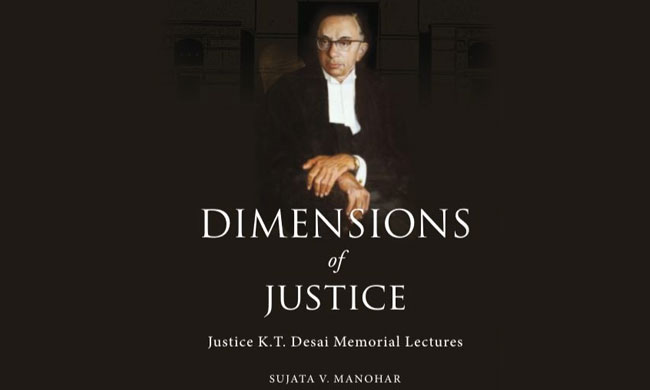 There is something touching about a daughter putting together a volume of essays in memory of her father, even if (some would say, particularly when) the offering is made posthumously. This collection of speeches, delivered by an eclectic range of personalities – including practising and academic lawyers, serving and retired judges and a political scientist – between 2004 and 2017,...

There is something touching about a daughter putting together a volume of essays in memory of her father, even if (some would say, particularly when) the offering is made posthumously. This collection of speeches, delivered by an eclectic range of personalities – including practising and academic lawyers, serving and retired judges and a political scientist – between 2004 and 2017, stands testimony to the affection and regard in which Sujata Manohar, a member of the Bombay Bar (who went on to become a judge of the Supreme Court of India), held her late father, Kantilal Thakordas Desai. Popularly known as 'K.T.' in legal circles, Desai was himself a prominent lawyer and judge of the Bombay High Court in the last century.

The twelve substantive essays in the book span a wide range of subjects from human rights, human duties, judiciary and the media, the rule of law, national unity, judicial overreach, criminal law, judicial dissents, to the state of democracy in contemporary India. As can be expected, they represent a mixed bag, with the contributions varying in length, style, coherence and quality. An introductory chapter, in which Sujata Manohar reminisces affectionately about her father, lends a personal touch to the collection (she graciously acknowledges in a preface the contribution that her sister, Sadhana, a gynaecologist, has made to the founding of the lecture series on which the book is based).

The volume starts with a collation of speeches made by seven legal luminaries at a symposium organised in 2004 by the two sisters in the historic central hall of the Bombay High Court to inaugurate the lecture series. These speeches, more demotic in tone than the essays which follow, offer personal reflections on Justice Desai and of the judiciary in his time. To many, they will evoke memories of an era which seems generations away and whose ethos has long gone out of fashion.

As for the essays themselves, it is difficult to discern an overarching theme or a common thread to them (except possibly that all the topics addressed fall predominantly within the ambit of 'public law' and present a worldview that can broadly be called 'liberal' in the sense in which that term is now commonly understood – brave would be the organiser of a lecture series today who invites speakers of a conservative disposition!).

Some of the contributions may be criticised for traversing well-trodden ground with nary a new idea or novel insight (an example of this is the essay on 'Actualising Human Rights' by the former Chief Justice of India, J.S. Verma, who does little more than regurgitate platitudes and recite facts which have been the subject of numerous articles and speeches over the years). A different type of criticism may be levelled against one or two other contributions: the essay on 'Judiciary and the Media' by the former Supreme Court judge Ruma Pal, for example, focuses on a subject which is both highly topical and rich with potential for meaningful comment (and, one might add, for development of the law). Unfortunately, the author's treatment of it leaves much to be desired: there is very little internal coherence, and the essay lacks a proper structure, with the result that the reader is left with a feeling of the discussion being all over the place and highly disjointed. A real opportunity lost, especially given that the author is generally recognised as one of India's more erudite legal personalities.

By contrast, the essay on 'Judicial Overreach' by Ashok Desai, a leading member of the Bar, is a model of meticulous organisation and perceptive analysis. It is particularly commendable for what discerning readers (even those who may not agree with the author's views on the subject) will recognise as lightly-worn scholarship. Not for him the flashy displays of knowledge or the self-promotional grandstanding which has, sadly, become commonplace among some Indian lawyers and judges in recent times. Another essay which deserves praise, albeit for different reasons, is the one on 'Fundamental Duties – A Forgotten Chapter of the Constitution' by R.C. Lahoti, a former Chief Justice of India, in which the author draws attention to a much-neglected aspect of the Indian constitution which, he argues, should have been given greater prominence in constitutional discourse than has been the case. Some readers may take the view that this essay could be improved in presentational terms, but that would be a minor quibble.

Questions will always be raised, in the context of collections such as these, about the choice of contributors, and there are no easy answers. Must those invited to deliver memorial lectures necessarily have to have some prior connection or familiarity with the person being memorialised? Although some would argue that they should, practical considerations often trump such decisions. In the case of the present volume, many of the contributors – English judges Lord Woolf of Barnes and Lady Justice (as she then was) Mary Arden; English barrister, Anthony Lester (who was in the news recently in none-too-edifying circumstances); two academics from the United States and the United Kingdom, Paul Dubinsky and Bhikhu Parekh, respectively; and at least a couple of Indian judges, R.C. Lahoti and Santosh Hegde (and maybe two more, J.S. Verma and R.F. Nariman) – are unlikely have had any personal familiarity or contact with Justice Desai, but they were nevertheless invited to speak in his honour and memory.

A more pertinent question in this context might be: if prior acquaintance with the subject of the lecture series is not essential, do those invited to speak have to necessarily be well-known or belong to the circle of the 'great and the good' as seems to be commonly expected? Some would argue that a case can be made, quite respectably, for speakers who, despite not possessing those qualifications, might be able to offer more thoughtful and more substantial contributions than the highly clichéd and anodyne offerings that some of their better-known colleagues often inflict upon their audiences. There are, it would be safe to assume, at least a few such candidates in India (and abroad) whom the organisers of the Desai memorial lectures would do well to seek out for the future.

Arguably, the most striking feature of this book is its eye-catching appearance. In sheer visual terms it stands out for the simple elegance of its cover, the neat layout of the contents, and the attractive font and spacing of its 300-odd pages. But those delights are, sadly, offset by a number of wholly avoidable shortcomings, the most prominent of which are lax editing and a slipshod back index. It remains a source of continuing frustration for intelligent readers that Indian publishers have yet to learn the importance of the back index; and their stubborn refusal to invest the necessary resources towards getting professional help in this area is as baffling as it is inexcusable. Some readers will also cavil at the questionable judgment of those responsible for composing the biographical sketches of the contributors appearing at the beginning of each essay; eye-brows will, in particular, be raised at their penchant for highlighting the parentage of the contributors (which in this day and age would be considered wholly irrelevant in most countries).

[This review is contributed by Dr Venkat Iyer, a barrister and legal academic based in the United Kingdom. He can be reached at [email protected]]