Book Review- Framed As A Terrorist: My 14- Year Struggle to Prove My Innocence 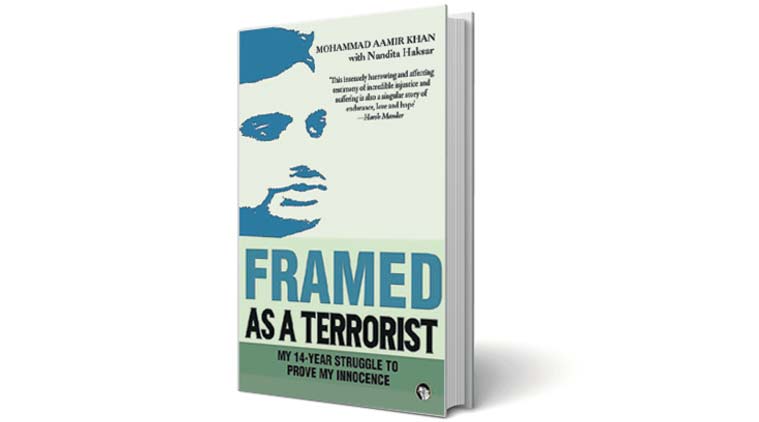 (Content Warning- Few Portions can be disturbing read) "I sat on a chair (in library in jail). I suddenly felt this simple act of sitting on a chair had restored some of my dignity and self respect. After I was released from jail, one of the first things I did was to buy four chairs so that I could sit with dignity ...." From the book[1] 'Framed As A Terrorist: My...

"I sat on a chair (in library in jail). I suddenly felt this simple act of sitting on a chair had restored some of my dignity and self respect. After I was released from jail, one of the first things I did was to buy four chairs so that I could sit with dignity ...."

'Framed As A Terrorist: My 14-Years Struggle to Prove My Innocence' is a heart wrenching book by Mohammad Aamir Khan written with noted human rights activist Nandita Haskar. The book was published in 2016, making this review a little late in day, yet I share this book review with you because 'Framed As A Terrorist....' is not only a personal account of immense struggle, pain and survival, but it is a profound and eye-opening commentary on working of Indian criminal justice system and Indian judiciary.

On a winter night in February 1998, a 19 year old boy named Aamir was arrested (or rather abducted) from the by-lanes of Old Delhi. What followed next, is story of wrongful prosecution, torture and 14-year long lonely legal battle of proving innocence. Tortured and abused in unspeakable ways, Aamir was forced to sign 150 blank pages which were later used to falsely implicate him in more than 15 terror related cases. He and his family with limited means and limited education fought a battle on many fronts for securing justice. Aamir was ultimately found innocent and was awarded compensation of Rupees 5 Lakh for the wrongful prosecution. This book is story of that struggle.

During his 14 year long struggle Aamir was confined in various jails including Tihar Jail, Delhi and Dasna jail, Ghaziabad, UP. Thus the book presents a detailed account of human and psychological story of jails. Jails, according to Aamir are mirrors of society. The prison too operates in hierarchy- the death row prisoners, the high security cell prisoners; the terror accused prisoners, the Naamdaars, the under-trials etc.

Prisons are state subject. Although the colonial Prison Act, 1894 is still the primary legislation on prisons, yet various states have their own prison manuals and their own political background. Thus there are wide differences in working of prisons of different states. Aamir's account of different jails, highlights this difference right from quality of food to protection of human rights of prisoners. While lodged in jail in Uttar Pradesh, he is warned by prison authorities- "Ye delhi nahi h, UP hai."

However, for us as law students, the most important thing Aamir's account of jails does is- putting human face to range of cases we have studied in our law schools on rights of prisoners. His account tells operational reality of these rights. No solitary confinement, prisoners have right to newspaper, magazines and to education, Constitution cannot take hands off approach to prisons, they too are ensured of right to dignity under Constitution- Aamir's story highlights the extreme importance of these case laws in life of a prisoner but at the same time it points out limits of their actual working. Bribes, sexual abuse, and many other challenges still reduce these rights to mere paper tigers, as Aamir's account of prisons would tells us.

Techniques and Plannings of Torture-

Torture is an open secret of police and law enforcement machinery of our country. It has been normalized to such an extent that investigation in any crime is not imagined to be possible without inflicting pain and torture on accused. The book's account of torture is presentation of this normalization.

Roller, Lakshman Jhoola, electric wires, use of bright lights, burning with cigarette butt, blindfolding- these are few torture techniques Aamir shares which were used to break him physically and psychologically. He writes- "No One told anyone what to do, They had it all planned." He highlights the shifts and schedules of torture. His account of torture stands testimony to the fact that torture is an accepted/ normalized practice in working of our system. You cannot develop detailed techniques and shifts/schedules of torture if it is not an accepted practice having sanction of everyone involved.

To get justice one had to have hands made of gold and feet made of iron- Aamir writes on his struggle with criminal justice system. His book highlights range of challenges faced by disadvantaged groups in getting justice- struggle of getting miscellaneous application (for meeting the accused, for providing home cooked food to accused), harassment of family members by police, struggles related to language of court, struggles in understanding complex legal procedures, unaffordable justice at level of appellate or Constitutional courts are only a few to name.

The book is account of failure of each major stakeholder of criminal justice system right from stage of investigation, arrest to trial, leading to wrongful confinement and wrongful prosecution of an individual for 14 years. Delays on the account of lawyers strike, delays by judges, lack of effective legal aid during initial stage of investigation/ statement recording, confessions recorded after custodial torture, use of stock witnesses by police and prosecution to frame innocent individuals, biases of system, limited means of accused- Aamir's story presents contribution of each of these factors in ultimate denial of justice and wrongful prosecution.

We are all products of our socio-economic positions working with our own blinkers and biases. Criminal justice system is no different. The book highlights biases, prejudices of each stakeholder at each level. While in custody of police, he was profiled on his Muslim identity and targeted as such. He was attacked by his fellow prisoner, who called him a 'deshdrohi'. He discusses biases of doctors who were hand in glove with police so as to ensure that 'these people are taught a lesson'. He discusses change in attitude of prison authorities and court towards him post 9/11. His account not only highlights the biases of different stakeholders, it also shows impact of these biases on right to fair trial. The book is not limited to biases faced by Aamir, he highlights the biases against Sikhs at some point and challenges and biases against Kashmiri prisoners.

I recommend this book for us, law students because Aamir's story presents the human consequences of working of our system. It is a cautionary account, that criminal justice system can play havoc with life of an individual. It is not story of Aamir alone. The story of bias, wrongful prosecution and limited means is daily story of our system. There are many Aamirs who have fought lonely and long battles to prove their innocence. (Reference- Adam Bhai Ajemri/ Akshardham bomb blast case).

After reading the book, one would have a better understanding of three questions on wrongful prosecution- who are the people wrongfully targeted? What are institutional reasons for the same? And why are the people who targeted, are the ones who are targeted.

The book is available here- < https://www.amazon.in/Framed-As-Terrorist-Struggle-Innocence-ebook/dp/B01ASFJEFS >