'Holy Cow' : An Extract From The Book 'Republic Of Religion' By Dr. Abhinav Chandrachud 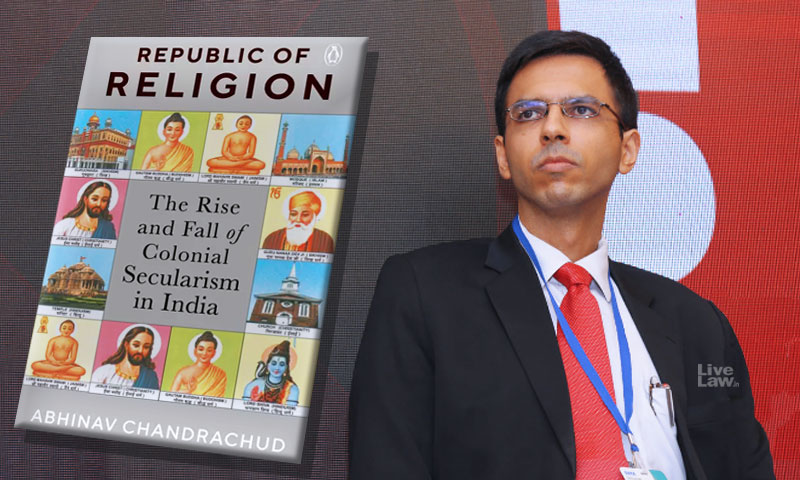 (This is an extract from "Republic of Religion: The Rise and Fall of Colonial Secularism in India" by Dr Abhinav Chandrachud. The extract has been published with the permission of the Author and Publisher.) This chapter examines how independent India became less secular than British India by permitting laws that banned cow slaughter. In British India, Muslims were allowed to...

(This is an extract from "Republic of Religion: The Rise and Fall of Colonial Secularism in India" by Dr Abhinav Chandrachud. The extract has been published with the permission of the Author and Publisher.)

This chapter examines how independent India became less secular than British India by permitting laws that banned cow slaughter. In British India, Muslims were allowed to sacrifice cows during the festival of Bakr Id (the word bakr is Arabic for cow), though Hindus worshipped cows. This changed shortly after India became independent, when laws banning cow slaughter were enacted in many states. This was despite the fact that leaders like Gandhi and Nehru strongly opposed such legislation. Though Gandhi considered it his duty, as a Hindu, to protect cows, he believed that he had to persuade Muslims to voluntarily give up beef. Nehru did not think much of the cow protection movement and once even promised Jinnah that his government would not ban the slaughter of cows. However, after Independence, cow protectionists succeeded in making the ban on cow slaughter a directive principle of state policy by arguing that there were advantages, to India's predominantly agricultural economy, in keeping cows, bulls and bullocks alive so that they may yield milk, work as draught animals, breed and produce manure. These arguments were then used by the Supreme Court to uphold the validity of cow protection laws. Though the economic arguments in favour of cow protection are sometimes tenuous, and though there are obvious religious motivations in favour of the ban on cow slaughter, soft secularism in independent India means that cow protectionists have to mask their religious arguments with economic ones. Indian Muslims can now be prevented from sacrificing cows on the grounds that Islam does not make cow slaughter mandatory, though matters of faith are often not about what is mandatory.

Hindus regard cows to be sacred and consider cow slaughter to be a sin. This principle is of relatively recent vintage in Hinduism and dates not to the Rig Veda (around 1500 BC) but to the Gupta dynasty (around 319 AD). Muslims, by contrast, used to slaughter cows during the festival of Bakr Id. In the colonial period, this was a constant cause of communal tensions. Clashes and rioting took place between Hindus and Muslims because of the slaughter of cows by Muslims. Broadly speaking, there was no blanket prohibition in British India against the slaughter of cows.The East India Company temporarily included a ban on cow slaughter in their treaties with some Indian rulers. Cow slaughter may have been regulated by some municipal governments since the 1920s or earlier. Colonial-era laws placed restrictions on how and where cows could be slaughtered. For instance, a law in 1662 in Bombay said that there could be 'no cow killing in Hindu quarters'. During the colonial period, Muslims were told by the law that they could slaughter cows provided that they did so in a walled enclosure, away from the gaze of Hindus, and discreetly, without much fanfare. Hindus who objected to such sacrifices were considered to be 'hypersensitive'. Enacted in 1860, Section 295 of the Indian Penal Code made it a crime for any person to destroy 'any object held sacred by any class of persons' or defile 'any place of worship', knowing that this would be considered an insult to their religion. This provision was originally intended to prohibit cow slaughter in a sacred place.

In an explanatory note, the framers of the Indian Penal Code wrote that they were moved to draft this provision, among other reasons, because the 'slaughter of a cow in a sacred place at Benares in 1809 caused violent tumult, attended with considerable loss of life'. Two Muslims were then convicted by a magistrate in the United Provinces under Section 295 for slaughtering cows. Setting aside the conviction, however, the Allahabad High Court, in a hugely controversial decision in 1887, held that a cow—a living creature—could not be considered an inanimate object and Section 295 only spoke of the destruction of 'objects'. The judgment of the Allahabad High Court heightened communal tensions between Hindus and Muslims in north India. Indian Muslims thereafter began to carry out cow slaughter in greater numbers, a higher proportion of cows were slaughtered in the 1890s, and prominent Hindus like the Maharaja of Darbhanga lent their support to the cause of cow protection. Around 1882, the Calcutta High Court allowed Muslims to slaughter cows because the 'animals were sacrificed within a walled enclosure, no one could see the process from the outside' and the sacrifices did not result in 'noisy or riotous demonstration[s]' that could disturb the neighbours. Hindus, it was held, could not object to cow slaughter because theirs was 'simply and solely a matter of religious feeling'. Thereafter, several cases were decided by the high courts of British India, especially the Allahabad High Court, in which Muslims were permitted to slaughter cows. In another case decided in 1908, a district magistrate banned the slaughter of cows by Muslims in a village called Behta Gushain in north India. The Allahabad High Court set aside the order. The court began by saying that it would be 'in the highest degree desirable' for 'members of the different religious persuasions' in India to 'show respect for the feelings and sentiments' of other religions while observing their religious ceremonies. However, it held that cow slaughter by Muslims was not illegal and that it was the 'legal right of every person to make such use of his own property as he may think fit', even if, in doing so, he hurts the 'susceptibilities of others'. Muslims were allowed to slaughter cows in the village, so long as they did not create a nuisance. In 1928, the Allahabad High Court allowed a Muslim to sacrifice a cow in his 'residential house' and 'in any place which is not exposed to the public view'. Thereafter, in 1930, an Indian judge of that court, Justice Sen, allowed Muslims to slaughter cows over the protests of Hindus. He said that if the sacrifice took place 'within walled enclosures, so that no one could see the process from outside', or if it took place quietly, with decency, and 'unattended with noisy or riotous demonstration', then no Hindu could object. He added that if such sacrifices offended 'the Hindus individually or collectively, the act cannot be branded as a public nuisance for the law makes no allowance for the susceptibilities of the hypersensitive'. On the other hand, a Muslim who deliberately tried to slaughter cows in a manner that would be visible to Hindus was considered to have violated the law. For instance, a Muslim who slaughtered a cow in front of a Kali temple was put through a trial and convicted. However, cows were not only slaughtered or consumed by Muslims in British India. As Gandhi repeatedly wrote, there were slaughter-houses in 'all the big cities of India' where '[t]housands of cows and bullocks' were slaughtered, for supplying beef to the British. 'We say nothing to the English in India for whose sake hundreds of cows are slaughtered daily', he wrote. 'Our rajas do not hesitate to provide beef for their English guests', he said. 'Our protection of the cow, therefore, extends to rescuing her from Mussulman hands.' Nehru too believed that cows were frequently slaughtered in British India in order to supply beef to the British army. Even Hindus were partially responsible for cow slaughter in British India. As Gandhi wrote, 'The cows find their neck under the butcher's knife because Hindus sell them. 'To blame the butcher', he wrote, 'is like blaming the doctor for your fever.' He also noted that cows were exported to Australia, often from Gujarat and Kathiawar, for producing beef that was 'worth crores of rupees'.

'Even our Muslim brethren', he wrote, 'do not carry out so much slaughter on Bakr Id day'. 'We [i.e. Hindus] thus commit this sin directly', he added. Livestock census results for 1935 showed that while 80 per cent of cows in India died naturally, 20 per cent were slaughtered.33 It was not merely the British and Muslims who consumed beef. As Ambedkar wrote, census results showed that 'the meat of the dead cow' was the '[c]hief item of food consumed by communities which are generally classified as untouchable communities'. Though members of 'lower' castes did not slaughter cows, Gandhi wrote of how they ate carrion 'with the greatest relish'. Even upper-caste Hindus sometimes consumed beef. Gandhi spoke, on more than one occasion, of his 'Vaishnava friend who had beef tea saying he had to take it because his doctor said that he would not survive without it'. Gandhi frequently argued that cows should not be slaughtered in British India. In supporting this argument he appealed both to religion and to economics. Thus, on the one hand, he wrote that the cow was 'the protector of India' because India was an 'agricultural country . . . dependent on the cow' and the cow was 'a most useful animal in hundreds of ways'—an argument founded in economics and the importance of the cow to India's agricultural economy. On the other hand, he would say: 'If someone were to ask me what the most important outward manifestation of Hinduism was, I would suggest that it was the idea of cow protection'—a plainly religious argument. The 'worship of the cow', thought Gandhi, was Hinduism's 'unique contribution to the evolution of humanitarianism'. 'Cow-preservation is an article of faith in Hinduism', he wrote. He even encouraged his followers to give up 'buffalo milk and ghee'. 'Cow's butter (and ghee)', he said, 'has a naturally yellowish colour which indicates its superiority to buffalo's butter (and ghee) in carotene'. India's 'prejudice in favour of buffalo's milk and ghee', he felt, was making the cow extinct. Gandhi was of the view that cow worship was 'largely confined to Gujarat, Marwar, the United Provinces and Bihar'.

However, Gandhi believed that Muslims should not be forced to give up cow slaughter, that they should do so of their own volition. He urged his followers to try to peacefully convince Muslims to avoid slaughtering cows. '[I]t would redound to the credit of Hinduism', he wrote, 'if stopping of cow-slaughter was brought about not by force, but as [a] deliberate voluntary act of self-denial on the part of Mussalmans and others.' He praised Muslim leaders like Maulana Abdul Bari who urged their followers to avoid cow slaughter, and the Ali brothers who stopped beef-eating in their households. He wrote that cow slaughter was optional in Islam, that Muslims were 'not enjoined by the Quran to sacrifice a cow'. He, of course, strongly argued against the use of violence in preventing Muslims from slaughtering cows. However, he also felt that legislation should not be enacted to ban cow slaughter in India. To force a Muslim, by law, to avoid cow slaughter, he believed, would 'amount . . . to converting him to Hinduism by force'