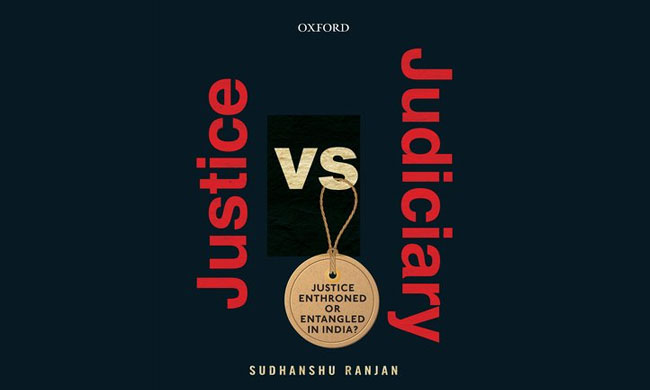 The telos of any written constitution, in the ontological sense is seen in articulation of devices which controls the power of various organs of the state. No organ/instrumentality of the State is expected to exercise a power beyond what is approved by the Constitution. The Constitution is supreme and all the authorities including the judiciary shall confirm to this supreme law of the...

The telos of any written constitution, in the ontological sense is seen in articulation of devices which controls the power of various organs of the state. No organ/instrumentality of the State is expected to exercise a power beyond what is approved by the Constitution. The Constitution is supreme and all the authorities including the judiciary shall confirm to this supreme law of the land which manifests the permanent will of the people. Traditionally, the judiciary was understood to be the least dangerous branch of the state but this is no longer true. Judiciary now wields more powers than it was conferred on by the Constitution. There is clear and convincing evidence that power of the courts has increased worldwide in the last few decades and Indian judiciary has been a frontrunner in this race. This judicial power which has witnessed an extraordinary expansion has gone beyond anything that drafters of the constitution even could have imagined. However, judiciary has emerged as one the only institution which is virtually not accountable to the Constitution but relishes exceptional constitutional privileges and arduous artillery to silence the any critic.

The book Justice vs Judiciary by Mr. Sudhanshu Ranjan conquests market at a time when judiciary especially the constitutional courts are going through a crisis of credibility. Ranjan's book is timely because it takes up the obstinate stiffness between the desire for judicial independence and evasion of judicial accountability. A veteran journalist, prolific author and columnist, Mr. Sudhanshu tries to bring the critical perspective to bear on this polarizing debate. The author discourses certain scintillating paradoxes with respect to the working of the institution and sheds light on contemporary judicial and moral conundrums.

In the first paradox, author argues that the Supreme Court which tried to keep a constant check over every other organ/institution/body under the Constitution failed to apply similar method of accountability to its own functions. How a judge is appointed in the High Court or elevated to the Supreme Court, how is a judge appointed as the Chief Justice of a High Court and how and when a judge is transferred from one High Court to another high court? Whether the views of the consultee-judges are given due weightage by the collegium? The simple answer is, the public does not know anything about it even after twenty-five years of such a mechanism in practice. The reason has been the Judiciary's double-moral attitude towards right to information, despite its preaching, how vital is the citizen's right to know, how its public institutions are functioning. The decisions of the Supreme Court directing that the Chief Information Commissioner must only be a former judge of the Supreme Court or a retired chief justice of the High Court and other judicial members must be amongst the former judges of the high courts was a clear intrusion into the legislative domain [ page 38]. Lifting president's rule for few hours, sending Sahara Chief Mr. Subrata Roy jail without FIR, contradictory and declining quality of judgements (p.68) and rising corruption (p.103) etc. are blatant examples, which corrodes the public trust in the institution. Author appropriately argued that judicial independence and judicial accountability are not antagonistic but rather complementary and suggest various measures to ensure accountability.

The second chapter of the book entitled "Binary Application of Laws" describes another glaring paradox in the decision-making process where guardian of the fundamental rights itself dilutes the cardinal principles of judicial decision making i.e. neutrality, uniformity and predictability. Author contends that laws, more often than not, have been applied in such a way as to favour the "privilegentsia" which defy logic and reason. In case of former Prime Minister P. V. Narasimha Rao, the court practically nullifying the provisions of the Criminal Procedure Code, directed that he would not be arrested even if his bail petition was rejected by the lower court. Another glaring example was cited where court demonstrated a rare magnanimity in favour of Mr. Lalu Prasad Yadav, when two separate benches of the Supreme Court were available to hear Lalu's bail application. When thousands of undertrials are languishing in different jails for years and decades for want of hearing, and it takes several weeks, even months for an ordinary bail petition to be listed for hearing, the generosity of the court in favour of privileged class raises serious doubt on the rule of law. The book records the cases where the Supreme Court has acknowledged the principle that even the humblest citizen of the land, irrespective of his station in life, is entitled to present his case with dignity and is entitled to be heard with courtesy and sympathy. But these magniloquent preachings are seldom practiced into practice. This weakens the Rule of Law and erodes the confidence of people in the judiciary. [Sheela Barse v. Union of India, (1988) 4 SCC 226].

This book then critically examines the power of Supreme Court under Articles 142, which now makes it, the most powerful institution in the country. Using this power, the apex court sometimes, unmindful of the budgetary and other vital implications, tends to pass orders which lack the scope for implementation. Since the 1990s, the Supreme Court has been frequently passing orders in contravention of substantive laws. Even divorce has been granted by mutual consent and on the ground of irretrievable breakdown of marriage notwithstanding the fact that the Hindu Marriage Act, 1955, does not provide for it. But unfortunately, the apex court has not used even this extraordinary principle uniformly. It did not take recourse to this extraordinary power in Omprakash and Ors. v. Radhacharan and Ors. and allowed the property acquired by a childless widow who died intestate (without leaving a will) to devolve on her husband's sister's sons. The court in exercise of its power under Article 142 is also using abstract principles like constitutional morality which is a precarious trend and may turn upside down the established canons of judicial interpretation. The inconsistent invocation of Article 142 and also principle such as 'constitutional morality' which seems to have no definite boundaries, can invade into the legislative domain and that would be fatal for a Democracy.

The problem of delay in the disposal of cases pending in law courts is a consistent and probably the most severe phenomenon. Long delay in the disposal of cases has resulted in huge arrears and heavy backlog of pending ﬁle in various courts in the country. A significant number of pages have been devoted by the author to outline the causes of this problem. Judiciary is primarily attributed for not taking firm measures to tackle the systemic disorders of the judiciary such as delay and adjournments. Every Chief Justice of India swore by the idea of timely justice and tried to solve the problem, but failed shorten the long vacations and holidays routinely enjoyed by the judges of the Supreme Court and the High Courts. Author also explores menace of corruption in the justice administration and the 'art' of getting adjournments ad nauseam. He also emphasized that increasing judge-population ration will not be a solution to this problem. It is the quality of judges that matters not the quantity.

Justice has become the overpriced commodity earmarked for the highest bidder? This is the plight of common litigants in India. The cost of litigation has become major barrier in access to justice. The commercialization of Indian Bar which has moved beyond the ideal of public service have confined the Supreme Court and High Courts only for the filthy rich. India has a strong legacy of "cause lawyering", inherited from the framers of our democratic republic. However, with the passage of time the role of a lawyer has undergone several forms of re-negotiations with new approaches and new needs of Indian polity essentially. Lawyers have a critical role to play in developing society presenting unending challenges of evolutionary and revolutionary changes. All the more so in constitutional democracies like India which is a living epitome of the rule of law and follows core value of welfare state. Essential socio-economic changes for steering in that ideal must be brought about by the due process of law.

When India ushered in freedom it was expected that the scars of colonialism would be obliterated sooner rather than later but it was one of the biggest disappointment. The author in his last chapter entitled "My Lord or Your Excellency" has strongly criticized the inherent "feudal mindset" predominant in the higher judiciary. Political compulsion forced politicians and legislators to impersonate equality but unfortunately judges are reluctant to adapt themselves and cast off the veneer of feudalism even for the sake of tokenism. In spite of circular issued in the early fifties of the last century that judges of superior courts would be addressed as Sir; or Mr. Judge; and not as My Lord and It Honourable; would be used only for the court, not for the judge neither judges were ready to adapt themselves to the new democratic mores nor were lawyers prepared to risk their practice. It has also become almost mandatory to use Honourable for the judge. The nameplates carry this honorific and in some cases the judges themselves use it with their names even in private correspondence.

Over all the book is a tour de force for students, scholars, lawyers, judges and legislators. It should lay the foundation for a more robust debate on decision-making in constitutional courts and how best to ensure judicial accountability so that the integrity of judiciary can be reinstated. However, the possibility of author being levelled as prejudiced or biased cannot be renounced. Objectivity is the most prized element in a scholarly literature specifically in a peer review. On several issues viz. Article 142, it appears that the author presents a one-sided view, or dwells on his opinion without giving equal space to divergent views. Nevertheless, Justice vs Judiciary sends a strong message that if judicial accountability is not ensured, people's faith the judiciary will collapse.