[Book Review] A Festschrift in Honour of Nani A. Palkhivala 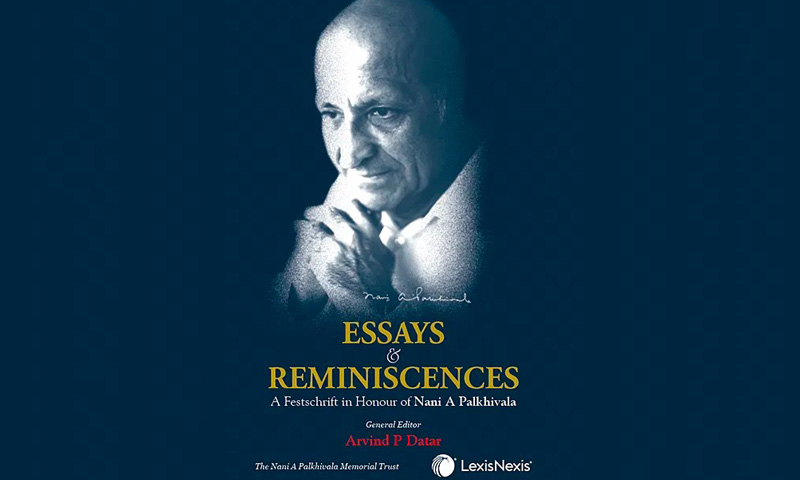 (Essays and Reminiscences: A Festschrift in Honour of Nani A. Palkhivala edited by Arvind P. Datar, published by LexisNexis, Gurgaon, 2020; pp: xlii + 532. Price: Rs 795)This year marks the centenary of the birth of Nani Palkhivala. By any standard, the contribution that this remarkable human being made during his 82-year-long life to various aspects of public weal in India was as striking...

This year marks the centenary of the birth of Nani Palkhivala. By any standard, the contribution that this remarkable human being made during his 82-year-long life to various aspects of public weal in India was as striking as it was substantial. Quite deservedly, he was, during his lifetime, feted with a variety of tributes, awards and decorations, and few will disagree with C. Rajagopalachari's pithy observation that Palkhivala was "God's own gift to India." It is hardly surprising, then, that a book of essays in his honour has been published to mark the centenary.

The volume is sponsored by the Nani A. Palkhivala Memorial Trust and edited by Arvind Datar, a Madras-based Supreme Court lawyer who has also been involved in perpetuating the late polymath's reputation in other ways, including by bringing out the latest edition of Palkhivala's monumental commentary on the law and practice of income tax. Linguistic purists may query the sub-title of this book, A Festschrift in Honour of Nani A. Palkhivala, on the grounds that festschrifts are usually prepared as an offering to a living person to mark a milestone event in their life; this volume should therefore, they would argue, have been more appropriately called A Gedenkschrift in Memory of Nani A. Palkhivala, but that is a minor quibble. (A festschrift for Palkhivala was, incidentally, published – by Butterworths – and presented to him in 2000; it is probably out of print now.)

There are four parts to this book consisting, respectively, of: 19 stand-alone essays on a range of topics spanning the law, taxation, economics and governance; 29 pieces of reminiscences; 18 articles authored by a young Palkhivala; and 23 items of correspondence and other documents (the last part offers further scope for a protest from pedants: the index heading talks of "correspondences" — a term which, experts have argued, does not exist, because "correspondence," like evidence, is compendious enough to include the plural). Very roughly, the stand-alone essays account for half the bulk of the book, with the other material collectively comprising the other half. Remarkably, the volume has a back index but any elation that this discovery may engender in the reader will soon be dissipated by the realisation that it is the product of extreme amateurishness.

What about the essays then? As can be expected, they vary in quality. Some of them are conspicuously good, with a contribution from Sudhish Pai, a practising lawyer from Bangalore, leading the pack. He offers a superbly argued critique of public interest litigation which, he says, has led to "a distortion of constitutional government" as a result of the unprincipled and indiscriminate manner in which this genre of litigation has been encouraged by the Supreme Court of India. Pai's essay is as noteworthy for the rigor of his reasoning as it is for the lucidity of his articulation. Other articles which are characterised by substantive solidity are those by the sociologist Dipankar Gupta (on the dynamics between rights and duties), Gautam Bhatia (on the Basic Structure theory in constitutional law), Ajay Vohra and R. V. Easwar (both of whom deal, in slightly different styles, with the imprint left by Palkhivala in the area of taxation), and Vinay Sitapati (on the parallels between Palkhivala and the former Indian Prime Minister, Narasimha Rao, as economic reformers).

There is another category of articles which offer much food for thought but which many readers may find hard going because of either an overly-academic approach which does not sit well in a book such as this (e.g. Rahul Unnikrishnan on the differences between retroactive and retrospective legislation), or an unappealing presentational style (e.g. N. S. Nappinai on social media). Some of the contributions also read as if they are a bunch of disjointed themes stuck together without any thought being given to internal coherence or easy flow (e.g. Porus Kaka on the changing world of international taxation — this essay suffers from the further blemish of combining personal reminiscences which occupy over a third of the already skimpy text).

Arguably, the most unsatisfactory part of the book is the one dealing with reminiscences. There are many criticisms that can be made of this section. For a start, some contributions are so short that they would raise eyebrows if they had been included in a souvenir brought out for a humdrum cultural event (e.g. by Minoo Shroff). What makes such items even less justifiable is that some of them are from people who have worked closely with Palkhivala (e.g. Shirin Bharucha, Ratan Tata) and who would therefore have had something more substantial to say. Sadly, this criticism would also apply to the contributions from some members of Palkhivala's close family — who could have been more forthcoming in their sharing of memories of a more domestic or personal nature.

Another shortcoming of this section is that, even where a contribution is of a decent length, there is often a tendency for clichés to come to the fore. Some essays consequently sound fairly pedestrian and formulaic. Part of the problem lies in the selection of contributors — choosing those who may have had little or no familiarity with Palkhivala, or leaving out those who may have known him well enough to provide interesting stories and anecdotes, can affect the quality of the book quite markedly.

Ironically, one of the most captivating contributions by way of reminiscences is also one of the most error-ridden in the entire book. It is by S. Divakara, who, as secretary of the Forum of Free Enterprise, had occasion to interact closely with Palkhivala for many years. He offers valuable insights into Palkhivala's character as a human being, but in a rather rambling, inarticulate way. If only a sharp editorial pencil had been brought to bear on this contribution, it would have enhanced the worth of the book significantly.

In the midst of all this, a generic shortcoming which afflicts nearly all biographical or biography-type publications in India — including festschrifts — cannot be lost sight of: it is a tendency to adopt a fulsome tone which sets its face firmly against saying anything even remotely unfavourable about the subject of the work. This results in readers being denied a rounded picture of the person and it prevents any insights being offered into the complexities of his or her character. Contrast this with the more mature attitude adopted by biographers elsewhere in the world: some of the best in the genre refer unabashedly to serious flaws and imperfections in their subjects without taking away from the credit or the praise that is due to them.

This book, alas, is no exception to that unfortunate tendency. There is no mention about any of the controversies that Palkhivala was involved in — such as his public spat with Nusli Wadia following the latter's attempt in 1998 to invest in the Associated Cement Companies then headed by Palkhivala; the inevitable disappointment that must have been caused to Palkhivala by being denied the opportunity to succeed J. R. D. Tata as the head of the Tata empire against much expectation; the rumblings connected with his continued occupation of a coveted office on the fourth floor of Bombay House well after he had ceased to be active as a director of Tata companies, to name only a few. Nor does the book even refer to such other facets of Palkhivala's personality which also would be of interest to his admirers and detractors alike, as his steadfast devotion to, and support of, the controversial godman Sathya Sai Baba. Palkhivala's domestic life and personal preoccupations appear to be completely out of bounds for any comment in this volume — which many readers will consider a pity. Interestingly, Palkhivala's own views on the matter — contained in an essay he wrote for Mumbai Varthaman and which is included in the book — are telling:

A biography that is pure eulogy is as useless as a novel that is all moral and no story. Blind hero worship that prompts a biographer to hide the foibles of his demi-god has made English biography almost a branch of hagiology, as a shrewd critic has remarked.

What Palkhivala would have thought of the approach adopted by those behind this festschrift can only be speculated upon. But one thing on which there can be more certainty is that he would not have taken very kindly to the poor proofreading and the inattention to detail that, sadly, disfigures the book. Examples include bad grammar (e.g. "late Chief Justice"/"late Behram Palkhivala," "alternate" for alternative), spelling howlers (e.g. "socialialism" for socialism, "miniscule" for minuscule, "Rajani" for Rajni, "Baruah" for Barooah) and a certain laxity in the editing to which reference has already been made earlier. The publishers cannot escape their share of the blame for some of these failings.

All that having been said, should books like these — ideally, minus the blemishes! — be encouraged? The answer has to be resoundingly in the affirmative, not least because they have the potential to remind successive generations of the high ideals which animated Palkhivala's exertions in a cause which remains as relevant now as it was during his time. Whether the conviction expressed by the editor of this volume that "the respect for what he did and the interest to know (sic) he achieved so much in one lifetime, continues unabated" is demonstrably true, remains a moot point.

[Dr Venkat Iyer is a barrister and legal academic based in Northern Ireland, UK. A version of this review was published in Parsiana.]