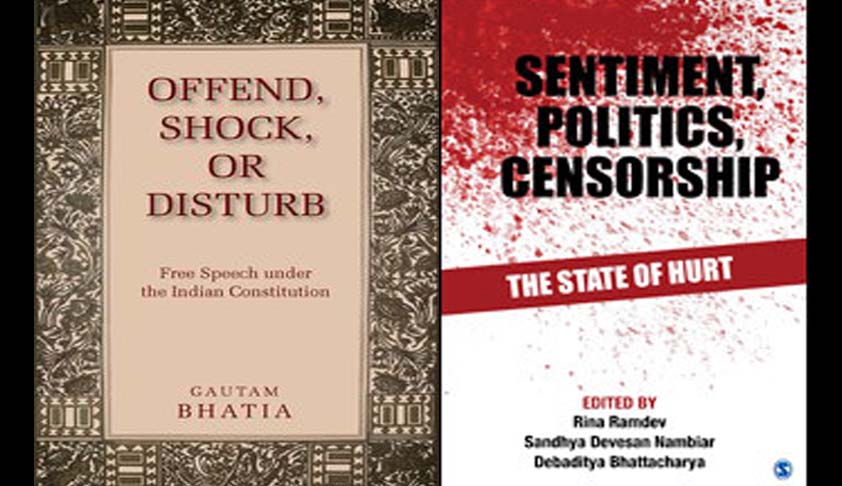 OFFEND, SHOCK, OR DISTURB:Free Speech under the Indian Constitution. By Gautam Bhatia, OUP, 2016, Pages 347, Rs.750.SENTIMENT, POLITICS, CENSORSHIP: THE STATE OF HURTEDITED BY Rina Ramdev, Sandhya Devesan Nambiar, and Debaditya Bhattacharya, Sage, 2016, Pages 281, Rs.895These two books appear at a time when the Indian Republic is grappling with new and menacing threats to the freedom...

These two books appear at a time when the Indian Republic is grappling with new and menacing threats to the freedom of expression guaranteed to its citizens by the Constitution. The threats are not just from the State, but also from many non-State actors, who, of late, have felt emboldened to  silence and intimidate those who exercise their right to free expression, because of the state’s connivance.

The book by Gautam Bhatia, a lawyer practising in High Court of Delhi and a visiting faculty, West Bengal National University of Juridical Sciences, is an outstanding effort to simplify to the readers, the principles and theories used or missed in our Supreme Court’s judgments on freedom of expression, from the beginning, on the basis of comparison with similar judgments from other countries.

The results of the author’s efforts are fascinating. The author takes note, right at the beginning, of the yawning, almost insurmountable gap between law and practice.  Take sedition, for instance.  It was left undisturbed on the statute books upon the understanding that it is limited to speech that can cause harm to public order.  But, as the author shows, the executive and lower judicial authorities have acted as if the Supreme Court’s judgment in Kedar Nath Singh v. State of Bihar (1962), which upheld the sedition law, but limited it to cases involving harm to public order, never existed.  Examples of action taken under the sedition law, which the author gives are arrest of people for protesting against a nuclear power plant, failure to stand up during the national anthem, and for publishing a mocking cartoon of the founding fathers.  “There has not even been an attempt to explain how any of these actions are remotely connected to public disorder”, the author says.

Freedom of speech is curtailed not by grand Supreme Court decisions upholding (while restricting) the law of sedition, or prior restraints upon the cinema, but by a thousand tiny cuts, on a daily basis – until the heckler’s veto becomes a part of the fabric of lived reality, whatever the Supreme Court might say, he argues.

A large number of speech-restricting provisions in our penal laws are classified as cognizable offences under the Code of Criminal Procedure.  This means that the police are authorised to arrest suspected offenders without the requirement of a judicially sanctioned warrant.  Most of these cases, Bhatia says, never come to trial, but the damage they inflict upon the actual working of the freedom of speech in India is obvious.

Therefore,  he suggests, if the  State wishes to ban a book or a film, or block a website, it should bear the burden of coming before a court and convincing it that the restriction falls within the contours of Article 19(2).  Alternatively, a regime of heavy civil damages, enforceable against the police (or the State, as the case may be) and effectively implemented, ought to be in place to provide a significant disincentive for frivolous arrests, he writes.

In this book, Bhatia articulates his nuanced support to repeal of laws which restrict free speech.  It is important to know, he says, how erroneous were the decisions of the Supreme  Court, while upholding the sedition law, and Section 295A of IPC, which led to Penguin Books withdrawing Wendy Doniger’s book on Hinduism.  A thorough understanding of the law of free speech, he says, will help to narrow the gap between the law and the practice.

The book is structured in such a way so as to ensure exhaustive treatment of the subject.  Starting with the background, the author moves on to an elaborate discussion of the restrictions, which are sought to be justified on the ground of public order, and sedition.   Obscenity, hate speech, and censorship of film and internet are covered in three chapters.

Bhatia discovers two broad streams of thought in Indian cases.  One is the moral-paternalistic vision of free speech, that is, the State believes that it is its bounden duty to protect people from malign influences.  The other is the liberal-autonomous vision which believes individuals, as thinking, deciding beings can choose for themselves how to lead their lives.  To ban speech, according to the latter school, is to insult the autonomy both of the speaker, and of the listener.   The latter school countenances restrictions on free speech in limited cases, such as incitement to imminent violence, or other, important constitutional values are implicated.

Bhatia finds that Indian jurisprudence is evenly divided between these two approaches, and that it is open for a  court to stamp  its own image upon free speech law, by definitively taking forward one line of jurisprudence at the expense of the other.  But he is convinced that whatever the court does, as long as the provisions with misuse potential remain on the statute books, the gap between law and practice will ensure that they will be abused.

Therefore, the book makes a persuasive plea to our Courts to change course, to meet the challenges posed by illegitimate restrictions on free speech, such as, arrests for Facebook likes and for political satire, banning of books that challenge cultural norms, and of films that raise serious issues, and persecution of investigative reporting, all of which make it deeply problematic for a polity that calls itself a democracy.

THE editors of the second book, under review, are all teachers of English.  They have put together 19 essays authored by different scholars on various dimensions of sentiment of hurt.  The contributors belong to a diverse range of professional practice such as academia, law, film, art, literature and activism.

In his opening essay, aptly titled, ‘How Far Can You Go?’, the editor of the Hindu Businessline, Mukund Padmanabhan, asserts that causing offence is one of the necessary by-products of free speech.  But he cautions that there is no unfettered liberty to do so.

Asking himself the question when does one person’s right to free speech trump another’s sensitivities, he answers that we will never know until somebody somewhere thinks we have gone further than we should have.

Dilip Simeon, in his essay, warns us that the so-called hurt sentiment has now become the cutting edge of a campaign to replace democracy with mob rule.  The degree to which we resist this,  will be the measure of our capacity to preserve the truest human capacity – the power to speak and to uphold truth, he says.

Siddharth Narrain, a scholar with Sarai, Centre for the Study of Developing Societies, New Delhi, in his insightful piece on the origins of Hate Speech Legislation in India, finds that Section 298 IPC, which deals with “wounding religious feelings” was opposed by thinkers during the 19th century, according to whom, it should not be criminalised unless it led to public disorder.

Narrain’s discussion of the history of Section 153A of IPC, and the Rangeela Rasool episode,  offers a useful perspective on the subject. He rightly observes that the procedure that the accused have to go through and the process of trial itself become a huge deterrent to speech.

The book includes essays by historian Mushirul Hasan, and legal philosopher, Lawrence Liang, although most contributors are drawn from University departments teaching English, political science, and related disciplines. Inter-disciplinary perspectives on a subject like this would add to our understanding greatly.

Both the books have indexes which are likely to be of great help to readers.