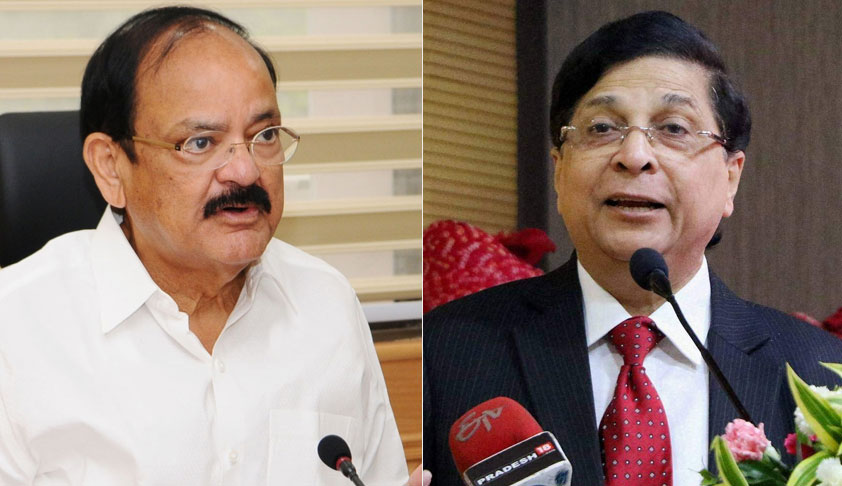 After rejection of their impeachment motion against Chief Justice of India Dipak Misra by Vice President of India Mr. Venkaiah Naidu, two Members of Parliament (MPs) have now approached the Supreme Court demanding a direction to the Rajya Sabha Chairman to constitute a Committee for investigating into the allegations against the CJI.Member of Parliament and Senior Counsel Kapil Sibal...

After rejection of their impeachment motion against Chief Justice of India Dipak Misra by Vice President of India Mr. Venkaiah Naidu, two Members of Parliament (MPs) have now approached the Supreme Court demanding a direction to the Rajya Sabha Chairman to constitute a Committee for investigating into the allegations against the CJI.

Member of Parliament and Senior Counsel Kapil Sibal mentioned the petition before the bench headed by Justice J. Chelameswar at 10:30 AM on Monday . The petition has been instituted on behalf of Rajya Sabha MPs Partap Singh Bajwa and Dr. Amee Harshadray

“The petition has been filed but it has not been numbered so far...the Registrar cannot take orders from the Chief Justice in this matter...for 45 years, the practice has been that the listing of a matter which the CJI cannot or is unable to determine has to be decided by the second seniormost judge...the procedure is simple...if Your Lordships wish to depart from it [unclear]...”, submitted Mr. Sibal.

When Justice Chelameswar mentioned the 2017 controversy regarding the listing of the petitions by CJAR and advocate Kamini Jaiswal in the Prasad Medical Education Trust matter, Mr. Sibal distinguished, “that case was different...there was no motion against the Chief Justice therein...how will the present matter be heard? When will it be heard? Who is to decide who the bench shall compose of?”

When Justice Chelameswar inquired about the recent direction of the CJI to mention fresh matters as well as matters for early listing before the Registrar (Judicial), Mr. Sibal clarified, “it was only an oral direction...there is no circular on the Supreme Court website to that effect...also, the CJI cannot delegate the power of the master of the roster to the Registrar...”

“Please take a judicial view of the matter...so that in the future, the course of action is clear...we are only concerned with the listing...Your Lordships may not pass any orders”, pleaded Mr. Sibal.

Finally, the bench, also comprising Justice Sanjay Kishan Kaul, directed the counsel to appear before itself at 10:30 AM on Tuesday.

The Petition, filed by Mr. Partap Singh Bajwa and Mr. Harshadray Yajnik, asserts that the rejection of the motion is "ex facie illegal, arbitrary and violative of Article 14", and demands that the order be quashed.

The Petition lists down the reasons given by Mr. Naidu to reject the motion and contends that Article 124 of the Constitution of India does not vest him with any quasi judicial powers in the process of removal of a Supreme Court Judge.

It explains, "The Impugned Order proceeds on an erroneous assumption in law that the Chairman/.Speaker, exercises quasi-judicial powers to determine whether to admit or not to admit a notice of motion and whether to constitute the aforesaid Committee. The Chairman/Speaker has to ensure that the signatures of 50 Members of the Rajya Sabha/100 members of the Lok Sabha as the case maybe, is in order and consequently refer the same to the Committee as contemplated under Section 3(2). The Chairman cannot sit and adjudicate over the adequacy, veracity and legal tenability of the allegations/charges contained in the said Notice."

It further relies on Section 3 of the Judges Inquiry Act, 1968, which provides investigation into misbehavior or incapacity of a judge by a three member committee, and submits, "Section 3 of the Inquiry Act, therefore, contains the substantive provision for creation of a statutory mechanism to enquire into the allegations against judges of the Supreme Court and the High Court. This statutory mechanism is the three member committee, as stated hereinabove. The Chairman/Speaker has no role whatsoever with regards to this Committee, excepting ensuring that said Committee is duly constituted."

The Petition however, demands that Section 3(1) of the 1968 Act, insofar as it enables the Chairman/Speaker to exercise his discretion on the allegations contained in a notice of motion be declared ultra vires Article 124 (4) and 124 (5) of the Constitution of India.