Breaking; Being an Advocate does not confer any immunity from investigation for a wrongdoing; Allahabad HC 7 Judge Bench directs strong action against Lawyers engaged in Violence in the Court 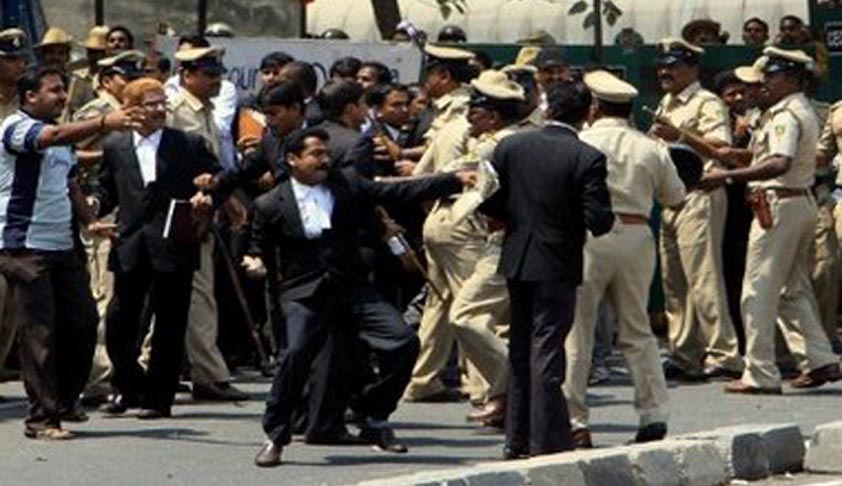 Being an Advocate does not confer immunity from investigation for a wrong doing and every person is susceptible to the reach of law for a criminal wrong doing which is committed like every common citizen, the Bench observed. The Court declared the Lawyer’s strike illegal and contempt of Court.

A Seven Judge Bench headed by the Chief Justice of Allahabad High Court has declared that the strike by Lucknow HC bench lawyers as illegal and issued directives for its immediate withdrawal.

On February 11th, the seven Judge Bench had taken Suo motu cognizance after noting themedia reports in regard to instances of large scale arson and violence which took place at Lucknow which originated in the unnatural death of a member of the Lucknow Bar. The Court had also issued a prohibitory order restraining one Advocate Vishal Dixit, who was seen in a photograph brandishing a pistol while in Lawyer’s attire, from entering the precincts of any Court, Tribunal or authority in the State of Uttar Pradesh without permission of the Court. The Court had also directed the Principal Secretary (Home) to give a comprehensive report on the incidents which took place. The matter was then posted to February 18th.

On Thursday, the Bench observed that being an Advocate does not confer an immunity from investigation for a wrong doing and every person is susceptible to the reach of law for a criminal wrong doing which is committed like every common citizen. A member of the Bar has the same rights as other citizens and equally shares the same responsibility and is subject to due process of law in the event of a criminal wrong doing. In the event that any person or individual has been wrongfully subjected to the criminal process, the rights and remedies which are open to a citizen are available for being pursued before this Court, the Bench observed. The Court noted that in the course of the arson and violence which took place in Lucknow HC, public property as well as private property of innocent bystanders has been damaged. The Court also said thatno individual, who is otherwise innocent of wrong doing, should be unfairly targeted merely because he or she is a member of the Bar.

Further proceedings on this issue is posted on February 23, 2016.