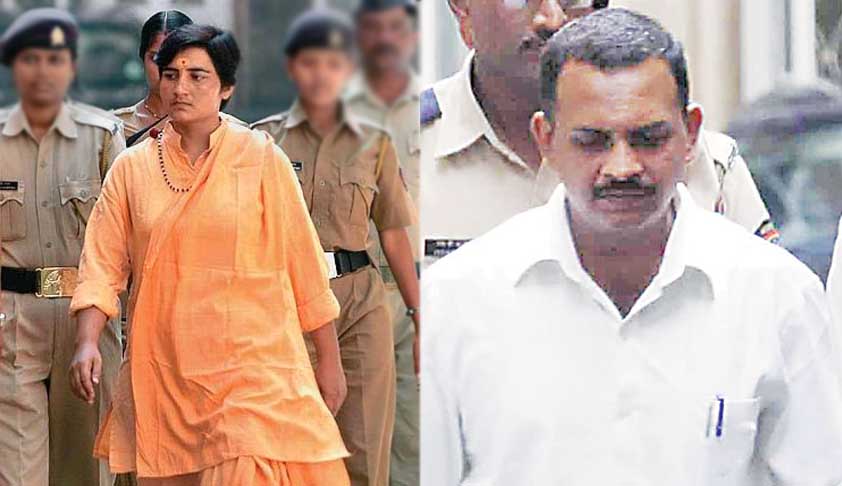 The Bombay High Court on Tuesday morning pronounced its judgement in the appeal filed by both Malegaon accused Pragya Singh Thakur and Lt. Col Prasad Purohit.

While Pragya's plea for bail has been allowed on a 5 lakh surety, Prasad Purohit's appeal against Spl NIA Court order has been rejected.

The bench of Justices Ranjit More and Shalini Phansalkar Joshi had reserved its order in February after hearing lawyers for both parties. While Senior advocate Avinash Gupta appeared for Pragya, Shrikant Shivde appeared for Lt Col Purohit.

Both the accused had sought bail ever since the National Investigation Agency dropped all charges against them under the stringent Maharashtra Control of Organised Crime Act (MCOCA) after taking over the investigation in 2011 from Maharashtra ATS.

The ATS had stated in its charge sheet that Pragya’s motorcycle was used in the blast that killed seven and injured 101 persons. This has been refuted by the NIA in its charge sheet for lack of evidence. Instead it has been stated that although the bike was in her name, it was used by an accused, who is absconding.

However, the NIA maintained charges against Purohit under relevant sections of CrPC and IPC, Unlawful Activities Prevention Act (UAPA), Explosive Substances Act and Arms Act in its charge sheet.

Opposing the rejection of bail by NIA court, Pragya’s lawyer argued that the court did not take into account the “change in circumstances” after NIA filed its charge sheet.

Rejecting Pragya’s bail application, NIA court had observed: “It cannot be said that due to filing of further report by NIA, there is any change in circumstance. If this is the position, then merely on the ground that now NIA has given no objection, it is difficult to accept the prayer of applicant.”

Appearing for one of the victims of the blast, senior counsel BA Desai had submitted that because the NIA filed a supplementary charge sheet and re-investigated the matter, bail could not be granted, as there is prima facie case against Pragya Thakur.

He stated that Pragya Thakur provided RDX for the blasts of 2008 and there is data extracted from laptops and pen drives of the witnesses and other accused, call records, confessions and extra judicial confessions to prove this charge. While the NIA opposed Purohit’s bail, NIA’s counsel ASG Anil Singh submitted that the agency had no objection to Pragya’s bail.