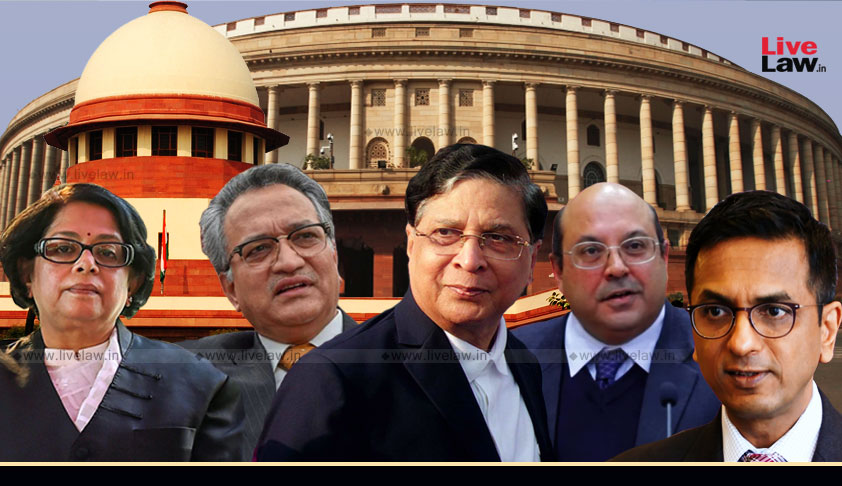 The Court expressed anxiety at the increasing criminalization of politics; but left the matter to be addressed by the Parliament.The five-judge Constitution Bench of the Supreme Court held that candidates cannot be disqualified merely because  charges have been framed against them in a criminal case. The bench has urged the legislature to consider framing law to ensure decriminalisation...

The Court expressed anxiety at the increasing criminalization of politics; but left the matter to be addressed by the Parliament.

The five-judge Constitution Bench of the Supreme Court held that candidates cannot be disqualified merely because  charges have been framed against them in a criminal case. The bench has urged the legislature to consider framing law to ensure decriminalisation of politics.

(i) Each contesting candidate shall fill up the form as provided by the Election Commission and the form must contain all the particulars as required therein.

(ii) It shall state, in bold letters, with regard to the criminal cases pending against the candidate.

(iii) If a candidate is contesting an election on the ticket of a particular party, he/she is required to inform the party about the criminal cases pending against him/her.

(iv) The concerned political party shall be obligated to put up on its website the aforesaid information pertaining to candidates having criminal antecedents.

(v) The candidate as well as the concerned political party shall issue a declaration in the widely circulated newspapers in the locality about the antecedents of the candidate and also give wide publicity in the electronic media. When we say wide publicity, we mean that the 98 same shall be done at least thrice after filing of the nomination papers.

The Bench observed that  time has come that the Parliament must make law to ensure that persons facing serious criminal cases do not enter into the political stream.

"It is one thing to take cover under the presumption of innocence of the accused but it is equally imperative that persons who enter public life and participate in law making should be above any kind of serious criminal allegation. It is true that false cases are foisted on prospective candidates, but the same can be addressed by the Parliament through appropriate legislation. The nation eagerly waits for such legislation, for the society has a legitimate expectation to be governed by proper constitutional governance. The voters cry for systematic sustenance of constitutionalism. The country feels agonized when money and muscle power become the supreme power. Substantial efforts have to be undertaken to cleanse the polluted stream of politics by prohibiting people with criminal antecedents so that they do not even 100 conceive of the idea of entering into politics.".

In its petition filed in 2011, the NGO had essentially sought guidelines or framework to deal with the menace of criminalization of politics, and had demanded that those charged with serious offences be debarred from contesting elections.

The matter was initially referred to a three judge bench, which was expected to examine: Whether disqualification for membership can be laid down by the Court beyond Article 102(a) to (d) and the law made by Parliament under Article 120(e)?

The five-judge Bench had then commenced hearing the petition on August 9. On the final day of the hearing on August 28, the Bench had posed tough questions on the feasibility of the proposition.

The five-judge bench, in view of the principle of separation of powers and the consequent “Lakshman Rekha” between the Legislature and the Judiciary, had been Disinclined to “exhort the Parliament” to lay down a law for disqualification of candidates who are facing serious charges.

The court had observed that while the power of superintendence and control of elections as vested in an Election Commission under Article 324 is only general, Article 102(1)(e) specifically envisages a ground for disqualifying one from being chosen as or being an MP to be prescribed by a law made by the Parliament.

The bench had noted that the law in this behalf is not silent (unlike the Vishaka case); that the law so enacted by the Parliament, being the Representation of People’s Act, provides for disqualification upon conviction.

The court also expressed doubts over the prayer for issuing mandamus to the EC to extend this disqualification to all stages of a criminal proceeding, such a direction being tantamount to creating a new offence and, by extension, laying down the law.

Alternatively, on behalf of the petitioners, it was suggested that the court may direct the Election Commission to restrain political parties from granting tickets to or accepting support from independent candidates with criminal antecedents.

Referring to the Election Symbols (Reservation and Allotment) Order, 1968, it was advanced that the assignment of an election symbol to a recognised political party be rescinded if it is found in violation of such a mandate of the EC.

“Can we let a person get the ticket and have the political party announce that the candidate has been charged with rape or murder? We will see what we can do in context of disclosure...eligibility is different...we cannot be asked to indirectly something we cannot do directly...you are indirectly adding a disqualification by taking away his symbol...it is like saying the whole world is yours but you have no money...”, reflected Chief Justice Dipak Misra.

“The Attorney General has argued that going back from conviction to the stage of charges is not acceptable as the presumption of innocence attaches throughout...if there is a recognised political party, the only symbol a candidate of the party can use is the one assigned to the party...the moment we declare that a person charged with a heinous offence cannot stand in the election on that symbol, it is tantamount to creating a new offence from the backdoor that once the candidate is charged, he is disqualified...”, weighed in Justice Rohinton Nariman.

Submitting that the presumption of innocence is misplaced, Senior Counsel Dinesh Dwivedi indicated sections 227 and 228 of the Cr. P. C., on discharge and the framing of charges respectively. While the former allows the judge to discharge the accused if, after considering the submissions of the prosecution and the records of the case, he believes that there are no sufficient grounds for proceeding, the latter envisages the framing of the charges only when the Judge is of opinion that there is ground for presuming that the accused has committed an offence.

Senior Advocate Krishnan Venugopal reiterated that on account of the tremendous criminalisation of politics, democracy is suffering- “Are Your Lordships supposed to sit back and do nothing as criminals enter into politics and hypothetically, end up controlling the government? Can the principle of Separation of Powers stand in your way?”, he posed.

On behalf of the ECI; Senior Counsel Meenakshi Arora had submitted that though the ADR and PUCL judgments envisage a disclosure of criminal antecedents, the same is only on affidavit which is put up on the website of the ECI at the last minute- “it is filed at the time of nominations upon which one proceeds to election...not everybody has the access to the website...”. With the Chief Justice agreeing that the right to Information means proper information, the bench had proceeded to reserve its judgment.

The idea of strengthening the parameters of qualification so as to debar candidates with a criminal record from qualifying for contesting elections had initially found favour with the bench.

In as much as section 29A of the RPA provides for registration with the EC of associations and bodies as political parties, the bench had considered requiring members of a political party to affirm on affidavit that their record is untainted and if the statement is found to be false, the party shall bear the brunt, its registration being conditional on it.

The hearing had witnessed an innovative suggestion by Advocate Gopal Sankaranarayanan- seeking inspiration from the pictorial and textual warnings printed on the packets of tobacco products, he ventured that the EC require political parties to disclose the criminal antecedents of their candidates on the posters and banners used in campaigning.

At the first hearing, Justice Nariman hinted that the court may instead strengthen the offence already provided for, that special courts could be established for persons charge-sheeted after filing the nomination papers and that the process between trial and judgment could be fast-tracked.

“In case of a person against whom charge sheet is filed, there could be day-to-day trial and once the judgment is pronounced, he would automatically stand disqualified”, the Chief Justice had elaborated.

Attorney General K. K. Venugopal had drawn the attention of the bench to section 7 of the RPA providing that a MP or MLA may be not disqualified on any other ground other than those specified in the Act. Justice Nariman had assured that the bench had not missed the provision.

The hearing was also privy to some interesting observations by Justice D. Y. Chandrachud- “the constitution speaks of qualification and disqualification. In the RPA, section 32 deals with nominations, while section 36(2) provides for the rejection of nomination where the candidate is either not qualified or is disqualified. The qualifications are prescribed in Article 84. So aside from the disqualifications, you must still be a qualified candidate. Apart from disqualification, is a person who is facing a serious charge qualified to subscribe to the oath in Schedule III?”

“suppose one is facing a murder charge and the charges have been framed. Can he take the oath?”, reiterated Justice Nariman.

Replying in the affirmative, the AG had said that being entitled to Article 21, the candidate has the right to undergo the entire gamut of trial and enter his defence. “There is nothing in the oath except allegiance to the Constitution and the law...why can he not stand by the Constitution even if he is guilty?”, advanced the AG.

“We have to act as per the preliminary legislation which exists in this case. Nothing can be added”, he had asserted.