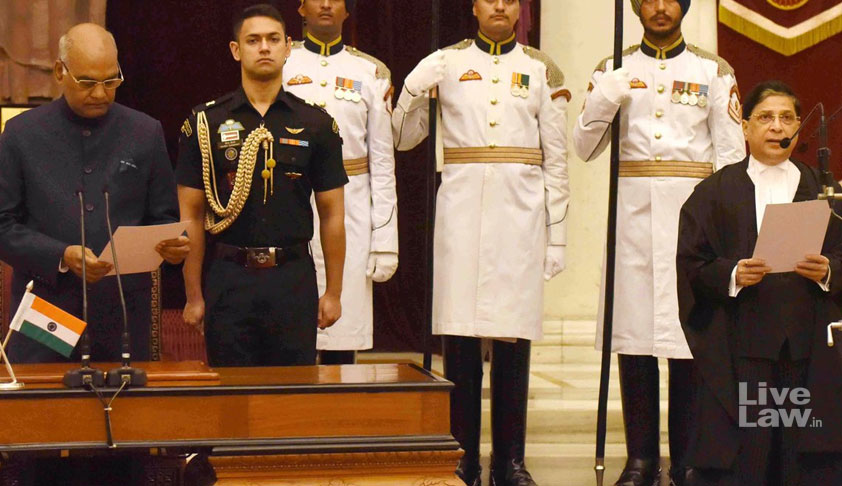 Justice Dipak Misra, the senior most judge of India was sworn in as 45th Chief Justice of India. President of India Ram Nath Kovind has administered oath of office to Justice Misra at Rashtra

The bench headed by CJI Misra will be hearing 72 cases on Monday, including the Students Islamic Movement of India (SIMI) ban case.

Justice Misra is also famous as the judge who issued the controversial order that all cine-goers should stand in attention when the national anthem is played before a movie. It is he who is issuing periodic orders in a PIL for gradual blocking of pornographic sites

He has his work cut out - filing up judicial vacancies, dealing with contentious cases such as Ayodhya, Cauvery and women's right to enter the Sabarimala temple in Kerala.
He also gets the contentious MOP (Memorandum of Procedure of appointment of judges) issue in legacy from Khehar.

The collegium hasn't agreed to the security clause which would allow the government to veto superior court appointments. That will be a tough one.

Justice Misra was also among the three judges who were up all night in July 2015, giving a historic hearing to decide on Yakub Memon's last-minute appeal against his hanging. Memon was convicted in 1993 Mumbai blasts, in which 257 people were killed. It was Justice Misra who announced the court's decision at 5 am: "Stay of death warrant would be a travesty of justice. The plea is dismissed," he said. Memon was hanged two hours later.

He was the Chief Justice of the Delhi High Court before he was elevated as a Supreme Court judge in 2011,

Justice Misra had been described as a "pro-citizen judge" by his peers. It wasJustice Misra who had ordered the police to upload a copy of the police complaints registered by the police, or First Information Report, on their website within 24 hours so that the accused and victim did not have to run around for a copy.

He was elevated as a Judge, Supreme Court of India, with effect from October 10, 2011.