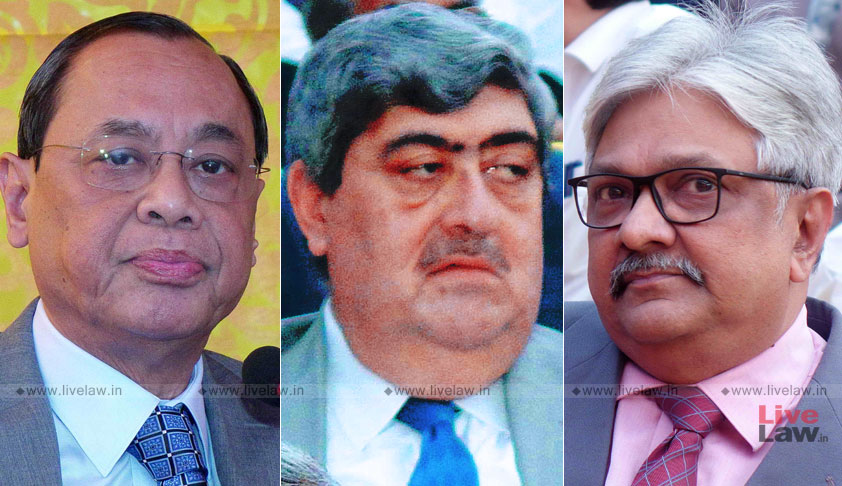 The Supreme Court bench of Chief Justice Ranjan Gogoi, Justice S. K. Kaul and Justice K. M. Joseph on Wednesday expressed its wish to be apprised by the government of India of the steps in the decision making process followed in the controversial procurement of the 36 Rafale fighter jets from France.The bench, however, clarified that the details so sought would not cover the pricing or...

The Supreme Court bench of Chief Justice Ranjan Gogoi, Justice S. K. Kaul and Justice K. M. Joseph on Wednesday expressed its wish to be apprised by the government of India of the steps in the decision making process followed in the controversial procurement of the 36 Rafale fighter jets from France.

The bench, however, clarified that the details so sought would not cover the pricing or the suitability of the equipment for the Indian Airforce, bearing in mind the sensitive nature of the matter.

Further, it categorically observed that no notice is being issued at the present stage, that any of the averments in the PILs instituted by Advocates M. L. Sharma and Vineet Dhanda, “which appear to be grossly inadequate”, have not been taken into account, and that purpose behind the order is only to satisfy the court.

During the hearing on Wednesday, Attorney General K. K. Venugopal urged the bench to not entertain the writ petitions- “this is a matter of national security....40 questions were asked in the Parliament which have only been selectively reproduced before Your Lordships....If notice is issued, it would be to the Prime Minister and so on....This is not a PIL in the traditional sense where the interests of weaker sections are to be safeguarded....These pleas are political in nature, filed for political gains in the light of the fight between the opposition and the ruling party....”

“This is not a judicially reviewable issue. courts do not interfere with international treaties....for a domestic court to interfere with one would not be appropriate....”, advanced the AG.

“Suppose we ask for the details of the decision-making process in sealed cover, how would you react? It shall only be for perusal by the judges, without touching on the technological parameters or the suitability in terms of the national events?”, inquired the Chief Justice.

“it is a matter of national security. I myself will not be given the details....as for the purchase protocol, it is called the Defence Procurement Procedure, which has been followed for years....”, replied the AG.

Opening the case, Mr. Sharma submitted that he has challenged the inter-governmental agreement between India and France-

“this is a contempt matter governed by international law....this treaty is to be quashed under Articles 49 (inducing a State to conclude a treaty by fraudulent conduct on behalf of another negotiating State) and 51 (State’s consent to be bound by a treaty procured by coercion of its representative) of the Vienna Convention....in the event of corruption, both India and France are duty-bound to cancel the treaty and nullify all its outcome....”

“I have filed a document that discloses the actual value of the jet to be 71 million Euro as per the parliament of France. As per the annual report submitted by Dassault Rafale (French Armament firm) to the government, which is also available internationally, the supply to India was to be made for over 206 million Euro....In 2008, Mukesh Ambani’s Company was in discussion with Dassault, a Swedish company and Euro-fighter- all three jets are the same in terms of quality....tender was floated by the Union of India, containing an undertaking linking the clearing of the tests of the Defence Purchase Procurement with the bank guarantee....in 2014, Eurofighter issued a letter to the then Defence Minister Arun Jaitley that it is reducing the prices of the jet, which would be subject to further negotiation, and including technology transfer....because of this letter, Mukesh Ambani cancelled the MOU with Dassault. Following this, Dassault approached Anil Ambani who approached the Respondent 1 here, whose name I shall not take. Subsequently, the Request For Proposal (RFP) was withdrawn....”

“In April, 2015, the Prime Minister gave the statement that 36 Rafale jets will be purchased....the opposition said that the purchase is not in adherence to the regulations and that the parliamentary committee has not been involved. The PM had cited the price for one fighter jet as Rs. 1700 crores, while Kuwait has purchased the same from Dassault for Rs. 700 crores....a no-confidence motion was moved in the parliament and it could not be justified if the cost will also include the weapons attached....”

However, when the Counsel started on “what we are becoming in the eyes of foreigner by branding our PM as a thief”, Chief Justice Gogoi cut across him, sternly noting that if advocates digress from the issue, they will not be heard.

When the Counsel for Congress Leader Tehseen Poonawalla sought permission to withdraw his PIL, the Chief Justice peremptorily dismissed it.

The PIL filed by lawyer Vineet Dhanda seeks a direction to the Centre to reveal details of the deal and the comparative prices during the UPA and NDA rule in a sealed cover to the apex court.

The petition also requests for information about the contract given to Reliance by Dassault. The petition terms the allegations against the deal as “frivolous”, and states that “critics in the opposition parties have adopted a very ignominious and profligate way even to criticise the Prime Minister”. Dhanda says in his petition that this sort of criticism will send a “wrong signal about India to the world”, and hence it was necessary to clear the air regarding the deal.

Advocate M L Sharma’s plea, filed earlier, alleging discrepancies in the fighter jet deal with France and seeking a stay on it also came up for hearing.

A similar plea was filed in the apex court in March this year seeking an independent probe into the Rafale deal and disclosure of the cost involved in the deal before Parliament.

The plea, filed by Congress leader Tehseen S Poonawalla, had sought a direction against the Centre on why the Union Cabinet’s approval was not sought as part of the Defence Procurement Procedure (DPP) before signing the procurement deal with France on September 23, 2016.

Rafale deal is a defence agreement signed between the governments of India and France for the purchase of 36 Rafale fighter aircrafts in a fly-away condition as a part of the upgrading process of Indian Air Force equipment.

Indian Air Force had advanced a proposal to buy 126 fighter aircraft in August 2007 and floated a tender. Following this, an invitation was sent to various aviation companies to participate in the bidding process.