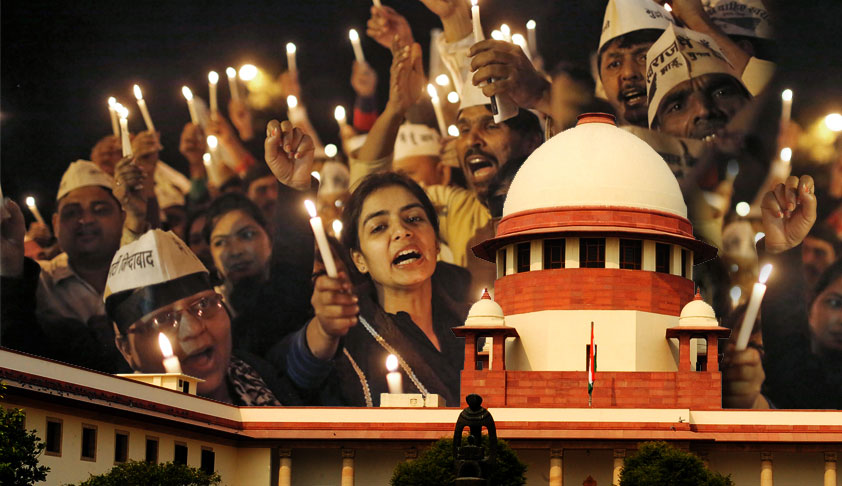 A Three-Judge Bench of Chief Justice Dipak Misra and Justices R Banumati and Ashok Bhushan has dismissed the review petitions filed by death row convicts in the 2012 Nirbhaya gangrape case and upheld the death penalty awarded to them."there is no error apparent upon the face of the record", said the bench. Sitting in appeal, the Supreme Court had in May, 2017 refused to attach any weight to...

A Three-Judge Bench of Chief Justice Dipak Misra and Justices R Banumati and Ashok Bhushan has dismissed the review petitions filed by death row convicts in the 2012 Nirbhaya gangrape case and upheld the death penalty awarded to them.

"there is no error apparent upon the face of the record", said the bench.

Sitting in appeal, the Supreme Court had in May, 2017 refused to attach any weight to the defence objections of delay in filing of FIR, non-mentioning of assailants’ names in the FIR, credibility of the testimony of the informant or the alleged tampering of the CCTV footage. The submission regarding non-compliance with the provisions of sections 235(2) and 354(3) of Cr. P. C. also had not influenced the judgment.

The top court had also declined to take into consideration mitigating factors such as young age, poor and rural background, family circumstances, lack of criminal antecedents and good conduct in prison of the convicts to commute the death sentence to life imprisonment, observing, “The accused may not be hardened criminals; but the cruel manner in which the gang-rape was committed in the moving bus; iron rods were inserted in the private parts of the victim; and the coldness with which both the victims were thrown naked in cold wintery night of December, shocks the collective conscience of the society. The present case clearly comes within the category of ‘rarest of rare case’ where the question of any other punishment is ‘unquestionably foreclosed’. If at all there is a case warranting award of death sentence, it is the present case.”

On 13th September 2013, the Additional Sessions Judge, Saket District Court Complex, finding the accused guilty under, inter alia, sections 365-366, 376(2)(g), 377, 302 and 307 of the IPC read with its section 120 B had ordered them to be hanged till death. The said order was upheld by the Delhi High Court in appeal by judgment dated 13th March 2014 and thereafter by the Supreme Court

On November 13 last year, A Supreme Court bench of Chief Justice Dipak Misra and Justices R. Banumathi and Ashok Bhushan had heard the review petition against the judgment dated 5th May, 2017 of the court upholding the death sentence awarded by the Delhi High Court in the 2012 Nirbhaya gangrape case.

The review petition filed on behalf of convict Mukesh Kumar, challenging the impugned judgment on the ground that the aforesaid convict is falsely implicated and that he was not present at the crime scene at the time of the unfortunate incident on 16th December 2012.

Advocate Mr. M. L. Sharma, appearing for Mukesh Kumar, requested the bench to reconsider the imposition of capital punishment on his client, contending, “The disclosure statements for the purpose of section 21 of the Indian Evidence Act, 1872 are tainted with custodial torture in respect of which a writ petition was also filed by Mukesh before the Delhi High Court. There are a plethora of judgements since Sunil Batra v. Delhi Administration [1980 SCR (2) 557] whereunder the admissibility of evidence obtained through illegal means is discussed.”

He also relied on the special police diary containing dying declaration dated 21st December, 2012 of the victim recorded by the Investigating Officer wherein the name of Mukesh does not appear.

Further, he referred to the mobile phone recovered from the person of Mukesh Kumar from which a call was made at 8:54 PM on the night of the crime to co-accused Ram Singh (since deceased), emphasising that the testimony of neither the prosecutrix nor the informant mentions boarding of the bus wherein the crime is alleged to be committed by Mukesh thereafter.

Lastly, the driver’s license recovered from Mukesh pertains to two-wheeler vehicles and not heavy vehicles like the bus which Mukesh is alleged to have driven during the commission of the crime.

Subsequently, on December 12, 2017, SPP Siddharth Luthra had submitted that the issues raised by Advocate Sharma, have already been considered by the trial court, affirmed by the Delhi High Court and finally by the apex court sitting as a court of appeal.

With regard to allegations of custodial torture, Mr. Luthra argued that Mukesh was held in judicial custody and not in the custody of the Investigating Officer. Further, no mention of any torture had been made during the course of the trial.

Mr. Sharma had also contended that the police had forcibly procured vakalatnamah from the present petitioner in violation of Article 22 of the Constitution. Mr. Luthra submitted that the trial court records in the matter are replete with instances of serious misconduct and “behaviour unbecoming of a lawyer” and hence, the court was compelled to appoint an amicus curiae.

In respect of the argument that the disclosure statement dated December 18, 2012 was illegally obtained under threat and coercion, Mr. Luthra cited the Supreme Court judgement in Pooran Mal v. Director of Inspection (Investigation) of Income Tax [(1974) 1 SCC 345] in so far as it was held therein that even irregularly procured evidence is admissible if the same is deemed relevant.

In respect of the police diary containing dying declaration of the victim dated December 21, 2012 recorded by the Investigating Officer wherein the name of Mukesh was not mentioned, the Senior Advocate submitted that by virtue of section 172 of the Cr. P.C., the same cannot be relied upon.

Finally, Mr. Luthra submitted that the initial arrest was made at Delhi and not Karoli, Rajasthan as contended by Mr. Sharma and that within 24 hours of the arrest, Mukesh had been produced before a magistrate. The Investigating Officer, in the preliminary enquiry, had recorded two sets of articles obtained from two places which were confirmed, firstly, by disclosure and subsequently, under-recovery for the purpose of section 27 of the Indian Evidence Act of 1872.

In addition, Mr. Sharma had brought to the attention of the bench the possibility of tampering at the end of the police with the parcel dispatched to the Central Forensic Science Laboratory, CBI. Chief Justice Misra assured the Advocate that the issue shall be addressed.