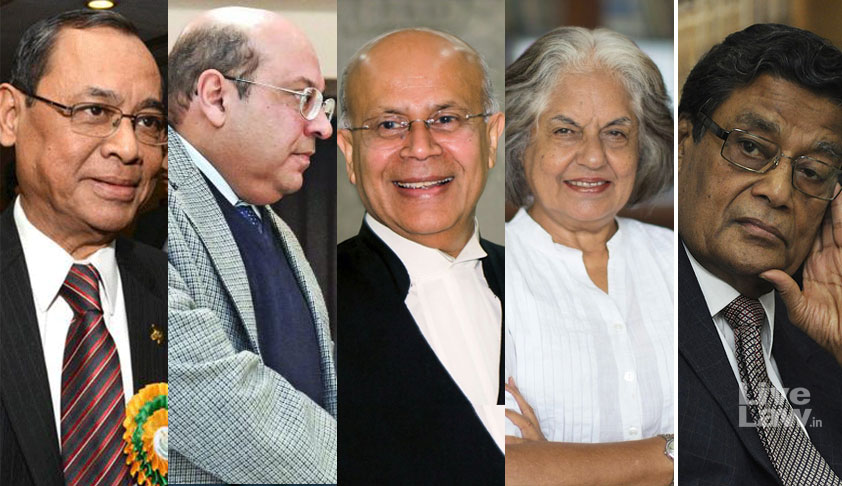 In a major effort to streamline and bring in transparency into the process of designating advocates as "seniors", the Supreme Court today said henceforth all matters relating to it will be dealt preliminarily by a committee headed by the Chief Justice .The two senior most judges and the Attorney General will be part of the committee which will choose a fifth member --from the Bar.Justice...

In a major effort to streamline and bring in transparency into the process of designating advocates as "seniors", the Supreme Court today said henceforth all matters relating to it will be dealt preliminarily by a committee headed by the Chief Justice .

The two senior most judges and the Attorney General will be part of the committee which will choose a fifth member --from the Bar.

---The Committee will be called Committee For Designation Of Seniors.

---The Committee will have a Secretariat

-- Number of reported judgments, Number of years of practice, personality and suitability will be the chief criteria.

-- After all compilation and data collected it will then go to the Full Court for consideration through secret ballot or majority view.

---The cases not considered in first round will be taken up again only after two years.

"THIS PATTERN TO GOVERN SENIOR DESIGNATION IN ALL HCs TOO"
Reading out the operative part, Justice Gogoi  said they had gone into some history, jurisprudence-- Roman, medieval, Queens Council and the initial pattern in India patterned on English model and the prevailing practice in High Courts.
"This pattern of selection will henceforth govern designation in SC and all High Courts too",Justice Gogoi said

The bench of Justices Ranjan Gogoi, R F Nariman and Navin Sinha was delivering its judgment on a petition filed by senior lawyer and former Additional Solicitor General Indira Jaising seeking transparency and overhauling in the "opaque system" of designating lawyers as senior advocates. She said the current process was discriminatory and required to be discarded.

"There should be deemed designation for law officers and retired judges as it is believed that senior advocates get preferential treatment in the court. The new system should consider various aspects, including integrity, pro bono work, expertise in specialised areas of law among other," she had argued adding that the entire process needed to be democratized, closed door decisions stopped.

Jaising said in the United States, there are no senior or junior tags on lawyers and the practice was prevalent only in Commonwealth nations.

On January 2, the apex court had decided to hear afresh a plea seeking transparency and overhauling in the "opaque system" of designating lawyers as senior advocates.

SC had virtually put the process of designation of lawyers as seniors on hold since two years pendingJaising’s petition.

Jaising while discussing the "discrimination" faced by other lawyers on this account also said "seniors get a more patient hearing too from the judges and this was wrong".

JAISING GAVE UP HER ‘SENIOR’S’ GOWN

Noting that even a separate dress was discriminatory, she had given up the senior gown while the matter was pending in the court.

After her tweet announcing it , when Live Law asked her the reason behind her sudden decision, she said:

“When I was arguing this case (senior designations) in the Supreme Court, I cited the case of Balaji which deals with conferring of Padmashrees. That was challenged in the Supreme Court and the Supreme Court said that the Government must come up with guidelines for the conferring this award. Now, the Affidavit filed by the Supreme Court  in senior designation says that the designation as’Senior Counsel’ is an honour. Similarly, the conferring of Padmashree is also an honor. The Supreme Court said that you can't use the word Padmashree as a prefix or suffix with your name because it violates the rule of equality. You can't have two classes of people, those with Padmashree and those without Padmashree, so you can't write that in your name. So I made a submission to the Court, that similarly, even when you designate a senior, they can't say Senior Counsel and they can't wear a different gown. If you read the Bar Council Rules, there is no distinction between the gown of a senior and a junior. So they have adopted the whole senior gown only because of the British”.

“So, that is why, because I myself argued this in the Court, therefore, I want to act according to what I have submitted in the Court. So I have decided that from 15th on wards, I won't. 15th is independence day, so you can call it independence from the British”.

Attorney General K K Venugopal who was requested to assist the court on the sensitive issue had argued that designation of senior advocates cannot be termed bad in law and it does not violate Article 14 of Constitution.

He said classification between lawyers is being done on the basis of various parameters like standing at bar, knowledge of law, integrity. He said that designation was not only for monetary benefits, but helps a litigant to make an informed choice.

Gujarat High Court Bar Association had also joined the arguments against the practice of designating senior advocates, saying none of the pre-constitutional laws had a division of laywers in senior and junior categories.