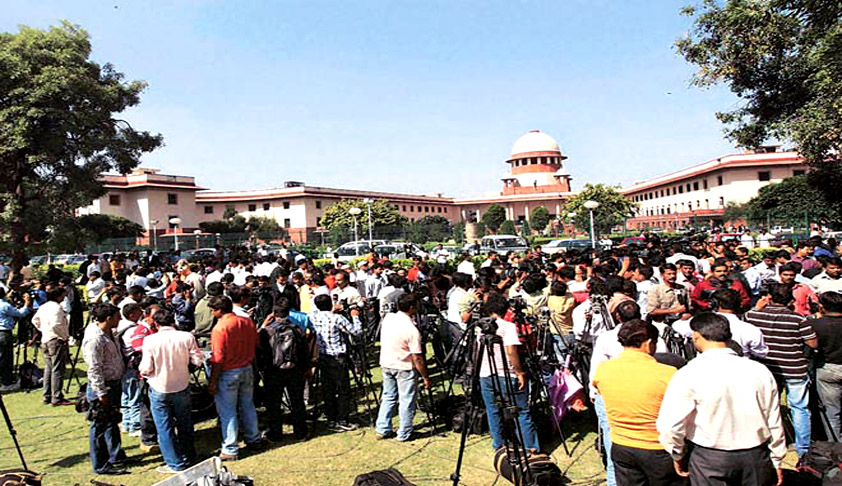 Journalists who are desirous to report Court proceedings in Supreme Court of India will now require a Law degree, as a circular to that effect has been issued. The norms for temporary and regular accreditation says that one must have a Law degree recognized by the Bar Council of India under the Advocate Act. Circular says that these revised norms were approved on 19th August, 2015. Though most of the norms were part of an old circular dated 3.1.2007, that were not strictly enforced.

The norms for regular accreditation also reads that “He should ordinarily have five years’ Court reporting experience in a daily newspaper and/or a national or international news agency or electronic Media Organization of which at least three and a half  years must be at Supreme Court or at any High Court(s) in India.“ .Identity cards will be issued to the accredited journalists/correspondents. For temporary accreditation, only three and a half years’ experience is required, of which two years should be from High Courts, but however Law degree is requirement in both type of accreditation.

The revised norms also require the correspondents to be in formal dress in court premises and should prominently display his accreditation ID card. It also asks them to maintain decorum in court. It adds that the correspondent should make a serious endeavour of reporting a faithful account without any distortions and embellishments.

The circular also says that the accreditation can be withdrawn, at any time, without assigning any reasons.

Last week Justice Ranjan Gogoi directed legal journalists in the apex court to observe restraint while reporting the exchange between the judges and lawyers.

Noting that reporter’s should remain at arm’s length and in their designated space within courtrooms, Justice Gogoi said the Supreme Court’s Press Accreditation panel has decided against journalists entering the ‘Well’ – the space between the arguing counsel and the elevated dais of the sitting judges – in the courtroom.

The judge was about to dictate the order in a case concerning three percent reservation for disabled persons when he turned to a journalist standing near the dais and went about to ask him his name and the organisation he worked for.

“Don’t rush to the Well,” Justice  Gogoi said. When the journalist concerned retreated, Justice Gogoi jovially called to him to not do so and stay on. “May be, the decision of accreditation committee has not reached you. You should be at your place,” the judge said.

The bench, which also comprised Justice N.V. Ramana, raised objections about the reporting of oral to-and-fro between judges and lawyers during the hearing of a case.

“Most of the judges do not like to be quoted about their observations made during a debate. In the course of the debate, we make certain tentative observations. We say without mincing words,” it said.

The court later told scribes: “You are most welcome so long as your reporting is accurate.”