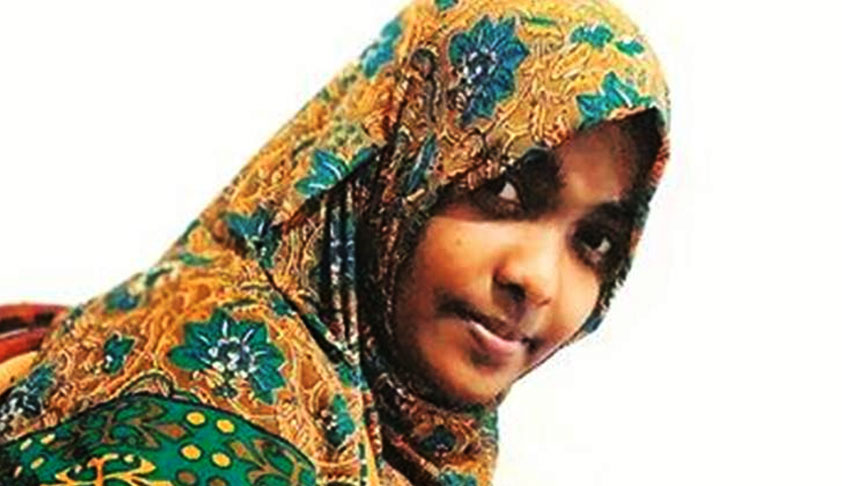 In a major development in the sensational Hadiya case, the Supreme Court today directed that hadiya shall be produced before it to ascertain if she, an adult, had married Shafin Jahan out of her own free will after her conversion.Ashokan, the father of the 24 year old woman has been asked to produce the girl at 3pm on November 27.The order by a bench headed by Chief Justice Dipak Misra was...

In a major development in the sensational Hadiya case, the Supreme Court today directed that hadiya shall be produced before it to ascertain if she, an adult, had married Shafin Jahan out of her own free will after her conversion.

Ashokan, the father of the 24 year old woman has been asked to produce the girl at 3pm on November 27.

The order by a bench headed by Chief Justice Dipak Misra was given despite stiff objection by Additional Solicitor General Maninder Singh who appeared for Centre and Shyam Divan who represented the woman's father who has the custody of the girl now after the Kerala High Court quashed the marriage and gave her custody to him.

Both of them had argued that "indoctrination and psychological influence  are exceptions to consent' but the bench said all these issues will be dealt with later.

During the hearing the Chief Justice, in a lighter vein  also questioned if "there is any rule in law that a girl cannot fall in love and marry a criminal"

"We are inclined to modify the order dated 16th August and is directing the presence of the daughter of the 1st respondent at 3PM on 27th November. We may further add that this court shall speak to her not in-camera but in open court"

"We will be failing in our duty if we do not take on record the submission of ASG Maninder Singh and Senior Advocate Shyam Divan that in a case of present nature when there is sufficient material on record and a pattern of indoctrination the choice of the person may not be treated as absolute".

On October 9 the Supreme Court had adjourned the hearing amidst commotion but not before reiterating that prima-facie he felt that her father cannot be given the custody of the adult girl.

The bench was upset after Senior Advocate Dushyant Dave tried to explain that the Centre tried to give a political twist to the whole issue and how BJP President Amit Shah and UP CM Yogi Adityanath tried to cash in on "love jihad" issue during their Kerala Janaraksha Yatra.

"We cannot hear you today but on another day when you all will just stick to legal principles and law", CJI Misra had told Dave, ASG Maninder Singh and all other lawyers.

At one stage an angry CJI also told Dave that "you have bulldozed your case with your own argument".

Before rising, CJI Misra however said: "the basic principle is ..legal principle..when two adults marry a court cannot interfere and such a custody to father can only be given if the person is mentally handicapped , psychologically depressed etc...I think she should be allowed to go wherever she wants".

Hinting that the girl will be summoned soon, the bench had said: "in a habeus corpus petition we will not abdicate our responsibility to interview the girl"

It is to be noted that the state government had told the apex court in an affidavit that investigation by the state police in the matter had not found anything that would warrant a probe by the Central agency.

“Investigation conducted so far by the Kerala police has not revealed any incident relating to commission of any Scheduled Offences to make a report to the Central Government under Section 6 of the National Investigation Agency Act, 2006”, it said.

Three applications have also been filed demanding the Applicants’ impleadment as respondents in the Hadiya case and seeking an investigation by the National Investigation Agency into incidents of alleged ‘Love Jihad’. They have been filed by Kerala-based Bindu, mother of a girl who was a “victim” and one Maharashtra-based Sumathi Arya who claimed to be a victim.

In a fresh Application, Asokan K.M, Hadiya’s father, has claimed that Shafin Jahan, has “a radical mind set with links to terrorist organization”.Meanwhile Shafin Jahan, the petitioner filed a Contempt Petition against NIA As per the office report in the case NIA has filed some investigation reports before the Court. During the last hearing Senior Advocat During the last hearing Senior Advocate Dushyant Dave submitted that the NIA investigation in this case is illegal since the Supreme Court had ordered the investigation under the supervision of former Supreme Court Judge Justice RV Raveendran. However Justice Ravindran declined the request citing personal reasons. In such circumstances the NIA investigation in the case is against the August 16 order of the Supreme Court.

On October three the sensational case took an altogether new twist with the CJI-led bench making it clear that a 25 year old girl, an adult, cannot be held hostage by her father against her wishes and the CJI-led bench categorically stating it will examine if a High Court under Article 226 can quash a marriage.