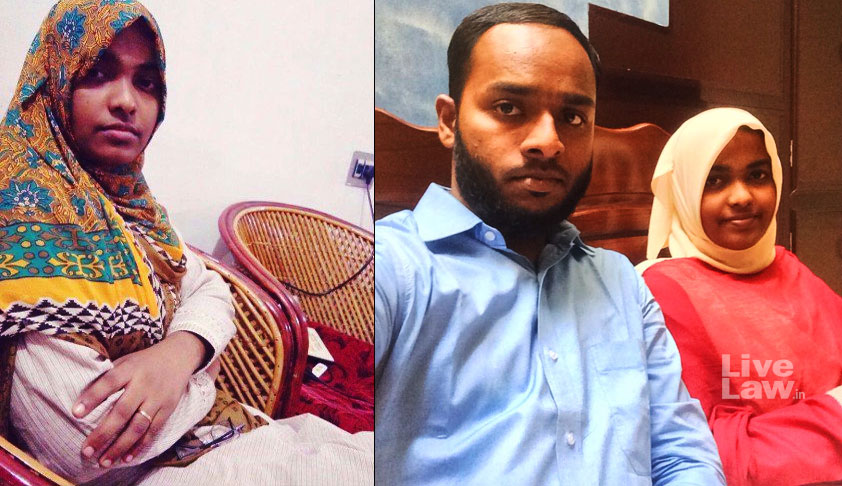 In a major development in Hadiya case, the Supreme Court today freed her from the clutches of her parents who according to her had kept her in "unlawful custody" for 11 months.A bench headed by Chief Justice Dipak Misra ordered that she be sent "at the earliest" to Sivaraj Homeo Medical College Salem  to complete her house surgency.Kerala government has been asked to make all arrangements....

In a major development in Hadiya case, the Supreme Court today freed her from the clutches of her parents who according to her had kept her in "unlawful custody" for 11 months.

A bench headed by Chief Justice Dipak Misra ordered that she be sent "at the earliest" to Sivaraj Homeo Medical College Salem  to complete her house surgency.

Kerala government has been asked to make all arrangements. The Court has given direction to the Dean of the college  for her protection and hostel facilities.

The Supreme Court bench of Chief Justice Dipak Misra and Justices D. Y. Chandrachud and A. M. Khanwilkar resumed the hearing at 3pm Today, on the Special Leave Petition instituted by Shafin Jahan, against the Kerala High court judgment nullifying his marriage and admitting her to the custody of her parents.

Senior advocate Shyam Diwan, appearing on behalf of Hadiya’s father, moved an application before the court to revisit its earlier order dated October 30 regarding holding proceedings pertaining to the present matter in open court.

The top court passed a direction to the effect that Hadiya pursue her education at the Sivaraj Homeopathic Medical College in Tamil Nadu, where she shall avail of the hostel facility.

Diwan contented that the views of Hadiya have been recorded earlier on affidavit as well as by way of her oral submissions to the Kerala High Court in the earlier writ petition.

When the apex court desires to speak to her, it is clear that some amount of probing and inquiring will be involved. Further, it was advanced that the matter has acquired a strong communal colour on account of the involvement of a syndicate engaged in the conversion of women to Islam. In view of the same, he suggested that proceedings be held in camera.

In addition, senior counsel submitted before the top court a transcript of a voice clip of one Abdul Rasheed, an ISIS recruiter, in evidence of his association with the Popular Front of India, the Islamic fundamentalist organisation with which the present petitioner is alleged to be connected.

Further, an affidavit of one Sainaba, associated with Sathya Sarani, an institute imparting religious education and assistance to neo-converts, who has admitted to being the guardian of Hadiya, and allegedly aiding in her indoctrination and arranging her marriage was submitted.

Diwan contended that the said organisation masquerades as a cultural body, but is in fact aimed at bringing about conversions to Islam. Finally, the senior advocate placed before the bench evidence of exchange of conversation on Facebook between one Mansi Buraq, recently arrested by the National Investigation Agency (NIA), and the present petitioner before the apex court, Shafin Jahan, wherein the latter is inquiring about the price for recruiting persons to the ISIS.

Additional Solicitor General (ASG) Maninder Singh, appearing for the NIA, strongly insisted that the bench peruse the report filed by the NIA which would “completely demolish the foundation of the marriage dated December 19, 2016”.

The ASG also submitted that there are 10 other identical cases of indoctrination and “neuro-linguistic programming” of women wherein investigation by the NIA has been directed by the Kerala High Court, of which seven women were in the custody of Sainaba.

Justice Chandrachud sought to know from senior counsel Kapil Sibal, representing the present petitioner, “What would be the guiding principles for the court to determine if the autonomy of an adult has been compromised? And if we proceed with interviewing the girl in question, would that not amount to the court accepting that there has been no indoctrination and that she had consented to converting to Islam for the marriage with her free consent, in a competent state of mind?”

Sibal remarked, “I am saddened that in place of letting the autonomous adult, Hadiya, voice her opinion on the entire issue, the Court is attaching more significance to the investigation report on her psychological brainwashing and the syndicate responsible for such conversions. The first step would be to interview the girl in open court and not in camera”.

“The NIA makes U-turns in all prosecution,” added Sibal on a humorous note.

On Monday, Hadiya submitted before the Supreme Court, that she wants her freedom and that she wishes to continue her education, but not at the state’s expenses, as her husband is capable of taking care of her.

She further stated, “I have been in unlawful custody for 11 months and have suffered mental harassment. I want to go back to my husband and be true to my faith.”