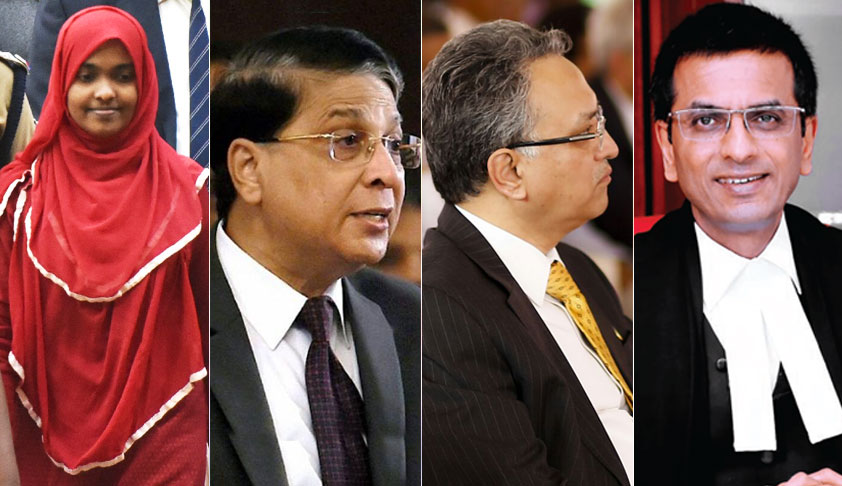 The Supreme Court has set aside the Kerala High Court judgment annulling the marriage between Hadiya and Shafin Jahan- a marriage which was debated throughout the country during the past few months.The Apex Court quashed the High Court judgment in view of Hadiya's statement during her personal appearance before the Court in November, 2017, and opined that the High Court could not have...

The Supreme Court has set aside the Kerala High Court judgment annulling the marriage between Hadiya and Shafin Jahan- a marriage which was debated throughout the country during the past few months.

The Apex Court quashed the High Court judgment in view of Hadiya's statement during her personal appearance before the Court in November, 2017, and opined that the High Court could not have annulled the marriage under Article 226 of the Constitution of India. It, however, directed the National Investigation Agency (NIA) to continue with its investigation.

"Considering the arguments advanced on both sides, in the facts of the present case, we hold that the High Court should not have annulled the marriage between Shafin Jahan and Hadiya alias Akhila Asokan, in a Habeas Corpus petition under Article 226 of the Constitution of India. We say so because in the present appeal, by special leave, we had directed the personal presence of Hadiya alias Akhila Asokan; she appeared before this Court on 27th November, 2017, and admitted her marriage with appellant No.1.
In view of the aforesaid, the appeal stands allowed. The judgment and order passed by the High Court is set aside. Hadiya alias Akhila Asokan is at liberty to pursue her future endeavours according to law. We clarify that the investigations by the NIA in respect of any matter of criminality may continue in accordance with law"

The case concerns Hadiya’s conversion to Islam and her subsequent marriage to a Muslim man Shafin Jahan. In a judgment rendered on 25 May last year, a Division Bench of Kerala High Court had called her marriage a “sham”, and had annulled it, directing her return to the protective custody of her Hindu parents.

A Bench comprising Chief Justice J.S. Khehar and Justice D.Y. Chandrachud had thereafter directed the National Investigation Agency (NIA) and the Kerala Government to submit all documents related to the case. It had also directed Hadiya’s father Asokan to submit proof of his claim that Hadiya was converted after being radicalized. Soon after, the Apex Court had directed an NIA probe into the case, under the supervision of former Supreme Court Judge, Justice R.V. Raveendran.

Justice Raveendran had, however, declined the Court's request, after which, Hadiya’s husband had approached the Apex Court, seeking recall of the order directing NIA probe into the matter. He had filed an application contending that “certain facts have emerged which call for a reconsideration” of the order.

He had further submitted that the Agency had begun investigating the matter despite Justice Raveendran's refusal to head the probe. This, he had said, violated the Court's order. There have been several allegations and counter-allegations since.

In November, when the Court finally heard Hadiya, it directed her to be sent “at the earliest” to Sivaraj Homeo Medical College, Salem  to complete her house surgency. The Kerala Government was asked to make all arrangements and the Dean of the college was directed to ensure her protection.

Hadiya had then, last month, sought the Court's permission to live with Shafin Jahan as husband and wife. In her affidavit, Hadiya had categorically stated that she had embraced Islam and married Shafin Jahan on her own free will.

“I embraced the faith/religion of Islam on my choice as per my conscience and on my own free will after studying about Islam and thereafter I married a person, namely Shafin Jahan, the Petitioner herein, from the same faith as per my choice and on my own free will. However, despite the fact that I submitted repeatedly on affidavit, through my counsel and also in person, as the case may be, before the Hon’ble High Court of Kerala that I made the above choices (of my religion and my life-partner) on my own free will, the Bench of the High Court did not heed to my submissions,” she had submitted.

Hadiya's father, Asokan K.M. had then presented a new conspiracy theory, alleging that attempts had been made to take Hadiya to Yemen. Mr. Asokan had pointed out that Hadiya has not denied any of these allegations of transporting her out of the country and had also cited other examples where people have been taken out of India. Thereafter, he had specifically emphasized on Hadiya being "vulnerable" and had demanded dismissal of the SLP.

You may read: The Jurisprudential Conundrum Of Hadiya Case by Vaibhav S. Charalwar