Breaking; ‘There is something rotten in the State of Medical Colleges’ SC imposes 5 Cr Cost on KIMS for playing with future of students [Read Judgment] 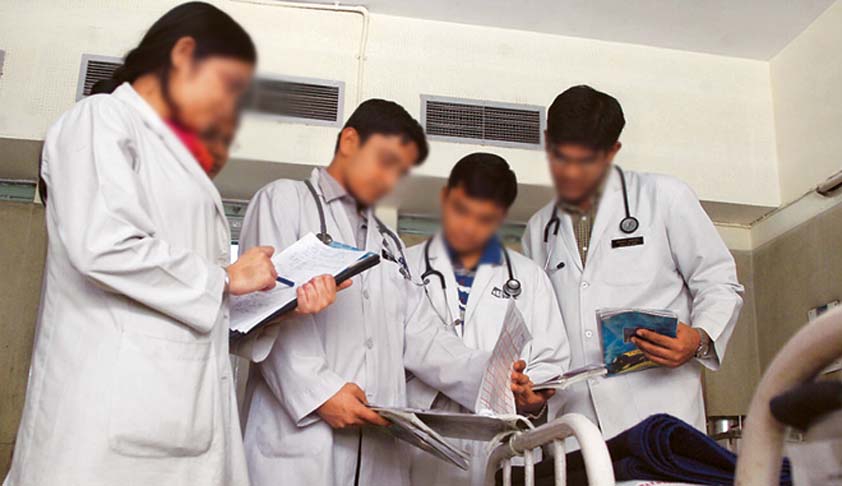 Quality in medical education is equally important, if not more, than quantity, the Bench remarked.

The Supreme Court, coming down heavily on Kalinga Institute of Medical Sciences (KIMS) for venturing adventurist litigation and playing with future of students, has directed the Medical council of India to restrain it from increasing the intake of students from 100 students to 150 students for thecourse for the academic year 2016-17 and 2017-2018.

The Apex Court bench comprising of Justices Madan B. Lokur and N.V. Ramana has also imposed costs of Rs. 5 crores are imposed on KIMS for playing with the future of its students and the mess that it has created for them. The Court also observed that the High Court should have been more circumspect in passing interim orders directing the admission of students.The Court has also directed the MCI and Central Government to prepare a Standard Operating Procedure for conducting an inspection as required by the Medical Council of India Establishment of Medical College Regulations, 1999.

The chronological events which lead to this judgment by Apex Court is as follows.

The Apex Court made the following observations disposing of the appeal filed before it by Medical Council of India.

HC SHOULD HAVE BEEN MORE CAUTIOUS WHILE DIRECTING ADMISSION OF STUDENTS

The Apex Court observed that High Court ought to have been more circumspect in directing the admission of students by its order directing Central Government to grant provisional permission to KIMS to conduct the course for the additional 50 students in the academic year 2015-16.The Court observed as follows

“There was no need for the High Court to rush into an area that the MCI feared to tread.Granting admission to students in an educational institution when there is aserious doubt whether admission should at all be granted is not a matter to be taken lightly. First of all the career of a student is involved – what would a student do if his admission is found to be illegal or is quashed? Is it not a huge waste of time for him or her? Is it enough to say that the student will not claim any equity in his or her favour? Is it enough for student to be told that his or her admission is subject to the outcome of a pending litigation? These are all questions that arise and for which there is no easy answer. Generally speaking, it is better to err on the side of caution and deny admission to a student rather than have the sword of Damocles hanging over him or her. There would at least be some certainty.”

‘THERE IS SOMETHING ROTTEN IN THE STATE OF MEDICAL COLLEGES’

The Judgment begins by expressing concern about state of medical colleges. The court observes

Undoubtedly, there is something rotten in the state of medical colleges. Unless the concerned Ministries in the Government of India take a far more proactive role in ensuring that medical colleges have all the necessary facilities, clinical materials, teaching faculty, staff, accommodation etc. the health of the people of our country will take a hit in the coming years due to inadequately educated doctors. Quality in medical education is equally important, if not more, than quantity.

Quashing the Judgment of High Court and criticising it for setting aside the report of inspection team and for not appreciating that the inspection was carried out by eminent Professors from reputed medical institutions who were experts in the field and the best persons to give an unbiased report on the facilities in KIMS, the Court said:

“Medical education must be taken very seriously and when an expert body certifies that the facilities in a medical college are inadequate, the Courts are not equipped to take a different view in the matter except for very cogent jurisdictional reasons such as mala fides of the Inspection Team, ex facie perversity in the inspection report, jurisdictional error on the part of the MCI etc. Under no circumstance should the High Court examine the report as an appellate body – this is simply not the function of the High Court. In the present case there was no ground made out at law for setting aside the report of the Inspection Team.”

KIMS JEOPARDISED CAREER OF STUDENTS BY VENTURING INTO ADVENTORIST LITIGATION

Rejecting the submission of KIMS that unless this appeal by MCI is dismissed it will result in the students suffering a loss of two years of their studies, the court observed:

“This may be so – but if such a situation has come to pass, KIMS is entirely to be blamed. KIMS was specifically told not to admit students by the Central Government in its letter dated 15th June, 2015. Despite this KIMS persisted in litigation to somehow or the other accommodate 50 additional students. This was certainly not with a charitable motive. As an institution that should have some responsibility towards the welfare of the students, it would have been far more appropriate for KIMS to have refrained from giving admission to 50 additional students rather than being instrumental in jeopardizing their career.”

Disposing of the appeal by observing that for the fault of KIMS, the students should not suffer ANDKIMS should not get away scot free, the Court issued following directions

‘PREPARE A STANDARD OPERATING PROCEDURE FOR CONDUCTING AN INSPECTION’

Observing that there is no fixed, set or laid down procedure prepared by the MCI for conducting an inspection or assessment as postulated by the Medical Council of India Establishment of Medical College Regulations, 1999, the Court further directed MCI and Central Government as follows