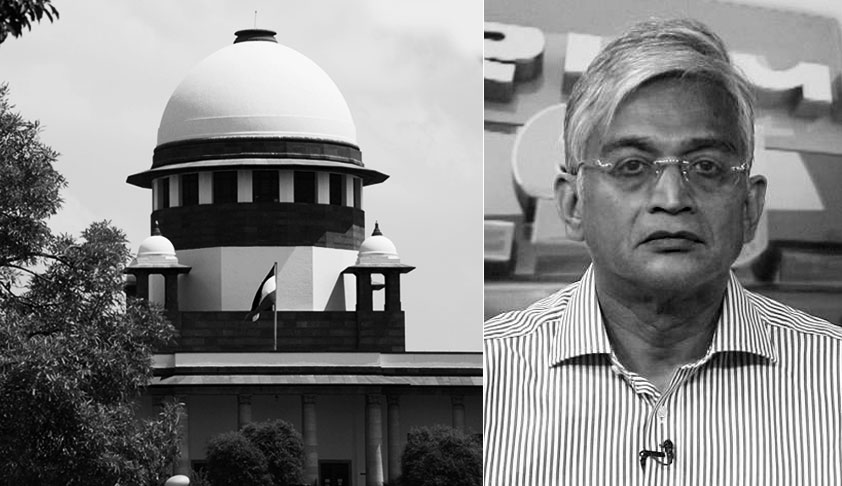 Unprecedented are the happenings in the Supreme Court in the recent past. It seems that the new jurisprudence is in the offering, where the bar and the bench are contributing to shaking faith in the judiciary. Something unwarranted witnessed the Chief Justice Court on Monday, which in ordinary course merits dismissal with exemplary cost.  However, surprisingly it ended in uproar by few...

Unprecedented are the happenings in the Supreme Court in the recent past. It seems that the new jurisprudence is in the offering, where the bar and the bench are contributing to shaking faith in the judiciary. Something unwarranted witnessed the Chief Justice Court on Monday, which in ordinary course merits dismissal with exemplary cost.  However, surprisingly it ended in uproar by few regular practitioners, and thereafter business as usual.

These days, conscience is a word used in the Court Rooms more frequently and yet good conscience seems to be playing hide and seek.

The lawyers assembled in court room of Chief Justice of India had the rare opportunity of witnessing a Senior Counsel submitting in the court, contrary to the pleadings on the affidavit by the petitioner and the prayer made thereunder. It seemed the Senior Counsel travelling beyond the pleadings ‘turning hostile’ by eating up his own prayer in the Writ Petition. The uncanny submissions unsupported by the pleadings on record was executed by Senior Advocate Pallav Shishodia in the writ petition filed seeking independent inquiry into the death of Judge Loya.

The writ petition W.P.(C) No.-20-/2018 (Banduraj Sambhaji Lone v. Union of India  ) filed by a Bombay based journalist through Adv. Anita Shenoy on 11th January 2018 specifically prays for issue of  mandamus/appropriate orders/directions for independent inquiry into the death of Judge Loya and for fair and impartial investigation. The grounds put forth in the petition lists out the reasons why suspicion surrounds the death of Judge Loya and why the petitioner seeks an independent probe.  The suspicions are raised on the basis of the contradictory reports by different media, electronic and print. The prayers in the writ petition are as follows :

“A) Issue writ of mandamus or any other appropriate writ, order or direction to the respondents to conduct an independent enquiry/probe into the death of Sri Judge Loya “

B) Issue a writ of mandamus or any other appropriate writ, order or directions to the respondents to conduct a fair and impartial investigation/ enquiry” Despite all the contentions and prayers in the Writ Petitions for an independent probe, Senior Counsel representing the petitioner Mr. Pallav Shishodia, assisted by Adv. Anita Shenoy curiously took a U-turn and argued that the grounds mentioned in the writ petition that he represents, are based on flimsy media reports alone which are mere hearsay evidence. He vehemently submitted to the court that “however outlandish such allegations may sound they also need to be dealt with appropriately.” It is beyond reasonable comprehension as to what exactly is meant by this submission. The petitioner puts allegations and prays for independent probe in the first place, and in less than a month’s time, during the course of hearing, finds his own prayers as flimsy; he does not attempt to amend or withdraw the petition; and asks for “appropriate action on the allegations.” Is this a de novo prayer called “no-prayer”?  If that be the case why the petition was filed ?

Mr. Shishodia seems to have been woken up by “one eminent press conference” and suddenly is “concerned” about the accountability of those who raise allegations. His written submission states that;

“The present writ proceedings also appear to have found resonance in one eminent press conference as also led to open aspersions cast on the some of the judges of this Hon’ble Court hearing the matter. In the circumstances, it is submitted that an independent probe cannot be one way traffic in which persons making allegations can just “hit and run” without any responsibility to damages caused to the reputation, prestige and faith in institutions including this Honorable Court and judiciary as a whole ”

Strangely enough the Senior Counsel is questioning his own accountability, a generous and noble act indeed and says that allegations should not be like “hit and run”. And it is ironic that the counsel himself who hits and runs; he hits on the very nobility of the legal profession and runs away from his own prayers. The argument is neither black nor white; the counsel paints his own unique shade of arguments; astounding, amusing and absurd in one go. The written submissions that he had filed on 5th of February 2018 will prove a useful study material for students of law, on ambiguous documents. However it fails to educate the law students that at any stage of the proceedings, if the counsel as an officer of the court, comes to realise that the petition is having no merits, it is his duty tell the court in all fairness that either his petition requires withdrawal or amendment or else it amounts to abuse of the process of law. If not, the court ought to have enquired about the motive behind moving such dubious ambush petitions and wasting the time of the court. It was also the practice to dismiss such petitions with exemplary cost.

The submissions made by Mr Shishodia raise doubts on the very purpose of the writ petition. What could be the reason for filing the petition, if the same was intended to be disowned and contradicted in the garb of a sainthood self-bestowed by the senior lawyer who turns into an apostle for the reputation of the Supreme Court? Is it not reasonable enough for a close observer to wonder if it was not a petition bogus, aiming only at securing a seat amongst the petitioners, and play Judas from the petitioners’ desk. As Ms Indira Jaising, Sr Advocate remarked in Court that the nation too wants to know, “If Mr.Shishodia’s client did not want an enquiry, why was the petition filed?” As an evangelist of accountability and responsibility, a clarification is rightly due from Mr  Shishodia in the interest of reputation of the Bar at large.

And by taking such a stand in court, by changing one’s own arguments, the chapter of professional ethics is left to the conscience of individual members. All would have been looked decent, professional and non-oppressive if not for the moral outbursts of  Mr. Dave. No doubt, Mr.Dave’s moral high ground most often also ends up as wordily duel with judges. Mr.Shishodia’s  statements thrown at Mr. Dave, “that you go to heaven or hell” has  found the new ‘low’ in the court room hearings, finally compelling the Judge to compare  the court to a “fish market”.

When Mr. Dave had raised the issue of possible conflict of interest of Mr. Hrish Salve in the  Court on 22nd of January, since he had appeared for brother of murdered Sorabudhhen, then Mr.Amit Shah and now State of Maharashtra to argue against an independent investigation, Justice Chandrachud has asked the counsels to act as  per their conscience. And on 5th February, Mr. Dave again pointed out to the Court about the conflict of interest of Mr.Shishodia, who too had represented Mr. Amit Shah previously and presently representing a writ petition seeking independent probe on the death of Judge Loya, and who eventually put to ashes his own petition during arguments. This time Mr. Dave asked the Court to use its conscience and stop Mr. Shishodia and Mr.Salve from appearing in the case.

The outbursts and soliloquys from the lawyers in court on Day 2 of Judge Loya Death Case, is unfortunate. It is unfortunate that a lawyer like Mr. Dave was compelled by distress to say loud and clear that BCI was issuing notice to him for raising the voice of truth, while unethical voices get away with whatever they want.

In all circumstances, the court room is not meant to be “like a fish market” as remarked by Justice Chandrachud; Counsels need to maintain the decorum, and choose words, despite their conscience, if any. And conscience is not that bone that is buried and taken out to be savored as and when one wishes.

The word "conscience" is too lighter a term to be replaced for a meaningful rebuke.

Advocate Shishir Pinaki is practicing at Supreme Court of India