Can a Legislator facing Criminal Trial be disqualified at the time of Framing of Charge? Question referred to Constitution Bench 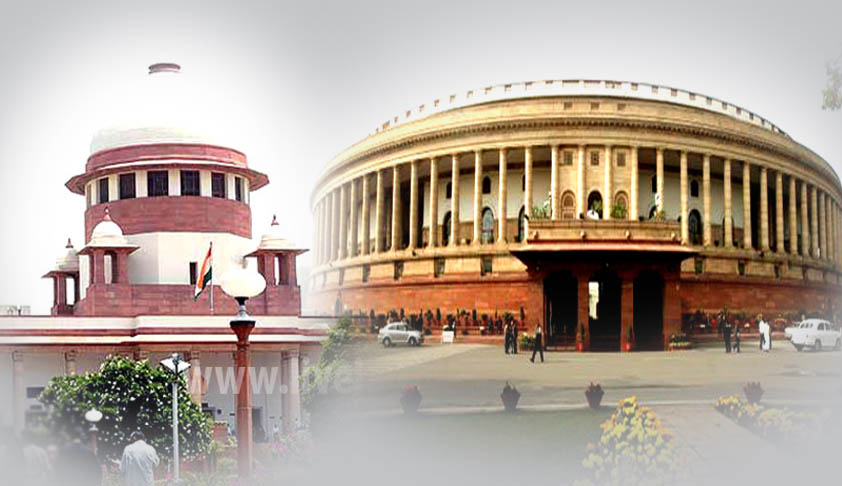 A Three Judge Bench of the Supreme Court of India in W.P. (Civil) No. 536 of 2011 titled Public Interest Foundation. v. Union of India referred the question ‘whether a legislator facing criminal trial should be disqualified at the very stage of framing of charges against him by the trial court? ‘to the consideration of Constitution Bench.The Court was hearing a Writ Petition filed by...

A Three Judge Bench of the Supreme Court of India in W.P. (Civil) No. 536 of 2011 titled Public Interest Foundation. v. Union of India referred the question ‘whether a legislator facing criminal trial should be disqualified at the very stage of framing of charges against him by the trial court? ‘to the consideration of Constitution Bench.

The Court was hearing a Writ Petition filed by Public Interest Foundation in 2011 praying inter alia for guidelines or framework to be laid down by the Court to deal with the menace of criminalization of politics and debar those charged with serious offences from contesting elections. The Supreme Court has, on 16th December, 2013, taken note of the Consultation Paper prepared and circulated by the Commission. Appreciating that the Commission may take some time for submitting a comprehensive report on all the aspects of electoral reforms, the Court in its order dated 16th December, 2013 petition, has observed that “the issues with regard to de-criminalization of politics and disqualification for filing false affidavits deserve priority and immediate consideration” and accordingly directed the Law Commission to “expedite consideration on the two issues, namely

(2) Whether filing of false affidavits under Section 125A of the Representation of People Act, 1951 should be a ground of disqualification? and, if yes, what mode and mechanism needs to be provided for adjudication on the veracity of the affidavit?

Law Commission of India in its 244th Report Titled 'Electoral Disqualifications’ answered the questions as follows;

1. Disqualification upon conviction has proved to be incapable of curbing the growing criminalisation of politics, owing to long delays in trials and rare convictions. The law needs to evolve to pose an effective deterrence, and to prevent subversion of the process of justice.

2. The filing of the police report under Section 173 Cr.PC is not an appropriate stage to introduce electoral disqualifications owing to the lack of sufficient application of judicial mind at this stage.
3. The stage of framing of charges is based on adequate levels of judicial scrutiny, and disqualification at the stage of charging, if accompanied by substantial attendant legal safeguards to prevent misuse, has significant potential in curbing the spread of criminalization of politics.
4. The following safeguards must be incorporated into the disqualification for framing of charges owing to potential for misuse, concern of lack of remedy for the accused and the sanctity of criminal jurisprudence:
i. Only offences which have a maximum punishment of five years or above ought to be included within the remit of this provision.
ii. Charges filed up to one year before the date of scrutiny of nominations for an election will not lead to disqualification.
iii. The disqualification will operate till an acquittal by the trial court, or for a period of six years, whichever is earlier.
iv. For charges framed against sitting MPs/ MLAs, the trials must be expedited so that they are conducted on a day-to-day basis and concluded within a 1- year period. If trial not concluded within a one year period then one of the following consequences ought to ensue: – The MP/ MLA may be disqualified at the expiry of the one-year period; OR – The MP/ MLA’s right to vote in the House as a member, remuneration and other perquisites attaching to their office shall be suspended at the expiry of the one-year period.
5. Disqualification in the above manner must apply retroactively as well. Persons with charges pending (punishable by 5 years or more) on the date of the law coming into effect must be disqualified from contesting future elections, unless such charges are framed less than one year before the date of scrutiny of nomination papers for elections or the person is a sitting MP/MLA at the time of enactment of the Act. Such disqualification must take place irrespective of when the charge was framed.

After considering the Report the Court has directed that ‘in relation to sitting MPs and MLAs who have charges framed against them for the offences which are specified in Section 8(1), 8(2) and 8(3) of the RP Act, the trial shall be concluded as speedily and expeditiously as may be possible and in no case later than one year from the date of the framing of charge(s). In such cases, as far as possible, the trial shall be conducted on a day-to-day basis’.