You can't improve access to justice if the courts are inefficient: Daksh Co-Founder Harish Narasappa 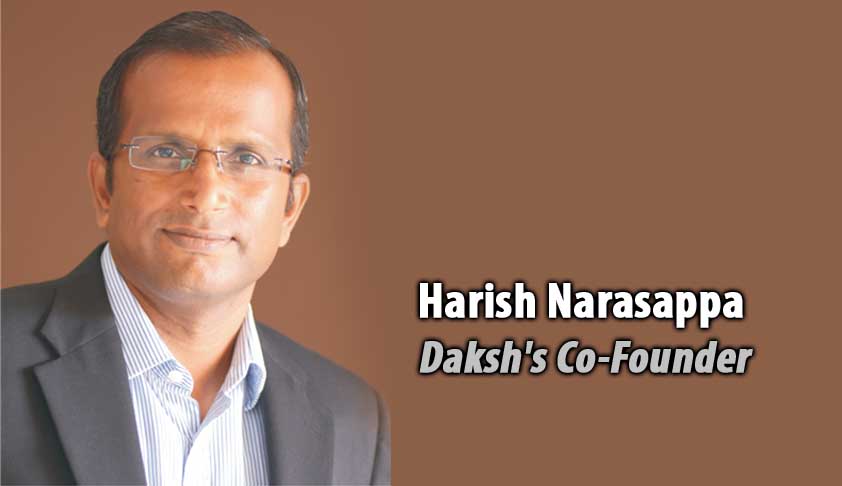 DAKSH, the Bengaluru-based NGO, is a civil society organisation that undertakes research and activities to promote accountability and better governance in India, founded by citizens from varied backgrounds. It has been working to create inclusive, transparent, self-correcting mechanisms that encourage accountability in all branches of the government.Its two main activities...

DAKSH, the Bengaluru-based NGO, is a civil society organisation that undertakes research and activities to promote accountability and better governance in India, founded by citizens from varied backgrounds. It has been working to create inclusive, transparent, self-correcting mechanisms that encourage accountability in all branches of the government.

Its two main activities are measuring political and judicial performance. It has designed, developed, and deployed a variety of measures to assess and analyse performance in the political space, such as conducting physical surveys to gather data on people’s perceptions of their elected representatives. The most significant one was a national, physical survey of over 2,65,000 people in 2014, assessing their perceptions of their Members of Parliament (MPs).

Daksh embarked on the Rule of Law Project in 2014 in order to evaluate judicial performance and in particular, to study the problem of pendency of cases in the Indian legal system. This project is based on quantitative research that will map the administration of justice in India.The report was released in New Delhi on 11 August in collaboration with EBC

Excerpts from the interview:

LiveLaw: Congratulations on the publication of the State of the Indian Judiciary Report. The Report is a mix of your findings and opinion pieces on the different aspects. On the day when it was released in Delhi, the panelists represented different viewpoints; we had Arvind Datar on the one side, and Indira Jaising and Mohan Gopal on the other. Each one of the panellists had a different take on the state of the Indian Judiciary. Daksh's stand on these conflicting viewpoints was not clear to the audience.

HBN: Thanks for your wishes. We view the report as the first of many outputs that our research will produce.

Actually, our report covers all the different viewpoints that were expressed during the panel discussion. Our data section and functioning of the judiciary section focuses on efficiency and the access to justice section focuses on the difficulties certain classes face in accessing the judiciary. Our view is that they are not independent issues and are linked and the data shows that. You cannot improve access to justice if the courts are inefficient. And inefficiency hurts the poor the most. So, there is no contradiction- it is just that different people have focused on different issues until now.

LiveLaw: For an average person wanting to decipher the exact problems of the Indian judiciary, and the remedies that may be effective, what does your report offer?

Delay and the lack of judicial access are things which one can easily recognise, but does your report offer any systemic remedies for these problems, which we need to campaign for?

HBN: The Report has been written in a form and manner that makes it accessible to non-lawyers as well. We have used a lot of charts and other visual media to make it friendly to the lay person. Systemic remedies are the next step and we are working on identifying two or three easily implementable steps. One of the things we are focusing on is simple steps to increase judicial time by a combination of technology and case flow management. We are trying to run a few pilots to test these possible solutions.

LiveLaw: If one reads the report right, it is the lower judiciary whose effectiveness we should aim at. Therefore, the investment in the training of the court staff, and the Judges, does make sense, would you agree?

HBN: Yes, the lower judiciary is where the bulk of the cases are held up. Yes, investment in training of court staff and judges makes sense. However, it is not happening at the scale that is required, particularly for the staff.

LiveLaw: On the administration side, you appear to support a separate cadre of court administrators. Is it the first time that such a suggestion is being made? What has been the feedback from the judiciary so far?

HBN: Yes, we do support a separate cadre of court administrators. The concept of court managers has been implemented in some states, but their impact is not visible, mainly because their roleand powers and their position in the administrative hierarchy has not been adequately defined and identified. Feedback from judiciary has been positive on court administrators. Of course, the main concern is that it should not adversely impact judicial independence and we agree with that.

LiveLaw: You are also critical of the judges being involved in the administration of the courts. But if the speeches made at the report release function in New Delhi are any indication, the judges love that kind of work, and are also probably distrustful of others being entrusted with it. Therefore, how will you convince the Judges that administration is not their area, and they should keep away from it.There was also a proposal to transfer the responsibility for administration of courts to professionals from the judges. Will the Judges trust the professionals?

HBN: We are critical because of two reasons- a) Judges do not have the time for it as they are busy with judicial functions, so policy level administrative decisions tend to get ignored and keep getting postponed. Conversely, administrative responsibilities should not come in the way of discharging judicial functions efficiently. After all, people become judges because they want to write judgments and be known for that, not for administrative acumen; b) judges are not experts in process and systems, they get appointed as judges because of their legal expertise. So, to expect them to also manage the judicial system is not fair. It is not a question of whether a few them excel in it or like it, it is just that they should not be doing it.

Our judicial system is now vast and requires full time expert attention. Judges do not have the time or expertise to provide that. Of course, there may be exceptions, but that just proves the broad point.As I mentioned earlier, judges recognize the need for professional support. If an appropriate system is proposed, I do not see why they will not accept it.

LiveLaw: Does the proposal to create the National Court of Appeals make sense to you? Will it help to relieve the Supreme Court of the burden of routine cases, because of which it is not able to focus on the Constitutional cases?

HBN: We have not studied this issue in detail to provide insightful comments.

LiveLaw: The controversy over the finalisation of the Memorandum of Appointments to appoint Judges of the higher Judiciary has led to a huge gulf between the Government and the Judiciary. How do you think this can be resolved, and what will be the consequences, if it is not resolved sooner rather than later.

HBN: Once the Government has accepted the NJAC judgment, I don’t see why they are trying to win points through the back door. The Government has no choice but to follow the judgment as it is the law of the land. Consequences are already visible. The High Courts cannot function at 50% of their strength. Backlogs are only going to increase. I hope this limbo does not continue.

LiveLaw: Specifically, what kind of cases are clogging the system and what can be done about it?

HBN: For example, in the civil justice system, land is the big elephant. Our data suggests that about 70% of cases relate to land. There are two factors here- a) the law declared by the SC and the HCs are not implemented properly by lower courts in a number of cases, leading to unnecessary appeals. This is clear if you look at the reported cases. In most of the cases the law is clearly laid down already, and the HC only repeats it. So, we need to address this. b) Second, land law reforms are overdue. Our land laws are more probably the most confusing in the world. That needs to happen. Also, we need to get rid of the powers of revenue authorities which are operating to create confusion on ownership of land. It is a historical relic and needs to be given a burial. Similarly, in High Courts, writs form a significant number of cases filed every year. And most of these are linked to bureaucratic inaction, apathy and deliberate non-compliance with declared law. Unless the higher judiciary comes down heavily on some of these issues, they will continue to add to the numbers before the judiciary.

LiveLaw: From your data, is it possible to draw an inference about the efficiency of Judges across the States?

LiveLaw: What are the factors which can help to maximise judicial time?

HBN: First, purely administrative issues in a case should not be brought before judges, for e.g., no translated copies, service has not happened, etc. I appreciate that some issues may require exercise of judicial discretion, but most process issues do not require that. Second, we should limit the number of cases listed every day (and actually most HCs have drafted case flow management rules mandating this, but it has not been implemented even though there is a Supreme Court judgment on the point). This will ensure that judges spend more time on each case in a day. If you multiply the total number of cases before each judge at any given time and do an analysis it is not necessary for 100 matters to be listed for hearing each day. It unnecessarily puts pressure on judges. Also, lawyers know that if they ask for an adjournment they will most probably get it, as the judge is pressed for time. All this not only takes away judicial time, but also adds to the delays.

HBN: Yes, judge to population ratio is not the correct metric. We should focus on litigation to population and the judge per 1000 cases ratios instead. We are working on a comparative ratio currently and will be publishing results shortly.

LiveLaw: In the introduction, while summing up Alok Prasanna Kumar's essay, you say that the question whether Judges are uncomfortable about deciding certain types of cases, leading to severe delays remains unanswered. Is it because data regarding this is difficult to obtain?

HBN: Yes, data is not available. While lawyers know the reasons why some judges do not pass orders on certain kinds of matters, it is not recorded anywhere. And we cannot equate all delay in passing orders to judges being uncomfortable with certain kinds of cases. Therefore, data alone cannot throw light on this issue. Qualitative analysis is required, but that makes it subjective and we end up entering a realm of speculation!