CAT’s Relief To IFS Officer Devyani Khobragade: Penalty Over, To Be Considered For Promotion [Read Order] 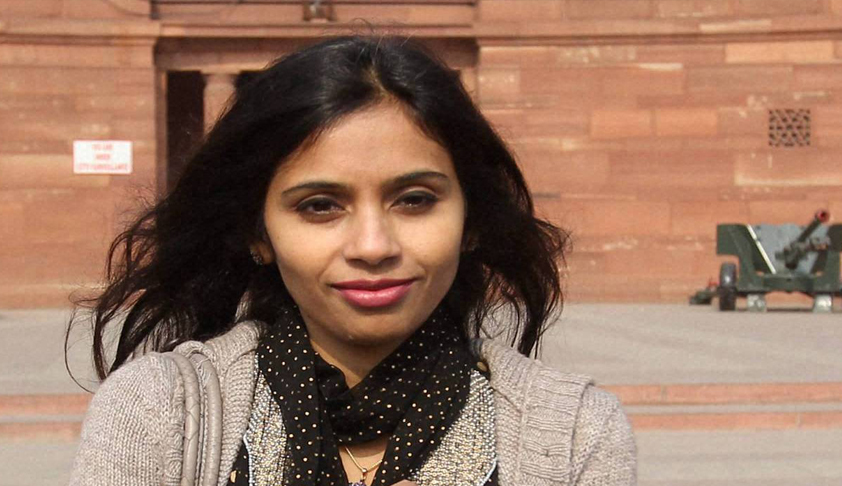 In a major relief to IFS officer Devyani Khobragade who once hit the headlines when she was arrested by US agencies for underpaying her domestic help and then subjected to a strip-search, the Central Administrative Tribunal (CAT) has directed the Ministry of External Affairs to treat her punishment of lowering of grade having come to an end in 2016 and also promote her to the grade of...

In a major relief to IFS officer Devyani Khobragade who once hit the headlines when she was arrested by US agencies for underpaying her domestic help and then subjected to a strip-search, the Central Administrative Tribunal (CAT) has directed the Ministry of External Affairs to treat her punishment of lowering of grade having come to an end in 2016 and also promote her to the grade of joint secretary, if found fit.

While criticising MEA for delay of 20 months in concluding the enquiry against the IFS officer, CAT ordered the ministry to open Devyani’s case which had not been considered for promotion and kept in a sealed cover in 2016 pending departmental enquiry against her while her batchmates were promoted.

Devyani was awarded a penalty of reduction to a lower stage in the time scale of pay for one year in November 2017, after which she had come to the Tribunal seeking her “duly merited promotion”.

A bench of Chairman Justice Permod Kohli and member KN Shrivastava in its order dated March 22 ordered as under:

ii) The sealed cover relating to the promotion of the applicant to the grade of Joint Secretary shall be opened and if she is found fit for promotion, she shall be promoted to the grade of Joint Secretary w.e.f. 01.11.2016 when her batchmates were promoted to such grade. This shall be done within a period of two months from the date of receipt of a certified copy of this order.  It is also clarified that the applicant shall be entitled to all consequential benefits.

Devyani had joined Indian Foreign Service (IFS) in the year 1999. While serving as the Indian Deputy Cousul General in New York, Devyani was arrested in December 2013 for underpaying her Indian maid. The US agencies subjected her to strip-search which led to a diplomatic standoff between India and the US.

Following news reports about her personal and professional life, Devyani gave interviews to TimesNow and NDTV covering her dispute with her domestic help and her complaint to the US authorities and also her acquiring US passport for her children.

Devyani’s counsel Sachin Chauhan told the tribunal that she had requested the Ministry to probe the source of leak of information about her to the media but in vain and she gave the interviews only to vindicate her stand.

It was for her interviews to the news channels that she was issued a memorandum/ show cause notice in October, 2014 to explain her conduct of going to the press without prior approval and making statements critical to the government or its policy.

Devyani, however, told the tribunal that she did not make any statement critical of the government or its policy.

In December 2014, Devyani was relieved of her duties and put in compulsory wait.

The MEA then issued a memorandum of charge in March 2015 proposing to take action against her for giving an interview to the media to build pressure to resolve her legal case, criticising the government and revealing the actions to be taken by the government.

While Devyani replied to the memo of charges immediately on March 23, 2015, no action was taken by MEA on her reply. Finally, after 20 months, the ministry made a reference to the UPSC on December 9, 2016, seeking its advice.

The UPSC vide its letter dated February 10, 2017 advised the Ministry to impose a “penalty of reduction to a lower stage in the time scale of pay by one stage for a period of one year” on the applicant.

Devyani made a representation on the UPSC advice and wrote to the Foreign Secretary for providing her the entire record forwarded to the UPSC for seeking its advice but did not hear from them.

The disciplinary authority in November 2017, imposed penalty of “reduction to a lower stage in the time scale of pay by one stage for a period of one year without cumulative effect and not adversely affecting her pension” on Devyani.

Devyani then moved CAT contending that in case of unexplained and wilful delay in disciplinary proceedings against an officer, denial of due promotion to the said officer will be extremely harsh, unfair and unreasonable.

“The UPSC advice did not recommend withholding of the applicant’s promotion. However, the delay of two years involved has in fact resulted in the withholding of her promotion for two years and thus rendering her to undergo agony of serving under her juniors,” she argued.

She also submitted that the UPSC had failed to note that she gave interviews only after her repeated requests to the MEA to stop malicious media campaigns against her, did not evoke any concrete action and no statement could be extracted from her interview which was critical of the government.

The Centre, on the other hand, told the tribunal that Devyani was charge-sheeted one year and eight months prior to the date when she was actually eligible for promotion along with her batch-mates and thus it could not be said that the memorandum of charge was issued with any mala fide intention.

What the CAT said

While holding that the disciplinary authority followed the principle of natural justice, the tribunal was critical of the 20-month delay in the instant case.

“Assuming that the Ministry would have taken a month’s time to process the reply of the applicant dated 23.03.2015 to the Memorandum of Charges, at the most the matter should have been referred to the UPSC by the respondent-ministry in April, 2015 for its advice. The UPSC advice would have come within two months or say by June, 2015.  Assuming further that the Ministry and the DA would have taken about two months to pass the final penalty order, such order could have been passed latest by August, 2015. Thus the currency of the penalty of reduction to a lower stage in the time scale of pay by one stage for a period of one year without cumulative effect which was to be imposed upon the applicant would have ended by July, 2016,” it said.

“From the inordinate delay of 20 months at the end of the respondents, we are fully convinced that the respondents have not shown any alacrity or seriousness to complete the DE proceedings against the applicant in a reasonable timeframe,” it remarked.

“This delay has severely prejudiced the case of the applicant for promotion to the next higher grade,”’ said the Tribunal adding that as per the Central Vigilance Commission (CVC) guidelines, the penalty order ought to  have been passed by the DA within a period of two months from the receipt of the reply to the memorandum of charges.

“If the aforesaid time frame was adhered to by the respondents, the applicant would have secured her promotion along with her batch mates…,” said the CAT.