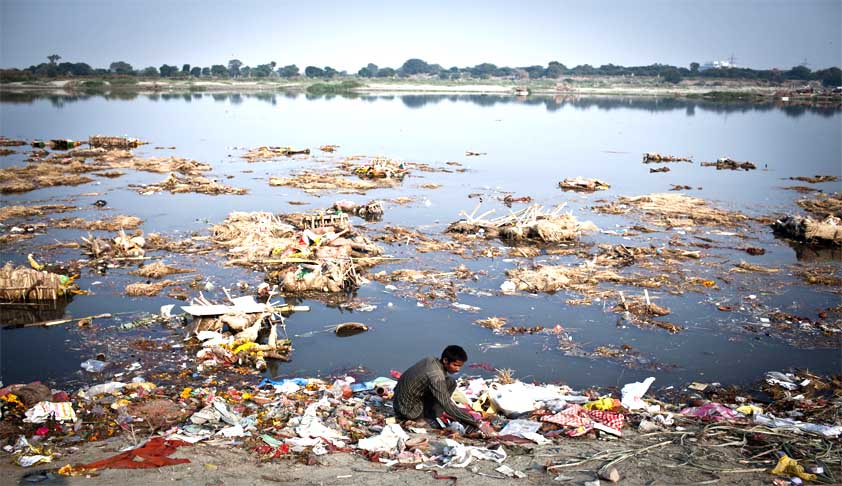 The Additional Chief Metropolitan Magistrate had convicted the appellant and sentenced him to undergo simple imprisonment for three years and a fine of Rs.1 lakh under the relevant provisions of the Water (Prevention and Control of Pollution) Act, 1974.

Section 25(1)(a) of the Act prohibits a person to establish any industry, operation or process or any treatment or disposal system which is likely to discharge sewage or trade effluent into a stream without previous consent of State Pollution Control Board. Accordingly, the consent of the State Government is necessary before running such establishment.

In this case, the industry was found running at the site without consent of Board as no material could be brought by defence that it had obtained consent. Burden of proof to prove that it had consent to establish was upon defence as it was specifically within its knowledge. It was also termed to be correct by the appellant that entire area in his possession was being used for kitchen/manufacturing/storing of raw material and the kitchen was connected to the municipal sewer line.

The judge found that there is no requirement of laboratory report in order to prosecute the appellant u/s 24(1)(b) of the Act, 1974. In case the prosecution is able to prove that "any other matter" was released by the unit which tend to impede proper flow of water or aggravate pollution, that only would suffice to attract punishment u/s 24(1)(b) of the Act 1974.

It is an evidence in this case that the appellant was running a sweet shop dealing in dairy products. The industry 'dairy product' has already been declared highly polluting industry vide order dated 05.02.2014 by Central Pollution Control Board as finds mention in the judgment of Hon'ble Apex Court in M.C. Mehta vs Union of India (2015) [12 SCC 764], the judge held.

As highlighted in Section 23 of the Act 1974, there is ample power with State Board for inspection for the purpose of examining any plant, record, register, document or for conducting search in order to find out as to whether the offence under the Act 1974 is being committed or not.

The legislative mandate vide which a minimum sentence of one year and six months has been prescribed in Section 43 of the Act 1974 for contravening the provisions of Section 24 of Act 1974 itself exhibits the gravity and seriousness of the offence. Accordingly, the prayer of the appellant for his release on payment of compensation only under Polluter Pay Principle is rejected, the judge held.

Citing the recent Uttarakhand High court’s judgment declaring rivers Ganga and Yamuna as living entities, the Judge held that there is no denying the fact that rivers in India are highly revered. Rivers are considered as sources of life in this agrarian country. The rivers have cultural, spiritual and religious connotations. However, it is also a fact that we are unable to ensure the physical protection of rivers owing to industrialization, urbanization etc, the judge held.

The judge commuted the sentence of three years imprisonment, imposed by ACMM, to two years, without altering the fine.  The Special Judge, however, added compensation of Rs.2.5 lakhs to be paid by the appellant, by way of contribution to the Prime Minister’s Relief Fund.