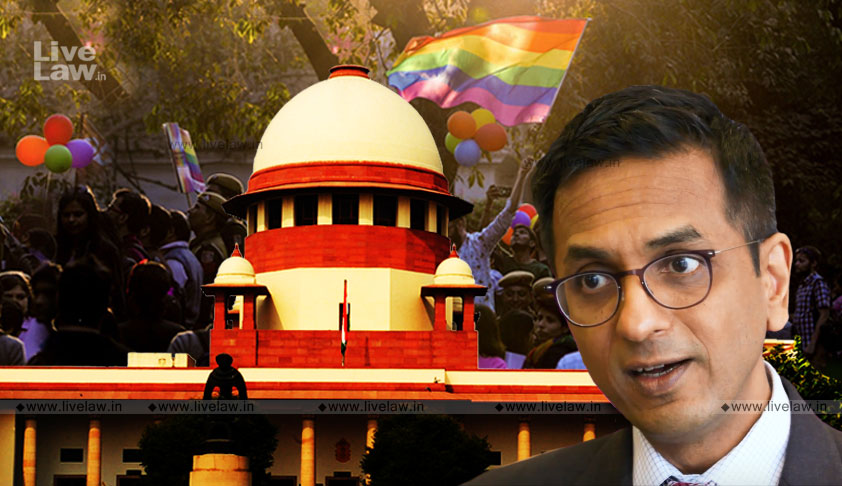 "Sexuality must be construed as a fundamental experience through which individuals define the meaning of their lives"Deeply moving and empathetic, Justice Chandrachud's judgment in the Section 377 case makes for a compelling read. Rather than legalese, the judgment is brimming with a profound understanding of the human condition and of the urge of an individual to find meaning...

Deeply moving and empathetic, Justice Chandrachud's judgment in the Section 377 case makes for a compelling read. Rather than legalese, the judgment is brimming with a profound understanding of the human condition and of the urge of an individual to find meaning through self-expression by staying true to one’s core identity.

The judgment deconstructs Section 377 in a larger perspective, to conclude that it is not merely stifling expression of sexuality which is in variance with the dominant “hetronormative” narrative, but is advancing sexual stereotypes and cementing traditionally assigned gender roles. On this premise, Section 377 is held as causing discrimination on the ground of ‘sex’, so as to infringe Article 15(1) of the Constitution. While doing so, the judgment in Nargesh Meerza which took a narrow view of sex-based discrimination was overruled. Moving further, the judgment holds that Section 377 IPC infringes ones’ right to intimacy, which has been held to be a facet of right to privacy under Article 21, observing that “consensual sexual relationships between adults, based on the human propensity to experience desire, must be treated with respect”

The judgment recognizes the need to remedy the “tragedy and anguish” inflicted by the Section. The history of the section is traced to identify its roots in Judeo-Christian notions of morality, which found reflection through a colonial legislation. The judgment draws power from the exhortations of Dr.Martin Luther King against the ‘doctrine of wait’, which advocates that non-conformists should wait till the mainstream understands their way of life, before disturbing established social mores. The sexual minorities have waited long, but nothing changed.

Unreasonable classification based on ‘Order of Nature’.

The section was held to be violative of Article 14 of the Constitution, as it is based on unreasonable classification. The 2013 SC judgment in Suresh Kumar Koushal had held that there was no unreasonable classification, as “those who indulge in carnal intercourse in the ordinary course and those who ... [do so] against the order of nature constitute different classes”. This view was criticised as a formalistic application of Constitution. Justice Chandrachud identified the base of classification in Section 377 as “order of nature”, an indeterminable factor. “What is ‘natural’ and what is ‘unnatural’? And who decides the categorization into these two ostensibly distinct and water-tight compartments? Do we allow the state to draw the boundaries between permissible and impermissible intimacies between consenting adults?”, the judgment asked (Para 28, Page 294).

“Section 377 is based on a moral notion that intercourse which is lustful is to be frowned upon.It does so, on the basis of a social hypocrisy which the law embraces as its own. It would have human beings accept a way of life in which sexual contact without procreation is an aberration and worse still, penal. It would ask of a section of our citizens that while love, they may, the physical manifestation of their love is criminal. This is manifest arbitrariness writ large”, (Page 298)

Section 377 reveals only the hatred, revulsion and disgust of the draftsmen towards certain intimate choices of fellow human beings.”, held the judgment(Page 301).

A significant finding of the judgment is that discrimination based on ‘sexual orientation’ amounts to sex-based discrimination, which is prohibited under Article 15(1). While reaching this conclusion, the judgment overturned the precedent Air India v.Nargesh Meerza (1981) 4 SCC 335. In the said case, service conditions prescribing different age of retirement for air hostesses, and that pregnancy will attract termination etc. were not held to be discriminatory with respect to male colleagues on the ground that females and males in service of aircraft constituted different cadres, and hence were not comparable. It was held there that where persons of a particular class, in view of the “special attributes, qualities” are treated differently in ‘public interest’, such a classification would not be discriminatory

Justice Chandrachud criticised this view as missing to notice the latent stereotypical notions of the differences between men and women which are then used to justify the discrimination. Nargesh Meerza was held to be incorrect noting, “A discrimination will not survive constitutional scrutiny when it is grounded in and perpetuates stereotypes about a class constituted by the grounds prohibited in Article 15(1). If any ground of discrimination, whether direct or indirect is founded on a stereotypical understanding of the role of the sex, it would not be distinguishable from the discrimination which is prohibited by Article 15 on the grounds only of sex”(para 41, page 313).

This was applied in the present case by identifying the root premise operating behind Section 377 – to reinforce gender stereotypes. It was held that Section 377 was based on ‘heterosexism’ and ‘gender binary’.

“If individuals as well as society hold strong beliefs about gender roles – that men (to be characteristically reductive) are unemotional, socially dominant, breadwinners that are attracted to women and women are emotional, socially submissive, caretakers that are attracted to men – it is unlikely that such persons or society at large will accept that the idea that two men or two women could maintain a relationship. If such a denial is further grounded in a law, such as Article 377 the effect is to entrench the belief that homosexuality is an aberration that falls outside the ‘normal way of life.’” (para 44, page 319)

It was also held that statutes like Section 377 give people ammunition to say “this is what a man is” by giving them a law which says “this is what a man is not.” The existence of the provision nonetheless facilitates it by perpetuating homophobic attitudes and making it almost impossible for victims of abuse to access justice. Thus, the social effects of such a provision, even when it is enforced with zeal, is to sanction verbal harassment, familial fear, restricted access to public spaces and the lack of safe spaces.

A notable feature in the approach of Justice Chandrachud is that he did not dwell much on the argument that Section 377 impacts heterosexual couples as well, as regards their involvement in sexual acts which are non-penovaginal. He emphatically asserted that the impact of the section was on sexual minorities (Para 44, Page 315). Though the provision is ‘facially neutral’ the effect of the provision is to efface specific identities.

“While facially Section 377 only criminalizes certain “acts”, and not relationships, it alters the prism through which a member of the LGBTQ is viewed. Conduct and identity are conflated.The impact of criminalising non-conforming sexual relations is that individuals who fall outside the spectrum of heteronormative127 sexual identity are perceived as criminals”(Para 56, Page 334)

Fresh perspective on right to privacy of sexual minorities

The judgment brought in a fresh perspective to analyse the right to privacy of sexual minorities in the light of Puttaswamy judgment. While sexual orientation has been held as a facet of right to privacy, to push sexual minorities to their private spaces alone will amount to reinforcing the closet in which they are in. The judgment powerfully stated that the “closet has to be confronted”. Confronting the closet would entail “reclaiming markers of all desires, identities and acts which challenge it.” It would also entail ensuring that individuals belonging to sexual minorities, have the freedom to fully participate in public life, breaking the invisible barrier that heterosexuality imposes upon them. Constitution must recognise that the public assertion of identity founded in sexual orientation is crucial to the exercise of freedoms(para 60, page 337). It is imperative that the protection granted for consensual acts in private must also be available in situations where sexual minorities are vulnerable in public spaces on account of their sexuality and appearance.

“If one accepts the proposition that public places are heteronormative, and same-sex sexual acts partially closeted, relegating ‘homosexual‘ acts into the private sphere, would in effect reiterate the “ambient heterosexism of the public space.”  It must be acknowledged that members belonging to sexual minorities are often subjected to harassment in public spaces.The right to sexual privacy, founded on the right to autonomy of a free individual, must capture the right of persons of the community to navigate public places on their own terms, free from state interference” (para 62, page 339)

The judgment is a “celebration of sexual agency” in the light of right to intimacy.  Right to intimacy, flowing from the right to privacy and individual autonomy, has not been so beautifully commented upon in any other judgment. The discussion on this, from Paragraph 67, page 344 onwards, is captivating and transcendental. Certain profound observations on the human longing for fulfilment of desire and companionship are extracted below :

“Consensual sexual relationships between adults, based on the human propensity to experience desire must be treated with respect. In addition to respect for relationships based on consent, it is important to foster a society where individuals find the ability for unhindered expression of the love that they experience towards their partner”.

“An individual’s sexuality cannot be put into boxes or compartmentalized; it should rather be viewed as fluid, granting the individual the freedom to ascertain her own desires and proclivities”.

“Accepting the role of human sexuality as an independent force in the development of personhood is an acknowledgement of the crucial role of sexual autonomy in the idea of a free individual. Such an interpretation of autonomy has implications for the widening application of human rights to sexuality”.

“Sexuality cannot be construed as something that the State has the prerogative to legitimize only in the form of rigid, marital procreational sex. Sexuality must be construed as a fundamental experience through which individuals define the meaning of their lives”.

“Human sexuality cannot be reduced to a binary formulation. Nor can it be defined narrowly in terms of its function as a means to procreation. To confine it to closed categories would result in denuding human liberty of its full content as a constitutional right”

“The Constitution protects the fluidities of sexual experience. It leaves it to consenting adults to find fulfilment in their relationships, in a diversity of cultures, among plural ways of life and in infinite shades of love and longing”.

The conclusions of the judgment can be summated as :


The judgment soulfully addresses certain existential puzzles of human condition – identity, autonomy, relationship with the collective, dynamics of desire etc. - through the constitutional framework. As much as with constitutional erudition, the judgment has been penned with a romantic and humane touch.