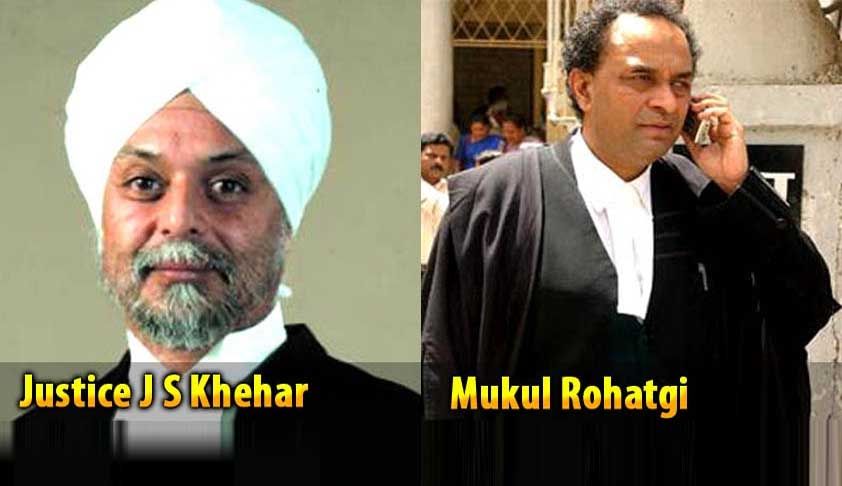 The sensitive judges appointments matter raised by two PILs filed by Lt Col Anil Kabotra and Ashwini Upadhyaya, on which previous chief justice T S Thakur constantly pulled up the government, came up before Chief Justice J S Khehar for the first time.Making use of change of bench Attorney General Mukul Rohatgi urged the CJI to dismiss the PILs contending that such matters should be dealt at...

Making use of change of bench Attorney General Mukul Rohatgi urged the CJI to dismiss the PILs contending that such matters should be dealt at the administrative side through constant interaction between the executive and the judiciary and not at the judicial side in open court.

But CJI Khehar rejected AG's plea saying "once we entertained a petition we cannot throw it away like this. It cant be treated in a slipshod manner. We have to pass an order and they say they are espousing the cause of judiciary. So we cannot leave it and run away".

The bench however adjourned the matter by a month seeking a status report from the government on filling up of vacancies and decisions on long pending transfers.

"WILL LAY DOWN RULE ON RECUSALS"

There was some heated exchange at the outset as Advocate Mathew Nedumpara urged CJI Khehar to recuse from the hearing of the PILs saying the CJI who takes decisions on administrative side on judges appointments being head of the collegium should not hear the PILs on judicial side.

Nedumpara had earlier filed petitions challanging the elevation of Justice Khehar as Chief Justice. All three petitions were dismissed.

" WILL CONSIDER ALL INDIA JUDICIAL SERVICE"

On another PIL filed by advocate Ashwini Upadhyaya seeking an All India Judicial Service, the bench said all of it will be considered including the plea for setting it up, on the next date of hearing.

On january 20, his retirement eve, previous Chief Justice T S Thakur once again pulled up the Centre on the contentious issue of judges appointment and transfer.

It was when the petitioners reminded that despite the order of the collegium way back in February this year, several judges of the High Court and Chief Justices have not been transferred.

“Why are judges not transferred despite collegium’s recommendation ? you must have plausible explanations… why are you sitting on it ..the files cannot languish..it has been ten months now..you have to take a decision. What is happening ??”, Chief Justice T S Thakur had told Attorney General Mukul Rohatgi.

When Rohatgi repeatedly said “I will take instructions”, an angry Jethmalani said “What a situation has come about where the attorney has to go around taking instructions whiel the government should have properly briefed him ahead of the court hearing.

The CJI asked AG to file a status report on the transfers and the reasons for the delay within two weeks.

On November 18 fresh confrontation had set off between the Supreme Court collegium and the Centre on November 18 with the Chief Justice T S Thakur firmly telling Attorney General Mukul Rohatgi that the collegium has reiterated the names of all 43 judges for the High Courts whose candidature were sent back for reconsideration to the collegium by the Centre.

“We (collegium) met last recently and we are reiterating all the names. The appointment may be made”, Chief Justice Thakur told Rohatgi.

Centre had refused to appoint 43 of 77 names recommended by Collegium for appointment as HC Judges.

Standing by its decision to refer back for reconsideration to supreme court the names of 43 candidates for appointment as judges in high courts, the Centre has said in the parliament that the decision was based on “adverse intelligence reports and serious nature of complaints” against them.

Minister of state for law PP Chaudhary had told the Rajya Sabha in a written reply: "The major reasons for referring back 43recomendees to the Supreme Court collegium on the appointment of judges are views of consultee judges, views of constitutional authorities, adverse intelligence bureau inputs, serious nature of complaints received against recommendees. Out of the 43 names returned to it by the government for reconsideration, the Supreme Court collegium has reiterated its recommendation for 37, deferred three proposals while three other names are still with it”.

Two weeks after slammed for attempting of trying to bring the judiciary to a grinding halt by delaying appointment of judges, the Centre had on November 11 told the CJI-led bench that 34 judges have been appointed to the High Courts.

Appearing for Centre Attorney General Mukul Rohatgi said out of 77 names recommended by collegium, 43 names have been sent back for reconsideration. After the AG submitted a list regarding the appointments, CJI Thakur had perused it and said the collegium will meet onNovember 15 and a detailed order will be passed later in open court.

"In Allahabad, out of a sanctioned strength of 165 there are only 77 judges. In Karnataka High Court, an entire floor of courts are locked because there are no judges. Once we had a situation where we had judges but no court rooms. But now there are courtrooms but no judges. You may now as well close court rooms down and lock justice out. You can have the institution called the judiciary locked”, an angry CJI had told Rohatgi who represented the centre while hearing the PIL filed by Kabotra and lawyer Ashwini Upadhyaya on the issue.

The CJI then had said “what about the remaining six..it has been four months..over all we had made 88 recommendations..you are sitting on them..If there are inconsistencies with them bring it back. If there are problems with the candidates tell us..do not bring the judiciary to a grinding halt”.