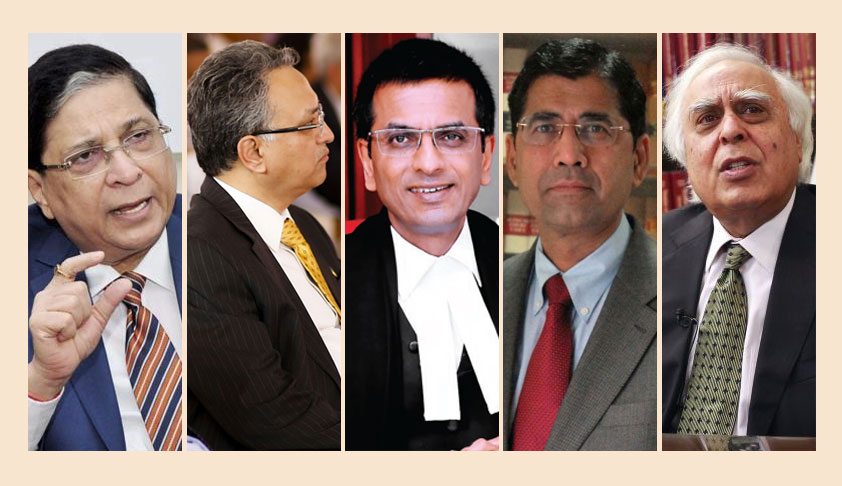 The Supreme Court bench of Chief Justice Dipak Misra, Justice DY Chandrachud and Justice AM Khanwilkar on Tuesday observed that the apex court judgment, in Suresh Kumar Kaushal v Naz Foundation [(2014) 1 SCC 1], upholding the constitutionality of Section 377 of the IPC requires re-examination. Noting that the matter involves substantial constitutional issues, the bench decided to refer the...

The Supreme Court bench of Chief Justice Dipak Misra, Justice DY Chandrachud and Justice AM Khanwilkar on Tuesday observed that the apex court judgment, in Suresh Kumar Kaushal v Naz Foundation [(2014) 1 SCC 1], upholding the constitutionality of Section 377 of the IPC requires re-examination. Noting that the matter involves substantial constitutional issues, the bench decided to refer the same to a Constitution bench of appropriate strength.

Continuing in favour of decriminalisation of homosexuality, the senior advocate contended, “I am sorry to say that the Supreme Court in its 2014 judgment has not considered any important aspects, and merely upheld the constitutionality of Section 377 of the IPC on the ground that the gay community affected by the provision is a minority group. The IPC was drafted back in the year 1860, since when there has been considerable progress in the society. Countries like the USA and England have accepted the concept of homosexuality.”

Referring to the judgment of the 9-judge bench of the apex court in the KS Puttaswamy case , Datar stated, “A 9-judge bench of this court has observed that the right of an adult to choose their sexual partner as is intrinsic in their fundamental right to life under Article 21.”

In response, Datar said, “That is the point for consideration by the court- whether a partner of the same gender could be a ‘natural sexual partner’ or would it be ‘carnal intercourse against the order of nature’ as under Section 377”.

Datar also relied on the concurring judgment of Justice Sanjay Kishan Kaul in so far it was opined therein that “the right of privacy cannot be denied, even if there is a minuscule fraction of the population which is affected. The majoritarian concept does not apply to constitutional rights and the courts are often called up on to take what may be categorized as a non-majoritarian view, in the check and balance of power envisaged under the Constitution of India. One’s sexual orientation is undoubtedly an attribute of privacy”.

Further, Datar relied on the Delhi High Court judgment in Naz Foundation v Government of NCT of Delhi, which was subsequently overruled by the apex court in the Suresh Kumar Koushal matter, submitting that the high court had arrived at the logical conclusion of striking down Section 377 of the IPC in so far as it criminalises homosexuality after a detailed consideration of the changed social times and the contemporary laws of other progressive countries.

Senior counsel Kapil Sibal also drew the attention of the bench to the judgment in NALSA case [(2014) 5 SCC 438], where the apex court had accorded recognition to the rights of the transgender community and emphasised on gender equality.

The bench, in referring the matter to a Constitution bench for reconsideration of the vires of Section 377, noted the submission of Datar that the division bench of the Supreme Court in delivering the judgment in Suresh Kumar Koushal case was guided by the concept of majoritarianism, being equivalent to the conception of social morality, which in turn is different from constitutional morality: “Rule of law depends upon constitutional supremacy. When the supremacy of the Constitution prevails, the existing norms of the society would not interfere therewith. The interpretation of Article 21 by the 2-judges bench is narrow and not guided by Article 14”.

The bench also referred to the observations in the Justice Puttaswamy case in respect of the rights of the LGBT community:  “Their rights are not ‘so-called’ but are real rights founded on sound constitutional doctrine. They inhere in the right to life. They dwell in privacy and dignity. They constitute the essence of liberty and freedom. Sexual orientation is an essential component of identity. Equal protection demands protection of the identity of every individual without discrimination.”

The bench on Monday noted that Section 377, in so far as it destroys individual choice and sexual orientation, cannot be regarded as a reasonable restriction on the exercise of one’s fundamental rights.

"What constitutes “against the order of nature” for the purpose of Section 377 is not a constant phenomenon; like societal morality, it also changes from age to age. What is natural to one may not be natural to others. The concept of what is natural cannot be regulated by law so as to encroach upon the rights inherent in Article 21".

The bench further observed that a section of the society which exercises its free will cannot be compelled to live in the fear of law. Unless such law is backed by a constitutional sanction, it shall be unbecoming of a civilised society.

Finally, the bench remarked that the liberty of consenting adults to engage in sexual intercourse with a partner of their choice, without any restrictions as to gender, needs to be debated upon. The bench laid emphasis on ‘consensual sex between adults’ to prevent children from falling prey thereto and to ensure the protection of children in all spheres.

"Section 377 IPC uses the phraseology “carnal intercourse against the order of nature”. The determination of order of nature is not a constant phenomenon. Social morality also changes from age to age. The law copes with life and accordingly change takes place. The morality that public perceives, the Constitution may not conceive of. The individual autonomy and also individual orientation cannot be atrophied unless the restriction is regarded as reasonable to yield to the morality of the Constitution. What is natural to one may not be natural to the other but the said natural orientation and choice cannot be allowed to cross the boundaries of law and as the confines of law cannot tamper or curtail the inherent right embedded in an individual under Article 21 of the Constitution. A section of people or individuals who exercise their choice should never remain in a state of fear. When we say so, we may not be understood to have stated that there should not be fear of law because fear of law builds civilised society. But that law must have the acceptability of the Constitutional parameters. That is the litmus test".

However, the bench clarified that the scope of reference for reconsideration of the constitutional validity of Section 377 of the IPC does not extend to the criminalisation of the act of bestiality there under. In the order the bench said;

"It is necessary to note, in the course of hearing on a query being made and Mr.Datar very fairly stated that he does not intend to challenge that part of Section 377 which relates to carnal intercourse with animals and that apart, he confines to consenting acts between two adults. As far as the first aspect is concerned, that is absolutely beyond debate. As far as the second aspect is concerned, that needs to be debated. The consent between two adults has to be the primary pre-condition. Otherwise the children would become prey, and protection of the children in all spheres has to be guarded and protected. Taking all the apsects in a cumulative manner, we are of the view, the decision in Suresh Kumar Kaushal's case (supra) requires re-consideration. As the question relates to constitutional issues, we think it appropriate to refer the matter to a larger Bench"