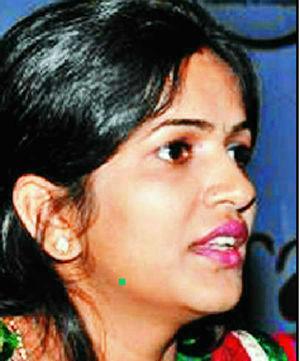 The deceased, Gitanjali Garg’s body, aged around 30, was found lying in a park with two bullet injury marks on Wednesday evening.  CJM Garg's licensed revolver was found near the body. Garg had alleged that Geetanjali (pictured) committed suicide.

However, the postmortem revealed that Geetanjali had been shot in the thigh, chest and chin. There was also a mark on the back of her head which, according to the doctors, appeared to have been sustained after being hit with a heavy object from behind. The autopsy has ruled out suicide.

Earlier, Pradeep Aggarwal, Gitanjali’s brother had lodged the FIR on Saturday. He alleged that Garg and his family harassed his sister for having two daughters and not giving the family a male child. He asserted that his sister was a strong independent woman who could not have committed suicide.

The deceased’s family also alleged that the local police were “favouring” the CJM.  According to Gitanjali’s family, CJM is using his influence to wriggle out of the matter and therefore, demanded a fair and impartial investigation by CBI.

"Police is already favouring them," Geetanjali's father O P Aggarwal alleged. "The complaint was to be registered on Friday but it could be done only at 12.30AM on Saturday as they made all attempts to deter us. Despite grave charges, Ravneet has not been interrogated so far”, TOI reported.

Police have issued notice to Garg and his family to join investigations. Ravneet Garg has been asked to join investigation. Police confirmed that they have already recorded statements of his driver, guard and peon. TOI report indicates that Garg is expected to be questioned tonight.