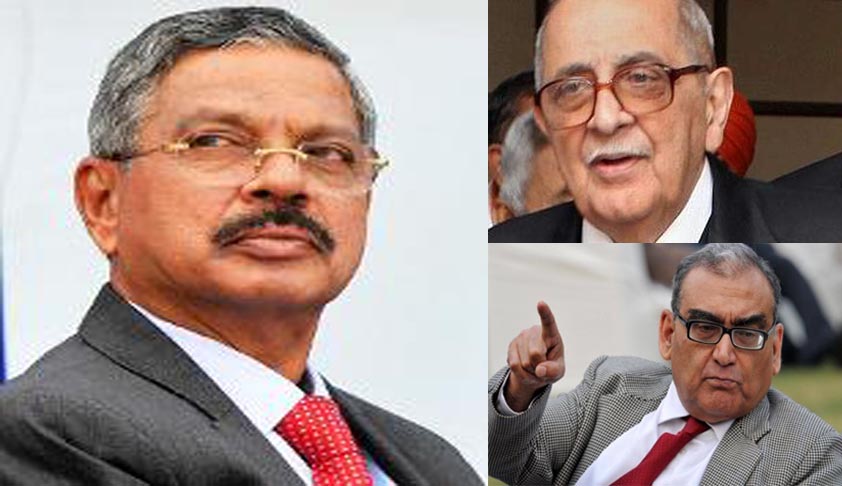 Constitutional expert and noted Jurist Fali S Nariman has described Chief Justice Dattu’s remarks on Prime Minister Narendra Modi  “inappropriate and ill-advised.”In an E-mail reply to Hindu he said “the media should not have, in the first place, publicised Mr. Dattu’s “personal remarks”, reportedly made during an “informal interaction.” He also added the...

In an E-mail reply to Hindu he said “the media should not have, in the first place, publicised Mr. Dattu’s “personal remarks”, reportedly made during an “informal interaction.”

He also added the following statements

“My initial response to the reported comments of the CJI in the press is that what was said at an “informal interaction” [as you call it] is not to be publicised. But since the remarks have now been reported, I would describe them as “inappropriate and ill-advised”: because they send the wrong signals – especially to people looking for wrong signals!”

“But what has not made the headlines in any newspaper is that the CJI also reportedly said during his “informal chat” with journalists that there must always exist tension between the Executive and the Judiciary. Correctly said.”He added

“As to the CJI’s comments about the NJAC, I do not regard them as inappropriate. He reportedly [and rightly] said: “The legislature has done its job and we will do ours”.

“Lastly, you ask what is the protocol for “serving judges” about making comments outside court. The protocol is to let comments about men, matters and other things always appear only in judgments; “informal interaction” – particularly with practising lawyers and members of the press are best avoided.”

Justice Markandeya Katju has also criticized CJI Dattu on the issue. He wrote in his Facebook post as follows;

“The Chief Justice of India Justice Dattu in an interview with journalists said that Prime Minister Modi is ' A good leader, a good human being, and a man with foresight '.

This reminds one of the letter another Chief Justice of India, Justice P.N. Bhagwati wrote to Prime Minister Indira Gandhi in which he said : “ May I offer you my heartiest congratulations on your resounding victory in the elections and your triumphant return as the Prime Minister of India...I am sure that with your iron will and firm determination, uncanny insight and dynamic vision, great administrative capacity and vast experience, overwhelming love and affection of the people and above all, a heart which is identified with the misery of the poor and the weak, you will be able to steer the ship of the nation safely to its cherished goal.”

One wonders whether it is proper for a Chief Justice of India to talk openly like this ? As senior advocate and M.P. Majeed Memon said, such a statement may send a wrong impression in the public”

Responding to one of the comments in his FB page he said .

“The question is whether a sitting Judge should praise a politician except through his judgment ?

He is a sitting Judge. He could give such a statement after retirement. Sitting Judges have certain constraints.

He should not have made the statement at all. If asked about Modi he should have said that it would not be proper for him to comment

No, as long as a Judge is on the bench he should not openly praise or criticize a politician except through his judgments. Such statements send a wrong message that the Judge is leaning towards the politician. When the question was asked by the journalist, Justice Dattu should have said that it would not be proper for him to comment”

Last week during a press conference Justice Dattu described PM Modi as "a good leader, a good human being and a man with foresight".

""I rate him as a good leader, good human being and a man with a foresight and one who wants good governance,"  He said

According to Dhananjay Mahapatra  (TOI )

“The testimonial is significant, considering that the Supreme Court's engagement with complaints concerning the 2002 riots in Gujarat under Modi's chief ministership had kept him on tenterhooks. The apex court had set up a Special Investigation Team to "look into" the allegation of JakiaJaffri, widow of former Congress MP Ehsan Jaffri who was killed in the riots, that Modi and many other politicians, bureaucrats and policemen abdicated their constitutional duties during the riots. When the SIT gave a clean chit to Modi, the SC asked the trial court to look into the findings of the investigation team ”

Justice Dattu also said that "the government has not said no to any of the proposals given by me. Till date, their response to the demands of judiciary has been very good. All my demands for the judiciary have been taken care of.”

“Is it a case of failure of the judiciary or the government when despite several judgements and orders by the courts, nothing changes on ground? I would say that judiciary has done its duty if the law is clear on the point and appropriate directions have been issued,”

“If there is a complete failure of the system and there is no hope for the citizens, if there is complete deficit in the governance, where else should citizens go? If such is the situation, should the courts show fidelity to various strict principles when the people are suffering, when most of them cannot even afford to come to the Supreme Court? When the darkness is all around, don’t you think we will be asked to take over so many dimensions of governance?”

He also stated that the executive’s will had been lacking and those who were supposed to act must now be made responsible for their actions.