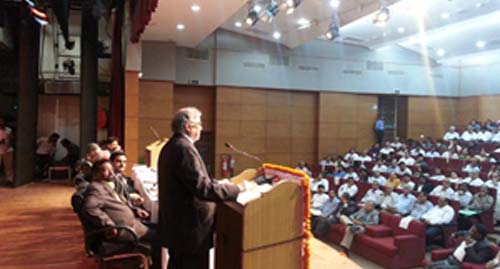 Authored by Dr. KS Chauhan, Advocate, Supreme Court of India specializing in Constitutional Law, Public Law and Service Law, the book focuses on the Indian polity with comparative insights of practices and experiences of various liberal democracies in the world. It is aimed at meeting the demand of understanding the Parliament as an institution of national importance and bedrock of the Indian Polity.

The book launch was attended by Judges from Supreme Court, several advocates from the bar, Vice Chancellors, academicians and members of the legal fraternity. Speaking on the occasion, Mohan Ramaswamy, Managing Director LexisNexis said, “this is one of the most recent and comprehensive books that provides a comparative study of various democracies. The chapters on Defection, Judicial Review and Parliamentary Privileges, and Media make it stand apart. This comprehensive treatise on Parliament Powers, Functions & Privileges will not only  appeal to a large section of the legislative houses, judiciary, advocates and constitution law experts, journalists, law teachers and students, but even public at large”.

The author, Dr. Chauhan, has argued in the famous case on parliamentary privileges popularly known as the Cash for Query case (Raja Ram Pal v. The Hon’ble Speaker, Lok Sabha) in 2007, before the Constitution Bench of the Supreme Court. He has also appeared in leading cases including M. Nagaraj v. Union of India in 2006, and other constitutional law cases.

The Press Release issued by LexisNexis India states “The literature on Parliament, its working and functioning is in abundance, however, there was a vacuity in the existing pool of literatures (treatises, books, compendium, cases and materials etc. on the working and functioning of the Parliament) which covers all the three important aspects i.e. powers, functions and privileges. This book is the modest attempt to fill the existing vacuum in the world of academia. The voluminous work begins with a narrative on historical evolution of parliamentary institutions in England and India; powers and functions of Parliament, elections of its constituent and members. The principles of Anti-defection law inserted through the Constitution (52 Amendment) Act, 1985, has been dealt separately in a chapter titled ‘Defection as Disqualification’, in addition to the disqualifications prescribed in the Constitution. Apart from this, the book makes an in-depth analysis of the origin, purposes and constitutional practices of Parliamentary Privileges outlining the height of tension between the office of the Speaker, Lok Sabha and the Supreme Court in Cash for Query case (2007). The chapter on ‘Privileges and Media’ is a special highlight of the book which also examines the role of media vis-a-vis parliamentary privileges, issues of sting operations and its limitations etc. “