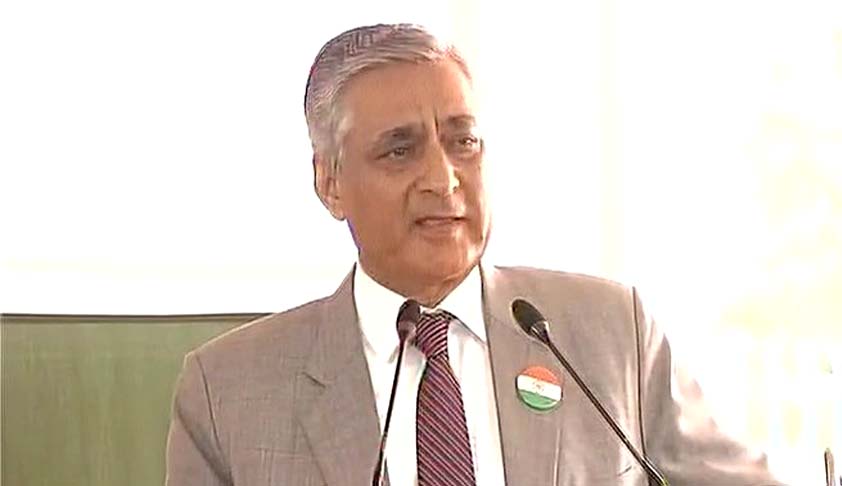 Chief Justice of India TS Thakur today used the Independence Day function at the Supreme Court premises to lash out at Prime Minister Narendra Modi and Law Minister Ravi Shankar Prasad for not mentioning anything about the justice delivery system or judges appointment in their speeches.“You make roads, schools, hospitals but please also do say something about justice delivery to people. I...

Chief Justice of India TS Thakur today used the Independence Day function at the Supreme Court premises to lash out at Prime Minister Narendra Modi and Law Minister Ravi Shankar Prasad for not mentioning anything about the justice delivery system or judges appointment in their speeches.

“You make roads, schools, hospitals but please also do say something about justice delivery to people. I heard the speech of our great and respected Prime Minster for an hour and of the law minister just now. I thought they will say something about justice delivery and appointment of judges. Cases are piling up there are no sufficient number of judges…but sadly nobody seems to be bothered”, he said after unfurling the national flag at a function.

Prasad and all the judges of the apex court, Supreme Court Bar Association members and large number of advocates were present at the function.

“You have something to say on every sector and also have promises. Throw something at us too”, was CJI’s message to PM.

Speaking before the CJI, the Law Minister said Affirmed that his government was “committed to the cause of judicial independence” and very soon a memorandum of procedure will be finalized after harmonious consultation with the collegium.

“Judicial delivery is integral to good governance. Our commitment to the cause of judicial independence is total. We are in the process of finalizing the MoP. I want to clarify that regardless of that, judicial appointments are going on. The government and the collegium have to work in harmony. I know the problems we will work together.

A REPEAT OF FRIDAY

The harsh comments incidentally comes two days after the Chief Justice bluntly asked the Centre if it was trying to bring the entire judicial institution to a “grinding halt”.

The confrontation triggered on October 17, 2015 following the apex court’s quashing of the NJAC law brought by the Modi government which gave the executive and civil society a major say in the appointments virtually touched a flashpoint with the CJI accusing the government of sitting on recommendations of the Collegium.

"The collegium has cleared 75 names of high court judges (for transfer/ appointment) but they have not been approved. I don't know why, where these files are stuck," a three-judge bench headed by Chief Justice T S Thakur had said while hearing a PIL PIL filed by 1971 war veteran Lieutenant Colonel Anil Kabotra on the issue.

"I will take it up at the highest level and will come back to the court," Attorney General Mukul Rohatgi told the bench and pleaded that no notice be issued for the time being in the PIL

Not satisfied by Rohatgi’s repeated assurances, CJI Thakur said "Don't force us to ask where the files are... don't force us to judicially intervene... don't try to bring this institution to a grinding halt... That's not the right thing to do."

It is to be note that on April 25, 2016, during the national conference of state chief justices and chief ministers , an emotional CJI Thakur went on to launch an unprecedented attack on the present and earlier governments for often blaming the judiciary for mounting backlog of cases, which touched an alarming 3.14 crore, but at the same time doing nothing to improve the number of judges and increasing the number of courts despite repeated pleas from the judiciary.

The ratio at present is 10 judges for 1 million people while the Law Commission had way back in 1987 recommended increasing it to 40.

As widely known, the collegium headed comprising of the Chief Justice and four senior most judges of the apex court have strong reservations over the draft MoP (memorandum of procedure) giving the last word to the government to reject candidates on the grounds of national security.

The Government’s version of the Memorandum of Procedure (MoP) includes a provision for a Secretariat, which would comprise of retired Judges.

The Secretariat would be endowed with the power to evaluate complaints against the Judiciary, and recommend the subsequent course of action.

The Judiciary however has time and again expressed its reservations regarding inclusion of such a provision, claiming that it would encroach on their independence. Currently, all complaints against the Judiciary are referred to the CJI, who then decides the mechanism to deal with them.