A Child has a right to get promotion, even in a unaided minority institution upto elementary education level; Kerala HC [Read Judgment] 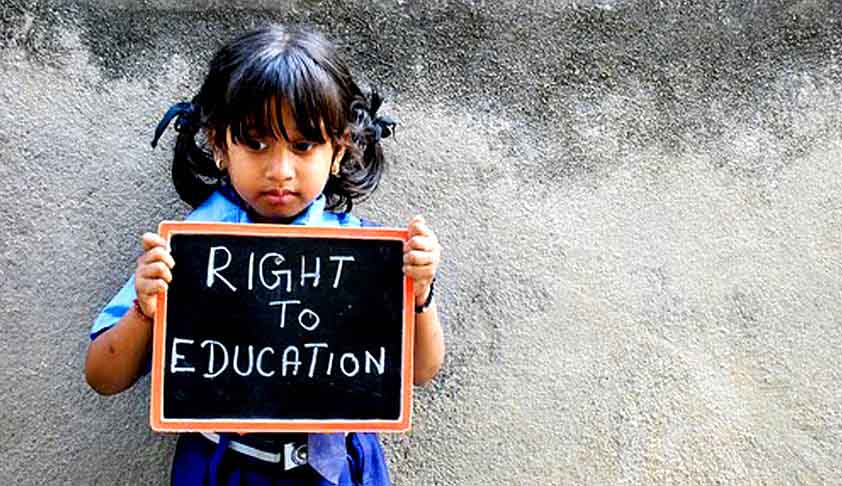 High Court of Kerala speaking through Justice Muhamed Mustaque, in Mrs Sobha George Adolphus v State of Kerala and others has ruled that a child has every right to get promotion, even in a unaided minority institution upto elementary education level.The issue in the writ petition is regarding the denial of promotion to the grand child of petitioner from 6th to 7th standard at St.Joseph...

High Court of Kerala speaking through Justice Muhamed Mustaque, in Mrs Sobha George Adolphus v State of Kerala and others has ruled that a child has every right to get promotion, even in a unaided minority institution upto elementary education level.

The issue in the writ petition is regarding the denial of promotion to the grand child of petitioner from 6th to 7th standard at St.Joseph Public School, Pattanakkad, Cherthala, during the academic year 2015-16. Petitioner's claim is based on Section 16 of the Right to Education Act ( “RTE" Act). Petitioner approached the various authorities, including the Government. Though the Government issued certain directions, those directions were not complied with by the school authorities, stating that, the school is an unaided recognized minority institution. An order was passed by the Kerala State Commission for Protection of Child Rights, recommending the school authority to promote the child from 6th to 7th standard, forthwith. The order was passed on 13.10.2015. However, all attempts of the petitioner ended in vain, on account of non-compliance. Accordingly, the petitioner approached the Court.

Three questions were posed up for consideration before the court:- (i)Whether the writ petition was maintainable?(ii) Whether the child has got any fundamental right to seek promotion per se upto primary education level, relying on provisions of R.T.E act?(iii) Whether such a right if so available , could be enforced against a minority unaided educational institution?

The Court further on examination of the scope of section 16 of the R.T.E Act, armed with judicial precedents both Indian as well as foreign, commentaries and United Nations Convention on the rights of the child, opined that it would not be in the ‘best interests’ to detain the child at an age, before the child attained the age of discretion. The Court opined:-“The child upto the age of elementary school level is in the process of evolving a personality. In this formative period, the child conditions his learning skills without discretion. The fixation standard upto elementary school in Section 16 of RTE Act is obviously by taking into account adolescence of the children. On pubertal changes, adolescents become more independent and would be in a position to assess their own ability and can mould themselves to correct the defects existing in their performance. Any denial of promotion before reaching the age of discretion would have an impact on their emotional state and feelings, and in that sense, it amounts to negation of 'best interest value' horizontally affecting right to life of the child.”

The Court further added :- “It is to be noted that, if a child with normal ability fails in any examination conducted by the school, it must be treated as the inability of the teachers of the school. If the child suffers from any cognitive skills in performance, the school authorities must address the issue through compensatory education. Any treatment of issue related to non-performance by denying promotion, no doubt, can be treated in the light of the afore-noted study as a negative approach denouncing the best interest status of the child about his educational needs or requirements. Section 16 of RTE Act, in fact, commands all school authorities to initiate a constructive approach in moulding the best interest status of the child upto elementary school level. Articles 28 and 29 of the UNCRC oblige the State to take measures to protect the right of a child to education. Specifically Article 28(e) provides that the State is obliged to take measures to encourage regular attendance at school and reduction of drop out rates. Article 29 of the UNCRC also directs the State to take steps for the development of child personality and to respect human rights and fundamental freedom and for the principles enshrined in the Charter of UNCRC. Thus,the best interest principle obliges every State and non State act or to obey the directives. Thus, it is a constitutional obligation for every State and non State actor to ensure reduction of drop outs from the school by taking affirmative actions to secure 'best interest' of the children.”

The court then went on to hold that with due reliance to Section 16 of R.T.E , that every child had a fundamental right, to get primary education upto elementary level as means to right to life as enshrined under Article 21 of the Constitution of India.

On the question of extent of the right of a minority institution with due regard to the exercise fundamental right of child to receive elementary education, the court held as follows:-“Article 30 (1) of the Constitution protects the rights of the minorities to establish and administer educational institution of their choice. This is essentially a right to create a feeling of security among minorities and a declaration that they will be treated at par with the majority in all respects. Minority institutions have no superior right that can be claimed by them in terms of the Constitution to deny rights of others. The right, as guaranteed under Article 30(1), is to protect the mere right to retain the character of the distinct nature of the culture, social identity, etc. of the minority status. Thus, the special provision is provided to permit them to establish and administer institution such that it retains its identity and character. No minority can be heard to say that to protect their identity, they have a right to trample upon the rights of others which are asserted or claimed not in derogation of goals of Article 30(1) of the Constitution. No right of minority will be affected if a child is ordered to be promoted to a higher level class. As has been noted, protection as envisaged under the Constitution is to protect the minority character of the educational institution. Therefore, when denial of others' rights by such institutions have no nexus or relation with the object of the protection, court has to denounce upon such claim.”

The Court then directed the school authorities to pay a compensation of Rs 25,000 to the student .The compensation has been directed to deposited as a fixed deposit with interest payable for the benefit of the child till the child attained the age of 18 years. The Court also imposed a further cost of Rs 10,000/-on the school authorities to be paid to the petitioner within a month for failure to comply with the order of the Government and Kerala State Commission for protection of child rights.