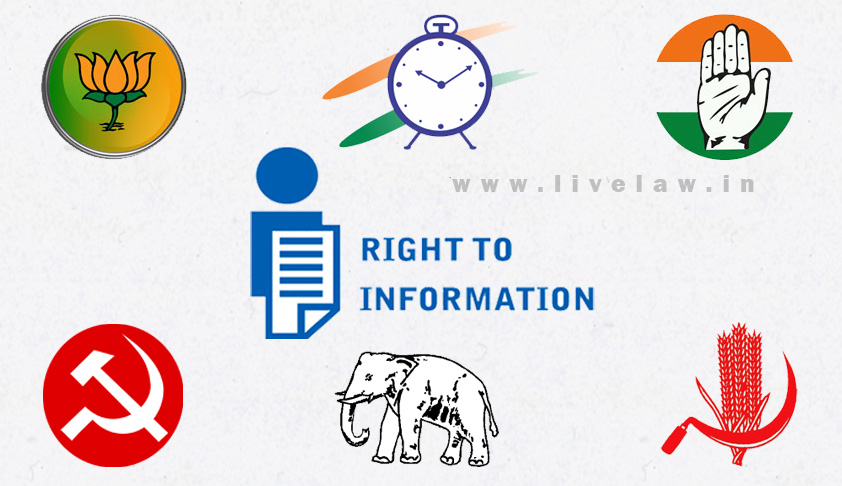 Opining that “in principle, every legislature/parliamentary party shall be considered as public authority”, the Central Information Commission (CIC) has called for views from the BJP and other political parties as to why legislature/ parliamentary parties should not be brought under the purview of RTI Act and why were they not disclosing voluntarily the selection of work and use of...

Opining that “in principle, every legislature/parliamentary party shall be considered as public authority”, the Central Information Commission (CIC) has called for views from the BJP and other political parties as to why legislature/ parliamentary parties should not be brought under the purview of RTI Act and why were they not disclosing voluntarily the selection of work and use of funds under the MPLAD scheme.

Information Commissioner M Sridhar Acharyulu invited the views of all political parties with presence in the legislative houses at the Centre and the States on the issue while also calling the civil society, including NGOs and individual citizens, before September 8, 2017.

The order came on a complaint filed by Vishnu Dev Bhandari, who had sought information for the progress of the works undertaken in Khatauna block of Madhubani district, Bihar, under the Member of Parliament Local Area Development scheme (MPLADS). Under the RTI Act, he sought the action taken report.

The Ministry of Statistics & Programme did not bother to respond his query, at which he had also asked whether he should ask the MP concerned.

“The voter-appellant was furious over non-response of the public authority. His questions appear to be genuine and quite democratic. If not, the voter who would ask the representative or agency that executes the works for which the representative has allocated funds? If a voter sought information about his representative in Parliament regarding the progress of works initiated under his MPLADS, it has to be appreciated as proper use… A voter has every right under the RTI to know about selection of works, progress, incomplete works, the delay, reasons thereof and possible time of their completion,” Acharyulu said.

While asking the first appellate authority to explain why disciplinary action should not be recommended against him for not taking up the first appeal, the Commission directed “the PIO/PA or PS of the concerned MP, Hukumdev Narayan Yadav to furnish the details of the works recommended by him, the criterion of selection or rejection and progress of the work etc before 7th September 2017”.

It said the MPs, who take oath of secrecy, have the duty to provide information on the use of Rs. 5 crore tax payers’ money under the MPLAD scheme.

“Considering the possibility of policy or guidelines being issued from the Parliamentary Party of the BJP, in which the concerned MP is the member, invites the views/contentions of the Government Chief Whip, the Leader, and Deputy Leader (LS) of BJP, or any other authorized representative as to why the BJP Parliamentary Party should not be declared as ‘public authority’ under 2(h) of RTI Act, 2005, on 7th September 2017 at 2 pm before this Commission.

“As the BJP Parliamentary Party is the ruling party of the Government of India, proclaimed its commitment to transparency and clean government, the Commission recommends to voluntarily disclose the criterion for selection of works under MPLADS along with constituency-wise works list and their progress with regular updating, on their official website/websites of the party or Legislature Party or individual MPs, if they have any, to fulfil their democratic obligation to inform the voters of India, within reasonable time,” it added.

“The Commission considers that it is required and that will be appropriate for all other parties, who have presence in their respective legislative houses at centre or states, also to express their views on the point why their respective legislature/parliamentary parties shall not be brought under the purview of RTI Act, as public authorities and why not they disclose such information voluntarily.

“Apart from political parties in centre and states, the Commission also invites civil society including NGOs and individual citizens having concern for democracy and transparency to express their opinion/contentions or views on the issue of bringing legislature parties/parliamentary parties under the purview of the Right to Information Act, 2005, to provide people access to information, by email to [email protected] before 8th September, 2017,” it ordered.